Skip to the content
HomeWritten PostJosh Reviews William Goldman’s Which Lie Did I Tell? More Adventures in the Screen Trade 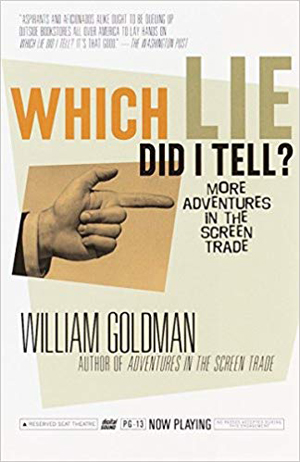 Josh Reviews William Goldman’s Which Lie Did I Tell? More Adventures in the Screen Trade

This sequel is every bit as entertaining and insightful as the first book!

As with the first book, Which Lie Did I Tell? is half a recounting of Mr. Goldman’s work as a screenwriter on a variety of film projects (some successful, some not) and half a how-to instructional manual for writing screenplays.  Both aspects of the book are fascinating, and Mr. Goldman has merged these two very different goals incredibly smoothly.

His writing is phenomenal.  The book reads as though Mr. Goldman were right there next to you, telling tales of his many years navigating the perilous waters of Hollywoodland.  There’s a casual naturalism to the prose that is compelling and that sucked me right in.  Even more importantly: throughout, Mr. Goldman is hilarious.  This book is so funny.  Mr. Goldman’s writing is frank and honest — which is why it’s so funny… and also why it’s occasionally heartbreaking!  There’s ugliness in the movie-business, and some of Mr. Goldman’s descriptions of the egos and political maneuvering behind the scenes of making movies is painful.  I was impressed throughout by what feels like a pull-no-punches approach by Mr. Goldman to show us the good, the bad, and the ugly.

The first section of the book is probably my favorite part, as Mr. Goldman tells us the stories of his work as a screenwriter in the eighties and nineties (picking up where Adventures in the Screen Trade left off).  In these chapters, we read about Mr. Goldman’s experiences involved with Memoirs of an Invisible Man, The Princess Bride, Misery, Maverick, and more.  I found these chapters to be endlessly fascinating, as we follow the behind-the-scenes stories of the making of those movies, and get Mr. Goldman’s perspectives on what worked and what didn’t, where those projects went right and where they went wrong.  As someone who loves movies in a serious way, I found this peek behind the curtain to be incredibly compelling and endlessly interesting.

In the second section of the book, Mr. Goldman presents a series of scenes from screenplays by other writers; scenes that Mr. Goldman loved and admired.  We read the full scene as it was written in the film’s screenplay, and then Mr. Goldman digs in with an analysis.  The scenes presented are from There’s Something About Mary, When Harry Met Sally, North by Northwest, The Seventh Seal, Chinatown, Fargo, and finally, Mr. Goldman’s own Butch Cassidy and the Sundance Kid.  Now, I’m not planning on becoming a screenwriter, but nevertheless I found this section to be fascinating.  It was a hoot to read these famous scenes as they were originally written in screenplay form, and Mr. Goldman’s dissection of them was very interesting.  There are a lot of fascinating lessons about being a writer — in any format/medium — in this section.

In the next section, Mr. Goldman presents four pieces of material that he suggests could potentially be used as the basis for a feature film screenplay, and follows them with a deep-dive analysis of the strengths and weaknesses these stories have as something around which to build a screenplay.  This is a very interesting approach to a discussion about screenwriting.  It’s very interesting to hear Mr. Goldman’s perspective on what types of stories he thinks do and don’t work as screenplays.  (Mr. Goldman considers both a screenplay as a thing unto itself and also as a tool to get a movie made… which, Mr. Goldman reminds us, are two very different things!)  This section allows us a look inside Mr. Goldman’s thoughts on screenplays themselves as a very specific type of writing.

In the fourth and final section, Mr. Goldman presents a screenplay that he wrote specifically for the book.  He then sent that screenplay to several other top screenwriters (Peter & Bobby Farrelly, Scott Frank, Tony Gilroy, Callie Khouri, and John Patrick Shanley), and their comments and feedback on the screenplay are included at the end.  I wasn’t sure I’d be interested in this final section and I considered skipping it altogether — but I started reading and quickly got sucked in.  I’m glad I did, because the screenplay was interesting and the other screenwriters’ analysis of it was absolutely fascinating.  Very cool.

Now I want to go and (re)-watch some of the great William Goldman’s movies!!