Skip to the content
HomeWritten PostNews Around the Net! 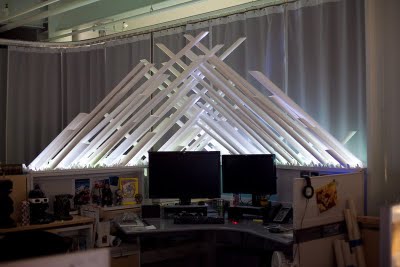 News broke yesterday that Sam Raimi’s planned Spider-Man 4 has been scrapped, and the studio is going ahead with a total reboot of the series.  DeadlineHollywoodDaily broke the story.  Personally, I’m bummed by this news.  Though Raimi & co. broke my heart with the atrocious Spider-Man 3, the first two Spidey flicks were so great that I really wanted to see him come back and try to return to the greatness of those first two films.  I hate that his run on the character is ending on such a low note, and the idea of rebooting a series that is only eight years old and wildly successful just seems insane to me.  But hey, I’m the guy who also wants to see Bryan Singer make another Superman film.

I have not read any of the Twilight books, nor seen the movies, nor do I have any intention of doing so.  But this piece over at CHUD about why Breaking Bad (the fourth and final Twilight book) MUST be made into a movie is absolutely hysterical.

Behold the weirdest wedding video I have ever seen.  This dude had his friends in the wedding party act out scenes from Superman II.  I am at once awestruck and disturbed.

Speaking of slightly-insane Superman fans, a few weeks ago I stumbled upon photos of this guy who decorated his office cubicle as the Fortress of Solitude.  Check it out:

You can find the full story behind his crazy construction project here.

Then there’s this incredibly bizarre stop-motion animated interview with Fantastic Mr. Fox director Wes Anderson.  Except Wes Anderson is played by Jason Schwartzman.  You read that right.  Check it out.

In case you haven’t seen it yet, a super-cool new trailer for Iron Man 2 came out last month.  Take a look.  I was an enormous fan of Iron Man (read my review here), and have high hopes for the sequel.  Don’t break my heart, Mr. Favreau!  (By the way, in re-reading my review of Iron Man, I can see that I was sure that the Mandarin would be a key villain in the sequel.  It’s not looking that way… so I’m wondering whether that character factors into the story at all.  I certainly hope he does!)

Speaking of trailers, let me lay a few more on you.  Here’s a sort of weird new trailer for Ridley Scott and Russell Crowe’s latest collaboration: Robin Hood.  Take a look.  This seems like familiar ground for Scott and Crowe, and I can’t say that I have been lying awake at nights waiting for a new version of the Robin Hood story.  That being said, it’s Ridley Scott, so of course I’m interested.  Let’s see what he’s got.

Here’s a phenomenal short trailer introducing the character of Hit Girl from the new film Kick Ass.  I have quite enjoyed this comic book series from Mark Millar and John Romita Junior (read my thoughts on the series here), and am really jazzed to see the film adaptation.  Here’s a longer trailer that was released late last year.

Do we really need a Shrek IV?  Do I really believe it’s the final chapter, as the new trailer for Shrek Forever After promises?  No and no.

It’s been fascinating watching and reading about people’s wildly differing responses to James Cameron’s Avatar since its release last month.  (You can read my mostly positive review here.)  I mentioned the film’s familiar (and, when you boil away all the sci-fi trappings, fairly simplistic) white-man goes native story-line.  In addition to being a bit disappointing narratively, some have pointed out a larger issue with that type of story — and I must admit, this is something that has been bugging me a bit as well.  Annalee Newitz over at io9 has written a fascinating piece that explains this far better than I ever could.  Her article is called “When Will White People Stop Making Movies Like Avatar?” It is well worth your time.

Speaking of Avatar, here’s a fascinating article comparing the finished film with the 144-page treatment for the project (originally titled Project 880), that James Cameron wrote after finishing Titanic.  It’s an intriguing glimpse into Mr. Cameron’s original intentions for the film.

Lastly for today, here’s word that Seth McFarlane would love to do an extended parody on Family Guy of Star Trek II: The Wrath of Khan (in the style of Family Guy‘s recent hour-long parodies of Star Wars and The Empire Strikes Back).  That would be a ton of fun, I think.  Here’s hoping Paramount’s lawyers let the project happen.