Skip to the content
HomeWritten PostRagna Rok: The Hellboy Saga Draws to a Close! 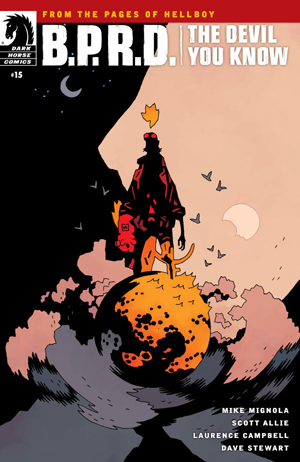 Ragna Rok: The Hellboy Saga Draws to a Close!

For twenty-five years, Mike Mignola’s Hellboy comics have been one of my very favorite comic book series.  This series has expanded from an occasionally-published series of mini-series and short stories to a vast universe of stories, with multiple interconnected stories chronicling over 100 years of the history of these characters and this universe.  This is my favorite currently-published comic book series!  I cannot recommend it highly enough.  (If you’re new to the Hellboy universe, you can dip your toes into the water with the Hellboy Omnibus vol. 01: Seed of Destruction, a relatively inexpensive lengthy collection of the first several Hellboy mini-series.)

Several years ago, I spent a long time re-reading the entire saga from the very beginning, and writing about it. In 2017 I checked in with the saga again, and in early 2019 I did the same.

In recent months, Mr. Mignola and his collaborators shocked me by, well, apparently bringing the entire twenty-five-years-long shebang to a conclusion!  In today’s age of hype-hype-hype, this ending caught me very much by surprise!  (Hellboy fans who aren’t all the way caught up: please beware SPOILERS in this blog post!)

B.P.R.D. The Devil You Know “Ragna Rok” #14-15 (2019) — Well, wow.  The whole Hellboy saga finally comes to an end, and events that have been hinted at in prophecies and visions for almost the entire twenty-five year run of this saga (so far) finally come to pass.  It’s a shockingly downbeat ending, in which most of our heroes die, and in fact almost every human being on the planet dies!  Yowza!

I’m conflicted, because on the one hand it is incredibly cool and satisfying to see this long-running story-line reach an ending.  As I have written about on this blog beforehand, there are precious few examples of when a long-running fictional saga is able to be brought to a strong ending, at a time and place of the creator(s)’s choosing.  It’s special when it happens.

I am impressed that Mr. Mignola and co. stuck to their guns and followed through on the long-running hints that this story was not going to end well for most of our characters.  In most stories like this, you’d expect the heroes to find a way to save the day in the end.  But not here.  It’s impressive to me that they delivered this dour ending.

On the other hand, I wish this final run of issues hadn’t felt so rushed.  The combination of Laurence Campbell’s scratchy writing and Scott Allie’s occasionally staccato writing style didn’t quite work for me as well as I’d hoped.  HUMONGOUS, series-shattering events happened in these final issues, but none of it landed as emotionally as it should have.

I loved seeing the “Visitor” aliens again, finally, in issue #14!!  That was super-cool.

I loved seeing the trinity of Hellboy, Abe, and Liz do battle with Rasputin in #14.  This felt like a great “full circle” moment, bringing me back to the earliest Hellboy adventures.  This was a cool development to see, though I wish the fight had been a little more interesting/exciting.

When Rasputin crunches Abe in his hands and threw him into the water, I had no idea that Abe was dead!  I didn’t realize that was what had happened until I got to the end of #15.  That’s a big problem, as the death of Abe should have been a huge moment.  But since we’ve seen Abe suffer plenty of grievous injuries before and recover, I didn’t think anything different had happened here.  Oops.

Howards also kicks the bucket in #14, and unfortunately his death felt as meaningless as so many of the other B.P.R.D. character deaths in recent issues.  This was supposed to be a heroic sacrifice, paving the way for the rest of the humans to reach Frankenstein’s sanctuary underground (Hyperberum).  (I loved seeing Frankenstein’s monster again, by the way!!  I’d been waiting for that for years.)  But the staging/pacing just didn’t work.  Howards’ death felt like it could have been avoided had he been a smidge smarter, and it didn’t seem to accomplish much.  (Why wouldn’t the monsters gave continued to pursue the humans once Howards was dead?)

In #15, it was shocking to see that, as long-predicted, the Ogdru Hem DID have their time on Earth — and it was a fun shock to see that they, and the Ogdru Jahad, were ultimately destroyed by the Osiris Club!  That was a nice twist!  I loved the bizarre image of the victorian house floating above the monster-infested surface of the Earth.  It was cool to see the Osiris Clubs’ techy gauntlets, which strongly resembled those worn by Rasputin in the very first Hellboy issue, Seed of Destruction #1.  I loved that Sir Edward Grey was with Hellboy in these final, dramatic moments.

I loved that Mike Mignola drew the final pages of this issue.  (Would that he could have drawn ALL of these last few issues!!  I think they’d have been much stronger.)  Those final pages were amazing, haunting and powerful.  I loved seeing Hecate again, as was predicted so long ago (all the way back in Wake the Devil, I believe!)

While I love the idea that Liz’s fire consumed the world in the end — that’s a cool way for the Hellboy story to end — I’m not so thrilled with this end for Liz as a character.  I love Liz, and after so much development over the years, I’m bummed that she was without any agency — or any character at all — here at the end.  Liz seemed in recent issues like she was at peace and in full control of her powers!  So what changed between the end of the last issue and this one, in which she was now basically a zombie with no ability to keep her fire in check?  I wish we’d gotten to see how she felt about what was happening, about the end of the world, about Hellboy’s fate, and about her role in this final transformation of the world we’d known into something new and different.

It was very unsettling to see Hellboy walk into Hecate’s Iron Maiden, where he appears to meet his final end.  It’s anticlimactic and disturbing in some ways… but also beautiful and poetic.  I love the moment — gorgeously illustrated by Mr. Mignola — in which Hecate  calls Hellboy by his name, “Anung Un Rama, Destroyer of Worlds”… and then bestows upon him his new name: “Urush Un Rama, Creator of Worlds.”  Powerful moment.

The final images of Abe’s frog-people descendants, and the image of Liz, suspended as if in amber, is — like so much of this issue — bizarre and unsettling.

It doesn’t all work for me, but wow, it is extraordinary that Mike Mignola was able to bring this story to the ending that he’d clearly been planning for decades.  It’s been a hell of a ride.

I wonder if we’ll get any future stories set further in the future, to explore life on this new world?

If not, there are still plenty of great stories yet-to-be-told, set in Hellboy’s past.  In recent days, two other mini-series, both set far back in the Hellboy timeline, also came to a close:

Hellboy and the B.P.R.D. 1956 #5 (2019) — This great mini-series comes to a very satisfying close with this final issue.  I love how these stories have woven in and around all of the previous “Somewhere in Mexico” adventures we’ve gotten over the years.  It’s fascinating to see those (mostly silly) stories fit into the larger context of Hellboy’s life, and this tough period in his life.  It’s unsettling to see how distant HB and Professor Bruttenholm remain at the end of this series, despite their sort-of reconciliation when HB finally returns to the Bureau… and it’s also unsettling to see how Bruttenholm’s habit of keeping secrets (in this case, the truth about Varvara) has pushed away Agent Xiang.  I can’t wait to see where this story goes next.

Crimson Lotus #5 (2019) — Another fun mini-series comes to a close.  After a fantastic first issue, I’m bummed that we didn’t wind up learn anything a little more substantial about the Crimson Lotus herself, or Daimio, in this series.  But I still enjoyed this story, and how crazy it got.  This issue was particularly wild, with the Lotus and her monkeys and other horrific creatures versus Daimio and Shengli and super-powered monks.  I was surprised by Varvara’s sudden appearance at the end.  It was an abrupt ending (and convenient for our heroes, who seemed quite outmatched by the Lotus), but it was fun to see Varvara pop up in this story.  (She was a major character in Hellboy and the B.P.R.D. 1956, too!).  I hope we see more of Shengli in the future.  She seems like an intriguing character.

I don’t know what’s ahead for Mike Mignola’s Hellboy series.  But I hope that, while the larger story appears to have ended in B.P.R.D. The Devil You Know #15, there will be many more Hellboy universes stories for us to enjoy in the coming years.  Certainly, the 1950’s-set Hellboy and the B.P.R.D. series seems to still have plenty of gas left in its tank.

Thank you, Mike Mignola and all your collaborators, for twenty-five years and counting of this amazing series!!  I can’t wait to see what’s next.  I’d love to see twenty-five years more.  Is that too much to ask…?