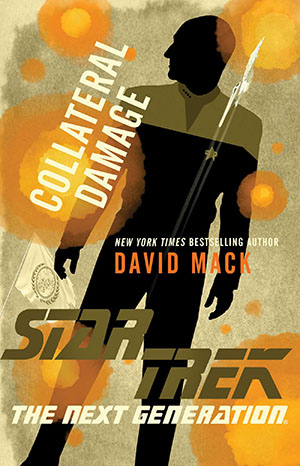 David Mack’s new Star Trek novel, Collateral Damage, looks to me like it might represent the conclusion of an amazing, almost two-decade-long experiment on the part of Pocket Books to create a connected continuity of Star Trek novels.

It began in 2001 with the publication of S.D. Perry’s Avatar, which launched a series of Star Trek: Deep Space Nine novels that carried forward the characters’ stories, following the DS9 finale, which aired in 1999.  It continued with the “A Time To…” novels, a nine-book series published in 2004, that were set in the months prior to 2002’s Star Trek: Nemesis, the final Star Trek: The Next Generation film.  In the years that followed, a vast tapestry of connected novels developed, and grew to include novels set across all the Trek series, including the Original Series, Voyager, and Enterprise.  Characters from different series would appear in various books, and character arcs and other storylines would continue from book to book, sometimes crossing between series.  Most of the novels were stand-alone stories, but together they fit into a wonderfully expansive tapestry.  I have written about a great many of those novels on this site.  I love continuity and I love epic stories, and these Star Trek novels have together represented a hugely entertaining saga that has given me so much enjoyment over the past two decades.

After November, 2017, Pocket Books temporarily ceased publication of new Star Trek fiction.  No formal explanation was ever offered, to my knowledge, though comments from some sources indicated that the contract with Paramount/CBS was being renegotiated.  I wonder if, behind the scenes, with the new Picard series in the works, there was also a question of how and if these Star Trek novels could continue.  I am excited for Picard (I thought the first episode was great) but I am certain that this new show will contradict huge swaths of the post-Nemesis story that has been crafted for Picard and the other TNG characters in these novels.  After a lengthy hiatus, I was delighted when Pocket books began publishing new Star Trek fiction again last spring, with Dayton Ward’s novel Available Light.  However, while new Trek novels will apparently continue, David Mack’s novel Collateral Damage looks like it might be that last novel set within this post-Nemesis continuity.  None of the Star Trek novels I see on the 2020 schedule seem to be connected to this continuing story.

I can certainly understand hitting pause while we all wait to see what story Picard will actually tell.  But I do hope that Collateral Damage is not the last Star Trek book in this continuity.  I’d hate for two decades of amazing story-telling to be abandoned.  I personally can accept the world of these novels and the world of the Picard show both existing, even if they contradict one another.

As for Collateral Damage itself, it’s a great book and an entertaining culmination to many story-lines that trace all the way back to those “A Time To…” novels from 2004. (I am really glad that, last year, during the break in new Trek novels, I took the time to go back and read that entire series, which I’d missed originally.  I’ve written blog posts about them which I haven’t published yet, but those will go up in the next few months.)  In those stories, Captain Picard was involved with a group of other Starfleet officers (including Admiral Ross from DS9 and Admirals Jellico and Nechayev from TNG) in removing a corrupt Federation President, Min Zife, from office.  That act was kept secret.  However, the ultimate defeat and public exposure of Section 31 (as chronicled in Mr. Mack’s novel Section 31: Control), means that Picard’s actions have been made public.  With the Federation and Starfleet in an uproar, Captain Picard has been called back to Earth to face a possible court-martial for his actions in deposing the elected Federation President.

I loved seeing in Available Light that our characters were facing the fallout from the public exposure of their actions, and Collateral Damage continues smoothly from that story, with the focus now on Picard.  It’s fun to see that Picard’s adversary in the legal proceedings is Phillipa Louvois, from “The Measure of a Man.”  Louvois has been elevated to the position of Attorney General of the United Federation of Planets, and she sees Picard’s actions as completely in contradiction to his sworn duty as a Starfleet officer.  Much of the novel is spent on the tense legal showdown between Louvois and Picard, and it’s great stuff.  It makes sense to see Picard’s choices called into question.  It’s a nice payoff to this long-simmering story-line.  The only weakness, for me, was that I thought Louvois’ fierce anger towards Picard in this book seemed somewhat in contradiction to the detente the two seemed to have reached with one another at the end of “The Measure of a Man.”

The other main story-line also concerns the fallout from another long-simmering storyline, that being the Borg’s decimation of huge swathes of the Alpha Quadrant in their final invasion, as chronicled in Mr. Mack’s 2008 Destiny trilogy.  One of the planets that the Borg destroyed was Nausicaa (the home of the thug-like Nausicaans, who were seen occasionally on TNG and DS9).  At the start of Collateral Damage, we meet a group of Nausicaans who blame the Federation for bringing the Borg to the Alpha Quadrant in the first place.  After they get their hands on a powerful Husnock weapon (a nice call-back to the third-season TNG episode “The Survivors”), they are in a position to take revenge on the Federation.  While Picard deals with his legal problems on Earth, Worf takes command of the Enterprise in an attempt to stop these terrorists.

I really like this Worf storyline.  It’s great to see that the galaxy-shaking events of Destiny haven’t been forgotten.  It makes sense that the tragic events of those novels would still be affecting the Star Trek galaxy, even several years later.  It’s nice to see some depth brought to the Nausicaans, who were mostly one-dimensional thugs when we saw them on TV.  Most importantly, it’s great to see Worf be able to use his unique skills and insight in order to find a peaceful solution with the Nausicaans in the end.  This is a great pay-off to Worf’s long journey, and everything he has been through.

I also enjoyed seeing the involvement of other characters from across the Trek galaxy.  Okona (from the second-season TNG episode “The Outrageous Okona”) has a lot to do in the book, as does Samantha Wildman (from Star Trek: Voyager), now grown up and working for Starfleet Intelligence, as is Sam Lavelle (from the seventh-season TNG episode “Lower Decks”).

The only downside of the Worf-Nausicaan story is that, while it’s a great story, it’s almost entirely disconnected from the Picard story, and it could have been the B-story in any other Star Trek novel.  If Collateral Damage is indeed going to be the final book in this long-running series, it seems a shame to me that half of the novel was spent on this story that could have fit into any other novel.  There are so many other character-arcs that I’d have loved to have seen given closure.  How about Geordi and his relationship with Dr. Tamala Harstad (which is ignored until the novel’s final few pages)?  How about more of what happened to the other Starfleet officers involved in the removal of President Zife (most of whose story-lines were left somewhat hanging at the end of Available Light)?  I could give lots more examples.

Mr. Mack does an interesting thing, in that several of the chapters in the novel are told from a first-person perspective.  This is very unusual for a Star Trek novel.  Even more unusual is that these first-person chapters bounce between several different characters, so that we get the story told from different points of view.  I really like the use of this first-person perspective, as it allows us to explore certain characters more deeply.  However, the shift between different characters was confusing to me in the early-going of the novel, as I was occasionally uncertain at first as to whose perspective we were following.

Overall, Collateral Damage is a very strong, entertaining new Trek novel.  It’s a great next step in this long-running saga, one that moves the characters forward while also looking back and tying off several loose ends.  On its own, this is a terrific book, without question.  It’s only as the grand finale to this whole endeavor that the book suffers a little bit, in my estimation.  If this is indeed the final novel in this saga, this isn’t everything I’d hoped it would be.

But, for now, hope springs eternal.  I hope that, after Picard airs, many more new Trek novels set in this connected universe will be published.  If not, I am very grateful for this amazing two-decade-long experiment.  It has given me so much pleasure over the years.