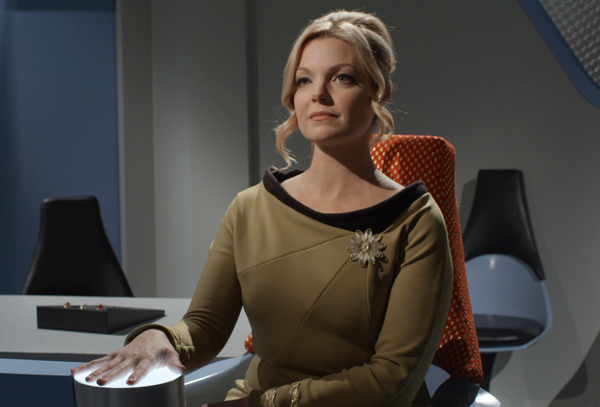 Yesterday was the fiftieth anniversary of the premiere of the original Star Trek on NBC.  Fifty years.  That’s incredible.  Despite Paramount/CBS’ draconian attempts to shut down all of the Star Trek fan film projects (by halting production of the Axanar film and then releasing new fan film guidelines that would effectively eliminate most of the most popular and successful Star Trek fan film projects), the fine folks at Star Trek Continues recently released their seventh full-length episode: “Embracing the Winds.”  I couldn’t think of a better way to enjoy the fiftieth anniversary of Trek yesterday than by watching this wonderful fan-made episode.  Star Trek Continues’ initial vignette picked up just at the end of the final Original Series Trek episode, “Turnabout Intruder,” and with their seven (so far) produced episodes they have been creating what would have been the fourth season of the original Star Trek series, new full-length episode adventures of Kirk, Spock, McCoy, and the rest of the crew of the original Enterprise (“no bloody A, B, C, or D”).

In their newest episode, “Embracing the Winds,” Kirk and Spock are summoned to a starbase so that Spock can be promoted to command of the USS Hood, whose crew were killed due to an unexplained failure of the ship’s life-support system.  However, a female officer, Commander Garrett, challenges this decision, claiming that she has been unfairly passed over for command of the Hood because she is a female.  Meanwhile, Scotty takes the Enterprise to recover the Hood, but what seems like a simple job of towing the ship back to the starbase soon turns perilous.

As with every episode of Star Trek Continues, “Embracing the Winds” is extraordinarily faithful to the look and “feel” of a classic Star Trek episode.  Vic Mignogna and his incredible team have once again done spectacular work in recreating the sets, costumes, props, music, and every other aspect of an Original Series episode.  The result is jaw-dropping.  This is a true labor of love by a dedicated group of Star Trek fans and I doff my cap in respect to their tremendous efforts.

This is a solid episode, in my opinion one of the stronger efforts by the Star Trek Continues team.  I’ve mentioned in earlier reviews that some of the Star Trek Continues episodes have felt a little simplistic or by-the-numbers, unfolding without too many surprises.  But both the A and B stories in this episode are very compelling and with good mysteries.  As a viewer I wondered what Scotty was going to discover when investigating the Hood, and I also wondered how the story of Commander Garrett’s challenge of Spock’s new captaincy would unfold.  Obviously, any Star Trek fan knows that Spock was not going to leave the Enterprise, but as we got to meet Commander Garrett there were enough questions raised about her background that her quest to become Captain of the Hood (in place of Spock) was far from a done deal.  The episode was well-structured in that I the viewer, just like Captain Kirk, began the episode feeling confident that Garrett should and would be made Captain of the Hood rather than Spock, but as events unfolded I, like Kirk, began to doubt.  This kept me engaged with both stories until the end, rather than predicting after ten minutes how everything would unfold.

The episode was filled with some lovely little nods to Trek continuity.  I enjoyed the discussion early in the episode about the history of the United Federation of Planets and how the UFP arose out of the conflict with the Romulans (which has long been a part of Trek backstory that was fleshed out in Pocket Books’ post-Enterprise-set Romulan War novels).  I also enjoyed the set-up, at the start of the episode, that Starfleet was starting to feel the loss of so many of its Constitution class starships (several of which we saw damaged or destroyed in various Original Series episodes as well as in previous Star Trek Continues episodes).  I liked that the Vulcan Vice Admiral Stomm challenges Spock on his decision to withdraw from the Vulcan Science Academy (an event we saw dramatized in the beginning of JJ Abrams’ 2009 Star Trek film), and I loved the mention of the “Tucker medal of honor” (clearly named after a character from Enterprise).  I also enjoyed the reference to the events of “Lolani,” an earlier Star Trek Continues episode. And I loved getting to see a Tellarite at the end!!  (Even if the mask/make-up left a little to be desired.)

This episode boasted some great guest stars.  Beau Billingslea (who appeared in Star Trek Into Darkness as Captain Abbott of the USS Bradbury) played the afore-mentioned Vice Admiral Stomm with tremendous gravity.  Clare Kramer (from Buffy the Vampire Slayer and Bring it On) played Commander Garrett.  And Erin Gray (Buck Rogers in the 25th Century) returns as Commodore Gray.  (She popped up previously in “Lolani”, and here in this episode she has a far more substantial role.)  I also loved once again hearing Marina Sirtis (Counselor Troi) as the voice of the Enterprise computer.

There are a few weak points in the episode.  Grant Imahara does some bizarre over-acting in the teaser as Sulu.  I’m unclear how/why the computer would judge Spock as lying when he asserts that emotion played no part in his decision to decline admission to the Vulcan science academy.  I’m also unclear on what exactly Chekov does to get the Hood’s shields down so the Enterprise can beam back their away team — he does some sort of techy thing but I couldn’t understand Chekov’s dialogue to understand exactly what.

More problematically, while I felt that both the A and B stories had terrific set-ups, neither had the payoff I’d been expecting.  I am shocked that we never found out a) what happened on the Hood to cause the life-support to malfunction, killing the crew, and b) what then happened to cause the engines to fire, almost killing Scotty and the whole away team.  How could this episode not give us an answer to those mysteries?  Is this something that will pay off in a future episode?  I certainly hope so, because for now this episode left me very unsatisfied with that total lack of resolution.

I was also surprised that we didn’t get any scenes late in the episode to better understand Commander Garrett or why she reacted so abruptly when Kirk asked her about that landing party on Nimbus III (nice nod to Star Trek V: The Final Frontier, by the way).  The episode clearly wants us to be rooting for the case of equal treatment for women.  I love this as a central theme of the episode, particularly in light of the terribly out of date events of “Turnabout Intruder,” the final Original Series episode, in this area.  But why then is Commander Garrett set up as so unstable?  I was sure we’d get a scene later in the episode in which she’d get a nice juicy, emotional monologue explaining what happened on that ill-fated landing party and how she’d been stigmatized for those events ever since, or misjudged in light of those events because of her gender.  She does get a nice speech about equal treatment for women at the end of the episode, but by that point we’ve been given enough reasons to doubt her character that the speech comes off as self-serving, rather than the noble message that I believe the writers intended it to be.  By leaving us in the dark as to what actually happened in Garrett’s past, it’s hard as a viewer to know whether we’re supposed to be rooting for her to be awarded the Captaincy of the Hood or not.  I am all for complexity and ambiguity in story-telling, but it doesn’t feel like this worked the way it was intended.

(Though I did LOVE the line at the end of the episode, connecting Commander Garrett with another memorable character with the same last name from The Next Generation!)

Over-all, I quite enjoyed this episode.  It’s another extraordinarily impressive piece of work by these volunteer Star Trek fans, done purely for their love of Trek.  Watching this episode only twists the knife further for me with regards to Paramount/CBS’ recent efforts to shut down all of the Star Trek fan productions.  No one is doing this to get fortune and glory.  These episodes are love-letters to the Star Trek franchise.  The fans making and watching and supporting these efforts are not the enemy — they ARE the fan-base from whom Paramount/CBS wants to make money!  So how about showing some love and support toward these fans, rather than working to crush their efforts?  It looks like Axanar will now never been made, and the latest word from James Cawley’s Star Trek: Phase II/New Voyages is that they are shutting down and might never release their in-production episodes.  This is heartbreaking.  I’m encouraged that Star Trek Continues has released this new episode, but saddened that Vic Mignogna is now talking about bringing his series to a close as well with a few final episodes.  I don’t believe this timing is coincidental.  I am very excited for new “official” Star Trek product, specifically the in-production series Star Trek: Discovery.  I’ll continue giving CBS/Paramount my money by paying for CBS All Access to watch this series.  I am sure I will buy Star Trek Beyond on blu-ray and I’m sure I’ll continue buying Star Trek novels and soundtrack CDs and lots of other merch.  These Star Trek fan-film projects are not in any way going to stop Trek fans from continuing to support (and spend our hard-earned money on) any “official” Trek products.  The heart of Star Trek is in its fans, and it has been for fifty years.  I have enormous respect and admiration for these different groups of fans and their labors of love, and I hope that I and everyone else are allowed by Paramount/CBS to continue to be able to enjoy their hard work for many, many years to come.  We’ll see…