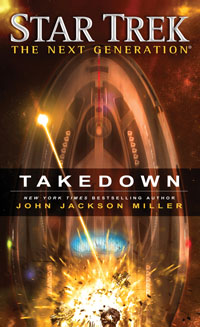 I am having a lot of fun getting caught up on the last year or so of Pocket Books’ Star Trek novels!

In 2013’s terrific five-novel crossover series, “The Fall,” a vicious assassination on board Deep Space Nine sends all of the major galactic powers — most notably the Federation and the newly-created alliance of many of their enemies called the Typhon Pact — on a collision course with one another.  I loved “The Fall”, and the conclusion of that series left me eager to see the new status quo of the Trek universe explored as the novel series moved forward.

And so I was particularly looking forward to John Jackson Miller’s novel Takedown, first of all because this would be the first novel focusing on the newly-promoted Admiral Riker, and I was eager to see where the writers would be taking Riker next.  Would he remain Earthbound, of would he still be connected in some way to the ship, Titan, that he had captained through the past almost-decade’s worth of wonderful Titan novels?  I was also eager to see the crossover that this novel promised between Riker and the Titan characters , Captain Jean-Luc Picard and the Enterprise, and also Captain Ezri Dax and the crew of her ship the Aventine.

Unfortunately, I found Takedown to be a little disappointing.  I have written many times on this site about how much I hate mind control stories.  It always feels an excuse for “fake” drama, motivated by a character behaving in a manner that he/she ordinarily never would.  Sadly, very quickly in Takedown it became clear that this was one of these stories, as Admiral Riker attends a mysterious peace summit only to return changed.  (I would have vastly preferred had their been a legitimate reason for Riker, Picard, and Dax to be put at odds, perhaps an ethical dilemma without a clear right-and-wrong answer.  That would have felt like more genuine drama to me, and therefore more worthwhile.)

It’s unclear to me whether Mr. Miller intended Riker’s transformation to be a surprise for the reader when the truth of what happened to him at the peace summit is revealed about halfway through the novel.  It seems to me that this was likely WAS intended to be a surprise, because we don’t actually read in the novel the scene in which Riker is altered.  We just see him arrive at the peace summit and then, when next we see him, he is returning to Titan.  (Had Mr. Miller intended the reader to be in on what was happening, I suspect we would have gotten a chapter in which we saw Riker get changed.)  But it was painfully obvious to me right away that Riker was being controlled.  If it was Mr. Jackson’s intent that this would be a mid-novel surprise for the audience, he failed in that.  I found the first half of the book to be frustrating as I waited with impatience for the other characters to catch up to what was clear to me was going on.

I found the novel’s second half to be far more enjoyable.  First of all, when Mr. Miller did finally reveal what had happened to Riker, I very much enjoyed the revelation of who was behind that, and why.  At this point it became clear that the novel was in fact a sequel to a wonderful Next Gen episode.  (I won’t reveal which episode as that would spoil the surprise, but I will say that it’s a great episode that definitely was a fine choice for a follow-up.)  Also, once all the characters were aware of what was happening, I enjoyed the story far more.  The fast-paced game of interstellar strategy, with various characters and players on different ships and with different agendas struggling to outplay one another, was fun and enjoyable.

There are some nice touches of continuity in the book, such as making note of the Cardassian exchange officer Dygan’s harrowing experiences undercover in “The Fall,” in the (excellent) Cardassian-centric novel The Crimson Shadow.

But unfortunately, for the most part, while Takedown was heavy with incident, it was light on character development.  The fast-paced action, particularly in the book’s second half , is a lot of fun, but there’s not much time or attention given to the individual characters and their stories that we have been following through the past many years’ worth of wonderful, interconnected novels.  The result is that Takedown winds up being very much a stand-alone story.  While perhaps the events of this novel will be followed up on in future novels that will explore the ramifications of these events, in this first reading Takedown winds up feeling fairly skippable, not an indispensable part of the continuing Star Trek saga being created in these novels.  Luckily, the next two books were far more satisfying to me.  I’ll me back here soon to talk about them!