Skip to the content
HomeWritten PostStar Trek Lives! Josh Reviews Episode 6 of Star Trek Continues: “Come Not Between the Dragons” 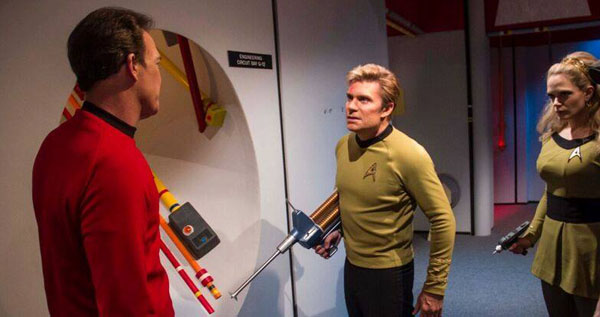 I continue to be extremely impressed with Star Trek Continues, the fan-series spearheaded by Vic Mignogna.  As I have written about many times here on this site, Star Trek Continues is a fan-made series that has set out to create a fourth season of classic Star Trek, creating complete episodes depicting the further adventures of Kirk, Spock, McCoy, and the crew of the original U.S.S. Enterprise (“no bloody A, B, C, or D”).  Not only do Mr. Mignogna and his team manage to create extraordinarily professional-looking efforts — if you saw one of their episodes on TV, you very well might believe you were watching an actual episode of the Original Series — but they’re also able to do so on a regular basis.  They are already on their sixth episode, and this latest installment, “Come Not Between the Dragons,” is terrific.

As the episode opens, the Enterprise is struck by an object that manages to pierce the ship’s hull.  What at first was thought to be a meteor is quickly revealed to be something else, as the object begins to move through the ship of it’s own volition.  When it lands in the quarters of Ensign Eliza Taylor (played by Farscape’s Gigi Edgley), she realizes that the rocky object is a sentient being, and she attempts to learn who it is and what it’s purpose is on board the Enterprise.  The threat to the crew posed by the creature is soon dwarfed by another, much larger version of its kind, which as it approaches is able to send waves of anger and negative energy that infects Kirk and the Enterprise crew.  Can Kirk and his crewmates gain control of their emotions in time to solve the mystery of these creatures?

Written by Greg Dykstra and James Kerwin and Vic Mignogna, “Come Not Between the Dragons” is a fun, tightly-paced sci-fi mystery/adventure.  The episode manages to balance some nice character beats for almost every member of the Star Trek Continues ensemble with an exciting adventure story.  This feels very much like a classic Trek story, as the Enterprise crew investigate a strange, new life-form.

The Star Trek Continues folks have been able to nab some very high-profile guest-stars for their episodes (Lou Ferrigno was a particular delight as an Orion in the series’ second episode, “Lolani”), and featuring Farscape’s Gigi Edgley here is another fun surprise.  Ms. Edgley is a lot of fun as the sensitive Ensign Taylor, who quickly bonds with the strange rock-like life-form that has crashed into the ship.  (Though I do wish Ensign Talyor wasn’t quite so cowardly when the creature first smashed into her quarters — come on, you’re a Starfleet officer!)

If there’s one down-side to Star Trek Continues’ propensity for guest-stars, it’s that the focus on the guest star can detract focus away from the show’s main cast.  It’s been six episodes, and Scotty, Uhura, Sulu and Chekov have still not yet had much to do.  As much as I enjoyed Ms. Edgley’s work, I would have preferred had it been Uhura or Sulu or Chekov who was the one who bonded with the creature and so was at the episode’s focus.

I did enjoy seeing some of the side characters who have been popping up throughout Star Trek Continues have some fun things to do in this episode.  Security officer Drake is back, and Kipleigh Brown’s Ensign Smith finally gets some nice focus.  I was also very pleased to see that this episode finally found something interesting for Michelle Specht’s Dr. McKenna (introduced in the first episode as a counselor on-board the ship) to do.  (I love that scene of her knocking out McCoy!)  In fact, this episode had a nice focus on all the female members of the cast — I liked seeing the friendship between Uhura, McKenna, and Smith, and also Ensign Taylor — and it was great to see those females kick ass towards the end.  We also finally learned Ensign Smith’s first name!

As always, the show’s production values are superb.  The sets, costumes, props, lighting, music — all are spectacular, perfect recreations of the tone and feel of the Original Series.  This episode also provided a nice showcase for the series’ new Main Engineering set, which was a joy to see.  There weren’t too many outer-space visual effects in this episode — this was a very internal episode — but what shots there were in the episode were gorgeous as always.  I particularly enjoyed the beautiful comet/nebula at the end.

I was also impressed by the practical effects used to realize the rock creature.  I don’t recall any other fan films or series daring to undertake a practical all-costume alien creature like this, and I was impressed by how well the Star Trek Continues team was able to pull this off.  The creature was convincing and never looked silly.  Bravo.

As has been the case for several Star Trek Continues episodes, this one veered a teeny bit too far into schmaltz at the very end.  I respect the Continues team for always trying to ensure that their episodes are each about SOMETHING, not just silly escapism.  Nevertheless, the drama about neglectful fathers that entered the story at the very end felt a little out of left field, and Ensign Taylor’s tearful monologue was not quite earned.

I have a few other quibbles.  (Beware SPOILERS in this paragraph!!)  I don’t love stories of mind-control or influence, and so I didn’t love that aspect of this particular episode.  I was also a little bummed that they wound up going with the “this powerful alien is actually a child” development that has been done to death on Trek.  I wonder if that aspect of the story was intended as an homage to a classic type of story from the Original Series.  If it was, I think that was a mistake, because I was hoping for a more original twist at the end.  There was also a weird plot hole in which we are specifically told that the transporters won’t work on the rock creature, and yet later in the episode several characters, including the rock creature, are able to beam over to Engineering without any trouble.  Oops.  I was also a little surprised that, towards the end, they had Spock suggest handing over the creature to the other, more threatening one — I’d expect Spock to be more staunch in standing up for the right thing to do, rather than the easier path.

Watch “Come Not Between the Dragons” yourself right here: