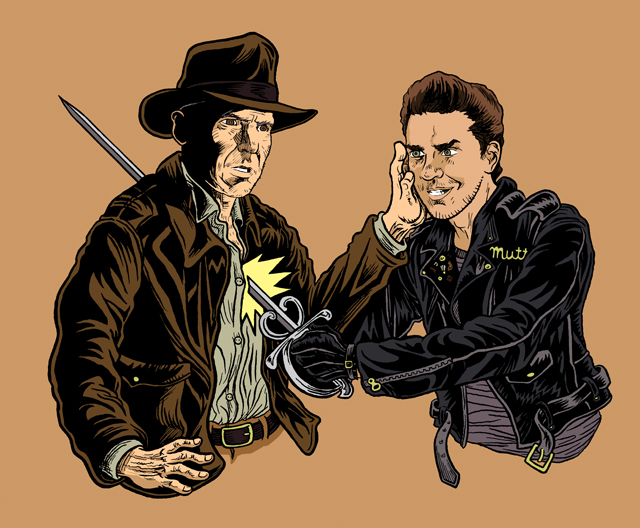 UPDATED WITH THE FORCE AWAKENS TRAILER! News Around the Net

Late-breaking update to my last post — take a gander at this new trailer for Star Wars: The Force Awakens!! WOW that is a hell of a trailer.  I love hearing Mark Hamill’s voice-over, echoing his words to Leia in Return of the Jedi.  Love the shot of the crashed Star Dest

New Around the Net

Ok, I thought the first Guardians of the Galaxy trailer was awesome, but this new one is even better.  I cannot wait for this!! “The only good human…!!”  I can’t wait for July 11th!! I’m also really loving this peek at Christopher Nolan’s Interste

This is fantastic: The Seinfeld reunion episode from Curb Your Enthusiasm season #7, edited together.  Enjoy! This is a great site that lists the various actors and actresses who played multiple characters in different Bond films.  Great fun for the Bond fans out there! Speaking of

The Complete Indiana Jones Adventures Back on the Big Screen: The Temple of Doom!

Josh Enjoys The Complete Indiana Jones Adventures, Back on the Big Screen!

I had a tremendous time this past weekend enjoying The Complete Indiana Jones Adventures, back on the big screen!  One of my local movie theatres was participating in the national event, screening all four Indiana Jones films back-to-back-t0-back-to-back: Raiders of the Lost Ark (ple

I have had to reevaluate my opinion of Adam Carolla after listening to his marvelous interview (well-over an hour long) with the great Albert Brooks.  This is a MUST-LISTEN, friends. Attorney General Eric Holder has challenged David Simon to produce a sixth season of The Wire??  Tha

The casting announcements have been coming fast and furious for the new Spider-Man film, but I just can’t muster up much excitement.  I simply think it’s a terrible idea to re-boot the Spider-Man franchise, which felt to me like it still had a ton of gas in the tank (desp

One of my earliest posts for this blog last year was a list of a bunch of DVDs on my “to-watch” shelf that I hoped to get to some time in the near future.  One item on that list was the first set of DVDs collecting The Adventures of Young Indiana Jones. Well, it took [&he