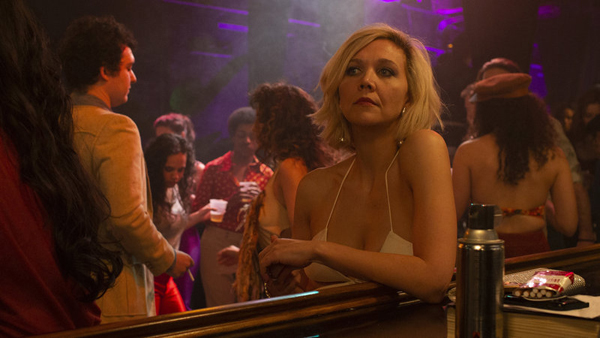 Because (or perhaps despite) The Wire ruining television for me forever (because nothing will ever be as good), I am a forever fan of writer and showrunner David Simon, and I will follow him to whatever projects he undertakes.  I have never once regretted it.  The Deuce, which Mr. Simon created along with George Pelecanos (a crime-writer who wrote many episodes of The Wire and Treme), is his latest masterpiece.

It’s an unlikely subject for a great TV show: the lives of sex workers and the growth of the pornography business in the seventies and eighties.  That sounds naughty and more than a little unpleasant.  But I should never have doubted.  Mr. Simon and Mr. Pelecanos, and their extraordinary team of collaborators, have brought all of their craft to bear on telling this story.  The Deuce is one of my favorite shows on TV these days.  I loved season one, and I thought season two was equally compelling.

I wouldn’t have thought I’d be at all interested in a show about porn, but I am obsessed with it because these characters are all so wonderful.  I can’t believe how large the ensemble is on The Deuce!  And, even more than that, I can’t believe how many characters are so important to the show.  On The Wire, “all the pieces mattered.”  Mr. Simon and Mr. pelicans and their collaborators continue to follow that philosophy, but on Treme and now here on The Deuce, that has subtly transformed from a statement about plot to one about character.  Every one of the show’s humongous array of characters matters to the story being told.  I love this approach.

There is a lot of plot on The Deuce.  Each episode is jam-packed with incident.  But this is not a show about plot, it’s a show about character.  While I just wrote that each episode is jam-packed with plot, I know some people might think that not much happens on the show.  That’s because the show tends to avoid big dramatic plot twists of the type that you see on most dramas on TV.  The plot twists are small by TV standards, but in terms of the lives of these characters who we’re following, they are enormous and earth-shattering.

(Example: all season long I was tense, waiting for the mobsters involved in so many of these characters’ lives to wreak havoc.  Would they take vengeance on Frankie for his stealing huge piles of dough from the peep-show joint he was supposed to be running?  Or on Paul, for attempting to start his own club out from under their thumb?  Or on Harvey (or Frankie, again) for selling more percentages of the porn movie Red Hot than actually existed?  But none of that wound up happening!  There are a couple of mob-related deaths in the season, but to unknown or very minor characters.  (R.I.P. talkative, lush driver Carlos.)  But while the show avoids big dramatic cliffhangers, look at how Vinnie’s inability to get out from under the mobsters’ influence, likable though Rudy and Tommy might be, slowly erodes his life as the season progresses.  The final shot of the season, in which we see a despairing, lonely Vinnie at the center of his club while everyone else in his packed place dance the night away, is heartbreaking.  This is realistic, human-scale storytelling at its most potent.  It’s critical to why The Deuce, like all of David Simon’s shows, works so well.

Then there is James Franco, who plays the dual role of brothers Frankie and Vinnie.  Mr. Franco is controversial these days due to recent allegations against him (click here for more details).  But, wow, he is extraordinary on this show.  This is the best work of his career.  Both Vinnie and Frankie are wonderfully realized, complex characters.  They are also incredibly distinct from one another, which is an extraordinary display of Mr. Franco’s talent.  (Even more so when you realize that Mr. Franco had to film every single scene that features both brothers twice, performing against stand-ins.). This season gave the Martino brothers very different haircuts, but that wasn’t necessary.  Mr. Franco does beautiful work making Vinnie and Frankie into completely separate, individual characters.  He’s well-supported by the show’s incredible writing.  Both Frankie and Vinnie are very funny and charismatic, lovable guys who are nevertheless both very flawed, each in their own very different ways.

Every single cast-member on this show deserves a paragraph written about them.  I fear that if I did that, this review would be insanely overlong.  But as you can see, I had a hard time stopping myself.  Let’s dig in.

Gary Carr’s pimp C.C. was an immediate stand-out in season one, with his incredible personal magnetism and ferocious, coiled danger.  Mr. Carr continues to impress all the way through here in season two.  (The way his story wrapped up was a huge shock to me!)  The new stand-out here in season two was Gbenga Akinnagbe as Larry Brown, who got some juicy stories here as he dipped his toes into porn acting.  Mr. Akinnagbe was hugely magnetic and likable as Larry.  The show allowed Larry to get some of the biggest laughs of the year, while also keeping him a potential danger.  His final scene in the finale with Darlene was tense.  I loved the surprising way that scene went, allowing Larry to demonstrate growth and humanity that we might have doubted he was capable of.  Method Man was mostly sidelined as Rodney this year, though he got some big stuff to do in the finale.  He was great as always.

This season saw some prostitutes content in their life, while others began to look for ways out.  Dominique Fishback was terrific as Darlene, who finds a way to go to school and to get a real job in a clothing store, while still being one of Larry’s prostitutes.  Darlene has grown into one of the most brave and courageous characters on the show, a far cry from the woman who refused Abby’s offers of help back in season one.  Emily Meade also really stepped into focus this season as Lori, who attains great success in the porn movie world even as she finally begins to crack under C.C.’s psychological abuse.  Jamie Neumann’s Dorothy/Ashley became one of the most heartbreaking characters on the show this year.  She’d miraculously escaped the Deuce at the end of season one, but she returned this year as a new woman, devoted to helping the other women selling their bodies on the street. But her damage ran deep.  Also heartbreaking was Kim Director as Shay, a prostitute who gets clean but who then falls back into drug addiction by the end of the year.

Chris Bauer was memorable on The Wire as Frank Sobotka in season two, and he’s equally impressive here as Bobby Dwyer, Vincent and Frankie’s brother-in-law, who has become corrupted and mostly destroyed his family by his work running a parlor in the Deuce.  Chris Coy, meanwhile, was fantastic on Treme, and I love how much attention he’s gotten here as Paul.  It’s great to see such a prominent homosexual character on the show, and I am pleased that the show doesn’t shy away from showing graphic male nudity in addition to all of the naked female bodies we see.

Lawrence Gilliard Jr. plays Chris Alston, a likable and honest NYPD officer who we have seen rise through the ranks from patrolman to detective.  I wish he’d had a bit more of interest to do this season.  Same goes for Margarita Levieva as Abby, who actually has plenty of plot this season as we follow her plunge into activism, though I wish we’d gotten a little deeper into her character and better understood what she is or isn’t feeling towards Vinnie these days.  (I rolled my eyes at the idea that after all these years she didn’t know that Vinnie was in the parlors… and was relieved when she later admitted that she had always known.)

I’m just warming up, there are so many interesting characters on this show, each played by wonderful actors!  There’s also:

* Don Harvey as Alston’s partner Danny Flanagan, who spends much of the season on a downward spiral.

* Mustafa Shakir as Big Mike, earnest and very funny in every scene.

* Thaddeus Street as Black Frankie, who was involved in two of my favorite moments this season.  He’s actually not present for the first, in which Rudy is shocked when Big Mike says he plans on taking along the unreliable Frankie on a heist, at which point Mile quickly clarifies that he meant Black Frankie.  Then there is Black Frankie’s hilarious reaction to a big death at the end of episode eight: “you murdered the shit out of that motherfucker!”  I want that on a t-shirt (though I’d be too embarrassed to ever wear it).

* Genevieve Hudson-Price got some great moments as Harvey’s wife Jocelyn; I loved seeing her get to successfully dip her toes into writing, working with Eileen.  (I also liked the understated moment late in the season when we saw her doing coke in the bathroom with Lori.  Jocelyn seems like a smart, together woman, but even she isn’t perfect.  No one on this show is.)

* I was pleased that Anwan Glover was back as cafe-owner Leon, despite having been sent to prison in season one.  His line to Frankie that “pie aint gonna help you, man,” when Vinnie was trying to break the news to his wife that she’d been fired from Red Hot, was a highlight of the season.

* Ralph Macchio didnt have much to do in season one as corrupt police officer Haddix, but he had some great moments in season two, most notably that final drunken confrontation with Rodney.

* I was happy to see Zoe Kazan back, briefly, as Vinnie’s ex-wife Andrea.

* I loved the new character of Roberta Colindrez as Irene, a gender nonconforming lesbian who manages the peep show that Frankie is supposed to be in charge of.  She goes from hugely sympathetic (having to deal with the unreliable Frankie, and clearly in unrequited love with Shay) to unsympathetic (as she winds up sort of trading safety for Shay with Shay’s having to be with her romantically, and not seeing how Shay is suffering in her imposed isolation) by the end of the season.  Another interesting new addition was Sebastian Arcelus as Dave, a labor activist and associate of Dorothy’s.

The Deuce season two was a nine-episode masterpiece, at once the perfect length while also being far, far too short, as I could have watched many more hours following these characters and their lives.

Bravo to David Simon and George Pelecanos and their team — who, by the way, consisted of a large number of female writers and directors this season!  Well done, and let’s see lots more of that.

Don’t let the subject matter keep you away, this is one of the finest shows on television.  I can’t wait for season three.  I hope they are able to stick the landing and bring this phenomenal series to a worthy conclusion.