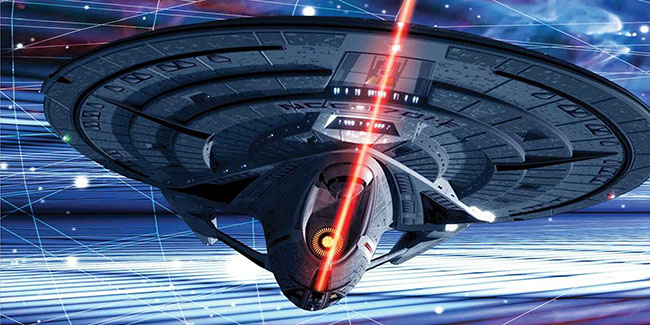 The Star Trek Literary Universe Appears to Draw to a Close with Star Trek Coda Book One: Moments Asunder 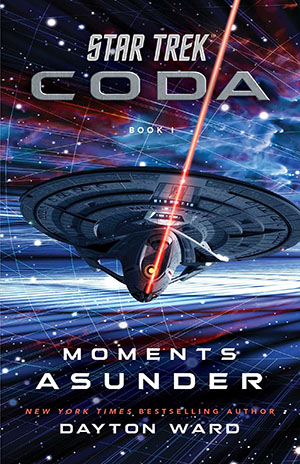 Back in 2001, I read the novel Star Trek: Avatar, by S.D. Perry, which picked up the story of Star Trek: Deep Space Nine following the events of the series finale.  I loved the book, and I was delighted to see a continuation and exploration of the DS9 story and characters beyond the events of the finale.  It was particularly cool that, right from that first book, the story wasn’t contained to just the DS9 characters, but involved Captain Picard and TNG characters as well.  Avatar turned out to be the first step in an extraordinary series of novels.  (Actually, multiple interconnected series!)  First it was a series of post-finale DS9 books.  Then there was a series of post-Nemesis TNG books and post-finale Voyager books (and even post-finale Enterprise books, set two centuries earlier), as well as a number of Original Series books that also were connected to these continuing stories.  These series of novels could be read separately, but to my delight the books wove in and out of one another, with characters crossing franchises and the books referencing one another.  This vast and ever-growing tapestry of Star Trek novels has continued for the past two decades, and has resulted in one of the greatest and most consistently entertaining sci-fi narratives I have ever come across, in any medium.  These authors (and editors) clearly have a deep, deep love for Star Trek, and it’s been incredible to see how they’ve been able to explore these characters (in many ways, far more deeply than had ben done in the canonical on-screen adventures) and push the stories forward — both the personal stories and the epic galactic stories — in a way that they couldn’t do within the framework of a TV show with its necessity of maintaining a status quo structure and a realistic budget.

For the past few years, however — ever since the Picard TV series was announced — I worried that the end of this wonderful continuing story was nigh.  Even before I’d seen a minute of Picard, it was obvious that show would contradict the events of the novel series.  In 2017, the novel series suddenly ceased publication.  I assume this was not a coincidence.  I was relieved when the books resumed in the spring of 2019 (with Dayton Ward’s TNG novel Available Light), but after only a few more books came out, it looked like David Mack’s 2020 novel Collateral Damage might be the last one we’d get.  Collateral Damage was a great book, but it didn’t feel like a true conclusion to this two decades-plus interconnected novel series.

And so I am delighted that, a year later, we’re getting the three-novel Coda series which looks like it’s been designed to provide a real ending to this long-running story.  I am so happy that the powers that be aren’t just letting this series peter out, but are working to try to craft a satisfying ending.  On the other hand, I freely admit that I don’t want to see an ending!!  I am still very sad that these novels can’t continue to tell their stories alongside other novels set in the new continuity of the new Alex Kurtzman-overseen TV shows (Picard, Discovery, etc.).  (At least, it doesn’t look like they can.  I am assuming that Coda represents the end of this long-running novel series, but I don’t actually know how this trilogy is going to end…!)

In Coda book one, Moments Asunder, by long-time Trek author Dayton Ward, Captain Picard and the crew of the Enterprise E discover that time itself appears to be under threat from an unseen enemy.  They’re assisted in their efforts by the return of Wesley Crusher, who has become a Traveller (as established in the seventh season TNG episode “Journey’s End”).  Wesley has popped up a few times before in the books, but never for very long.  That didn’t surprise me, because I imagine it must be hard for the Trek authors to find ways for this now super-powered character to have a role in the stories.  But since Coda is clearly going to be dealing with alternate timelines (with the novel series most likely about to be supplanted by the Picard continuity), it’s wonderful to have Wesley back involved in the story in such a big way.

I like that the villains of the story are revealed to have a connection to an adversary we met during TNG.  (I won’t spoil the details here.)  That alien race wasn’t well explored in TNG, so they’re ripe to be revisited.  Unfortunately, in this novel, we don’t really get to know much about them either.  Sure, we learn a lot of plot stuff about what they’re doing and the dangers that poses to the timeline(s).  But because we don’t actually get to know any characters from that alien race, they remain something of a cypher.  The result is the story is a bit unbalanced, and this enemy — which might just be the villain to defeat our Trek novel heroes where no-one and nothing else has — aren’t developed enough to suit me, to warrant their being able to accomplish such a feat and have that feel satisfying.

On the other hand, Mr. Ward has gone out of his way to give time and attention to the entire ensemble of TNG characters from this post-finale novel series, as well as characters from other series as well.  We get to spend a lot of time with familiar TNG characters such as Picard, Beverly, Geordi and Worf, as well as with the many supporting characters who have been major players in these novels: Dina Elfiki, T’Ryssa Chen, Tamala Harstad, and Taurik.  We also get to see Ezri Dax and Sam Bowers of the Aventine, as well as Department of Temporal Investigations characters such as Agents Garcia and Ranjea.  It’s also fun to see how Mr. Ward incorporates a number of elements of previous time-travel stories from across the Trek series, from the Guardian of Forever to the Typhon Expanse (from the TNG episode “Cause and Effect”) to the 29th century U.S.S. Relativity (from the Voyager episode “Relativity”).

Mr. Ward takes some big narrative swings and really embraces the idea of an ending to this saga.  This book has a surprisingly high body count of familiar characters!  That started off as shocking and cool, but I must admit my feelings turned somewhat as I approached the end of the book.  If Coda is going to be the last we ever see of the novel continuity, I don’t want these stories to end in catastrophe.  I want to imagine that the characters live happily ever after, and go on to have many more future adventures!  It sort of twists the knife in an unpleasant way to have so many characters killed off here.  Also, Mr. Ward not once but twice ends a sequence from a character’s point of view in which something bad happens and that character loses consciousness… only for me to discover pages later that character was dead.  I think there was a slight miscalculation there, in that I think the deaths would have been more impactful if it had been more clear what was happening.  Also, as the deaths start coming fast and furious in the novel’s later pages, I wish Mr. Ward had taken the time to have the characters better acknowledge what had happened.  In Christopher L. Bennett’s DTI novels, agents Garcia and Ranjea had a deep connection… and yet we don’t get even a single moment of reaction from Garcia here, after Ranjea is killed.  And oh my goodness, how do you kill off you-know-who and not show us ANY reaction from Worf???  Maybe book two will explore this, but here in this novel these felt like missed opportunities.

But still, Moments Asunder is a ripping, fast-paced yarn.  I had a blast reading it, though how I ultimately feel about this book will rest on how the story of Coda concludes.  So far, I thought this was an exciting adventure, but I’m nervous about where this is all going.  Will most of these beloved characters wind up dead?  Will this universe be erased?  (There was already talk in this book’s final pages about how the timeline in which these stories take place is unstable.  That made me antsy.)  I’m really hoping the next two books are able to stick the landing and bring these stories to a satisfying conclusion.  For now, I dug Moments Asunder and I’m counting the days until book two, The Ashes of Tomorrow, by James Swallow, arrives.

Star Trek – Unspoken Truth , Troublesome Minds, Cast No Shadow, Excelsior: Forged in Fire, Allegiance in Exile, Legacies Book 1: Captain to Captain, Legacies Book 2: Best Defense, Legacies Book 3: Purgatory’s Key, The Face of the Unknown, From History’s Shadow, Elusive Salvation, Assignment: Eternity, The Rings of Time, The Weight of Worlds, No Time Like the Past, Foul Deeds Will Rise, The Antares Maelstrom, The Shocks of Adversity, Crisis of Consciousness, The Latter Fire, Serpents in the Garden