5. Daredevil: “Cut Man” (season one, episode two, released on 4/10/15) — I really, really loved the first season of Netflix’s Daredevil show.  It was a bold announcement of the type of Marvel show that Netflix would be creating, something far darker, more complex, and more adult than almost every other super-hero TV show out there.  This, the show’s second episode, is filled with greatness.  I was particularly taken by the conclusion in this episode of the flashbacks, begun in episode one, of the death of Matt’s dad Battlin’ Jack Burdock, and the repercussions of the accident that blinded Matt but gifted him with super-normal powers.  I love this show’s depiction of the relationship between Jack (wonderfully well-played by John Patrick Hayden) and his young son Matt.  This enhances the gut-punch of the moment we all know is coming when Jack gets killed.  I like that the show takes the time to develop Jack, as his presence will continue as a shadow over Matt Murdock for the rest of the season.  I also enjoy the way this episode introduces Claire (Rosario Dawson) and begins to develop her relationship with Matt in the present day.  But the reason this episode is on this list is because of the magnificent one-take action sequence that closes the episode.  This incredible action set-piece absolutely blew me away.  In one long, slow take, the camera slowly glides down a long, dingy corridor, as Matt Murdock battles his way to rescue the young girl being help captive in the room at the end of the hall.  The sequence is a triumph of staging and stunts, as Daredevil and an array of bad-guys crash in and out of rooms, in and out of doors, sometimes in view of the camera and sometimes not, as Daredevil fights his way down that hallway.  (It’s also a triumph of sound-editing as there are times when we can’t see what’s going on in the rooms beyond the corridor, but the soundtrack tells us everything we need to know.)  This sequence was a bold announcement of the ambition of this show.  I loved it.  (Click here for my full review of Daredevil season one.)

4. Mad Men: “Person to Person (season seven, episode fourteen, aired on 5/17/15) — It is a delight when a long-running, great television show is able to A) end the show on its own terms, and B) stick the landing.  With this, the series finale of Mad Men, Matthew Weiner was able to do both.  I was hugely satisfied by where all of the main characters were left at the end of the show.  I loved seeing Roger happy with Marie, and I loved Joan’s sweet comment about Roger’s finally getting his timing right.  I loved that Joan ended the show financially secure and also happy (and hopefully successful) in business (and very cleverly using both of her last names in the name of her business, after Peggy turned down her offer of being a partner).  Peggy and Stan’s I-love-you phone call was an unusually TV-fake sort of twist for this show, but the moment was so sweet and so well-earned that I loved it nonetheless.  I loved Pete Campbell’s farewell scene with Peggy.  I was pleasantly surprised by how happy I was that Pete, who was such scumbag for so much of the run of the show, got a happy ending of his own, back together with Trudie.  And then there was Don.  Matthew Weiner’s show has always followed an unexpected narrative path, and I’m impressed that Mr. Weiner was able to continue his unique, unexpected style in the finale, spending so much time showing us Don’s experiences at the hippie retreat center, building to his hitting bottom during that phone call with Peggy.  This was not at all how I expected the finale to go (what other show would give the most important speech in its series finale to a character we’d never met before??) but it worked beautifully.  And that ending?  Absolute perfection.  (Click here for my full review of the final season and series finale of Mad Men.) 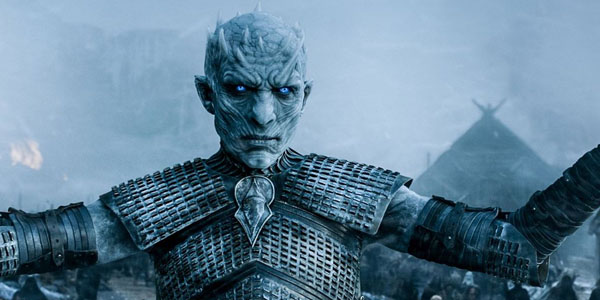 3. Game of Thrones: “Hardhome” (season five, episode eight, aired on 5/31/15) — Game of Thrones has developed a habit of making the ninth episode of each season the big action and emotional climax of the season, with the tenth episode left to picking up the pieces.  So bravo to show-runners David Benioff and D. B. Weiss for switching things up in the fifth season and catching us all off-guard with the insane I-have-never-seen-anything-like-this-before-on-TV-EVER carnage that unfolded here in episode eight.  There was a lot of great stuff to be seen in the first half of the episode, particularly the two juicy scenes between Daenerys and Tyrion.  (This pairing was my most favorite development of season five.)  We also finally get to see Cersei paid back for some of the evil she has perpetrated over the course of the series and, remarkably, the show made me feel sympathy for this woman who I had been longing to see get some payback for five long seasons.  Then we catch up with Jon Snow and his attempt to unite the Wildlings north of the Wall to fight together at his side.  I never expected that the episode would stick with Jon for its entire second half, but that’s exactly what happens as the situation north of the Wall quickly devolves from bad to worse to spectacularly cataclysmically bad.  The White Walkers (who have been a looming but seldom-seen threat in the show ever since the very first scene of the premiere episode) attack the Wildlings’ camp and proceed to slaughter everyone, and we’re introduced to the fearsome leader of the White Walkers (pictured above).  This extended combat sequence was magnificent, a movie-quality action spectacle the likes of which I truly have never seen on television before.  This was fantasy action-carnage on an unparalleled scale, and the CGI chaos was wonderfully well-woven with gripping moments for characters we were rooting for such as Jon Snow and even the newly-introduced Wildling woman Karsi.  I could barely breathe watching the second half of this episode unfold, and when it finally drew to a close, with Jon’s having barely escaped with his life while the White Walker leader smugly raises his arms in triumph, re-animating all of the newly-killed Wildlings (and Nights Watchmen) into a vast undead army at his command, I felt Game of Thrones had entered a whole new level of its story-telling.  Magnificent.  (Click here for my full review of Game of Thrones season five.)

2. Parks and Recreation: “One Last Ride” (season seven, episode twelve, aired on 2/24/15) — The show I was saddest to see end this year was the wonderful, brilliant, hilarious, sweet Parks and Recreation.  I feel blessed that this little-seen and under-appreciated show actually lasted seven seasons.  That’s a miracle — and that the show was still so great in its seventh and final season was an extra miracle.  This series finale was everything I loved about this little show: it was as zany and filled with fast-paced zingers as the show always had been, while also taking the time to allow us to say goodbye to these wonderfully unique, beloved characters.  In the finale, Leslie and the Parks & Rec gang enjoy “one last ride” on their final day at work together in Pawnee, fixing some guy’s broken swing, while the show flashes forwards and backwards in time to show us the future of all the main characters.  It’s all note-perfect from start-to-finish, with every character getting a moment in the spotlight.  We learn of Donna’s past getting kicked out of En Vogue (“technically I kicked them out”) and see her future as a wealthy real estate saleswoman (“from this window you can watch them build the new space-haystack around the space-needle”), continuing her “Treat Yo’Self” tradition by treating her teacher husband (Keegan-Michael Key) to an education fund to help his school.  We see April delivering her and Andy’s baby in full Halloween make-up while listening to her “Monster Mash” birth-mix.  (How great is Leslie’s sigh of relief when she learns that April and Andy have given their son the normal name of Jack!!)  We see Tom’s fame after writing “Failure: An American Success Story.”  (“Do not be Jerry!”)  We see Jerry Gergich as multi-term mayor of Pawnee, even at age 100 surrounded by his ageless beautiful blonde wife and daughters.  (I love that they spelled his name wrong on his tombstone!!)  Even the minor characters get love.  Jean-Ralphio gets some great moments with several new scams (from pretending he’s in a wheelchair — “a terminal case of get me to the front of the line at Six Flags!” — to faking his own death with his sister Mona-Lisa as his accomplice) and declaring his love for Leslie.  (Leslie: “I know.”)  We see that Craig and Typhoon got married (with Ron as the best man), we see Ethel Beaver, we see Perd, we see Dr. Saperstein (Henry Winkler), we even see Shauna Malwae-Tweep again (Leslie: “How’s this for a headline: Still Swingin’! Parks gang reunites for one last bang!”  Shauna: “That’s a little dirty.”).  Ann and Chris return (and Chris gets in several final “literally”s for the road).  But the highlights of the episode for me were the richly emotional climaxes we were given to the relationships between Leslie and Ron, and Leslie and Ben.  From Ron’s declaration to Leslie that they were “workplace proximity acquaintances” to his note-perfect deadpan speech to his new park rangers to the quiet moment of the two of them quietly holding hands on the swingset, it was all perfect.  And I loved that Leslie herself was given a happy ending, both personally and professionally.  I loved seeing Ben give up the idea of his being Governor of Indiana so that Leslie could do so (“somebody’s been reading my kindergarten dream journal!”).  It was such a sweet, romantic gesture, and the quiet look of love Leslie gives Ben in that moment is beautiful.  (Followed by Amy Poehler’s magnificent delivery of the line praising Ben’s super-genius qualities and his “tight, compact little body.”)  The whole episode winds up with a wonderfully emotional clip montage while Leslie gives a speech emphasizing the importance of public service.  The gang assembles for one last pic, every character gets a great final line, and then boom, it’s over.  For those of you reading this who have never seen Parks and Rec, Treat Yo’Self and dive in.  (Skip the six-episode first season and start with the season two premiere, in which Leslie sets off a media firestorm by accidentally officiating the marriage of two male penguins at the Pawnee Zoo.)  (Click here for my full review of the series finale of Parks and Recreation.)

1. The Daily Show with Jon Stewart — I always knew that some day Jon Stewart would leave The Daily Show, but I’d hoped that would be many more years in the future.  But, alas, this year Jon Stewart said farewell, bringing to an end his fiercely entertaining, brilliantly incisive show.  Ever since I started writing these Best Episodes of TV lists, I’ve been cheating with my number one spot by praising the entire year of Daily Show episodes as a whole, rather than picking one single episode.  Next year I won’t have that option but for now, for one final time, let’s look back at some highlights from Jon Stewart’s final year at the helm of The Daily Show.  Farewell, Mr. Stewart.  To say that your voice will be missed is an understatement of epic proportions.