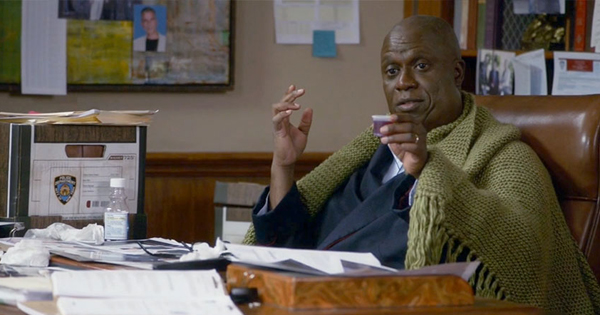 Let’s continue my look back at The Top Twenty Episodes of TV in 2016!  Last week I presented part one of my list, with numbers twenty through sixteen.  Onward!

15. Brooklyn 99: “9 Days” (season three, episode twelve, aired on 1/19/16) – Jake Peralta (Andy Samberg) and Captain Holt (Andre Braugher) get the mumps and are quarantined together for nine days.  “9 Days” has one of the most ridiculous premises of any episode of Brooklyn 99, and yet, somehow, it also manages to be one of the funniest.  The Peralta-Holt pairing has always been comedy gold for the show, and this episode really lets Mr. Samberg and Mr. Braugher go at it, assisted by some comically over-the-top make-up effects to depict their mumps-swollen faces.  Gems in this episode include watching the two men discuss their testicular pain, hearing Holt yell “CASE” as Jake tumbles to the ground, and this exchange: Amy: “I’m immune to stuff you haven’t even heard of.”  Holt: “But not immune to braggadocio.”  I enjoyed seeing The Office’s Oscar Nuñez pop up as the doctor who gives Jake & Holt their diagnosis, and I loved Boyle’s description of Rosa as having a “motorcycle helmet for a heart,” as well as his advice on grief: “Real men don’t cry for more than three days.”  And let’s not forget Gina’s comment that: “C-minus is the perfect grade. You pass, but you’re still hot.”  Also: the name of Amy’s trivia team is “Trivia Newton-John”?!  Genius! 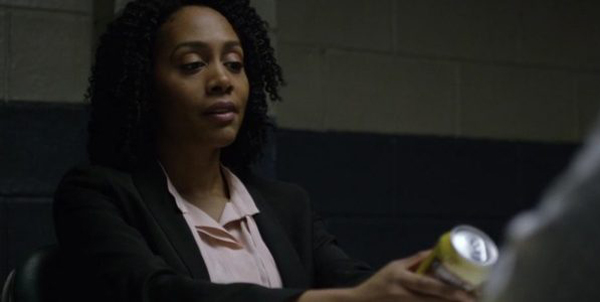 14. Luke Cage: “DWYCK” (season one, episode nine, released on 9/30/16) – This episode, late in the run of the first season of Luke Cage, came at a time in which the Netflix show seemed to be spinning its wheels, stretching time to fill out the 13 episode run by having Luke (Mike Colter) and Claire (Rosario Dawson) inexplicably leave town while the bad guys wreak havoc in order to track down the doc who had a hand in Luke’s super-hero origin.  While I didn’t have much patience for that story development, it allowed room for this episode’s welcome and wonderful spotlight on Misty Knight (Simone Missick), the NYPD officer who has been Luke’s friend and also his most dogged enemy.  I have always loved the character of Misty from the comic books, and I never thought we’d ever get to see this wonderful character appear on-screen, let alone as perfectly realized as she was on this show.  Ms. Missick was a revelation, phenomenal at bringing this strong, honest African-American woman to life.  This episode begins with Misty on suspension, having lost her cool when Claire was in police custody.  Over the course of the episode, we follow Misty’s grilling by a police-assigned therapist, and learn about the path that led to her joining the NYPD.  It’s a wonderful character-study and a gripping spotlight on this fascinating female character.  (Click here for my full review of Luke Cage season one.) 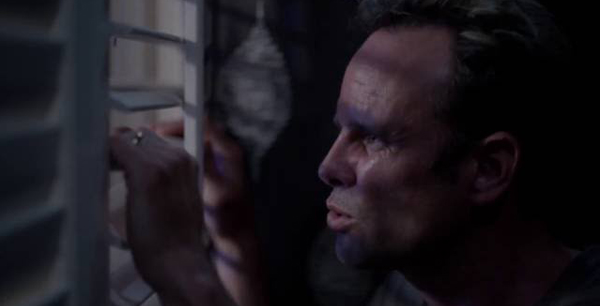 13. Vice Principals: “Circles” (season one, episode five, aired on 8/14/16) – Vice Principals follows Neal Gamby (Danny McBride) and Walton Goggins (Lee Russell), the two Vice-Principals of North Jackson High School, each of whom thinks that he should be the Principal, rather than the woman, Dr. Belinda Brown (Kimberly Hebert Gregory), who actually holds that position.  I came to Vice Principals because I will follow Danny McBride almost anywhere, and while Mr. McBride is spectacular as always, it turns out that Vice Principals truly belongs to Walton Goggins and his masterful, hilarious, gripping portrayal of the brittle, venal Lee Goggins.  This episode shines a welcome spotlight on Lee, showing us more of his life outside of the High School.  While Lee is confident and in charge at school, at home is is constantly hectored by his mother-in-law and, in this episode, humiliated by the buff, gruff neighbor next door.  And thus we are given a deeper understanding of Lee’s combustive mix of insecurity and anger.  Meanwhile, Gamby’s main story this episode is also a winner.  When Dr. Brown takes issue with the harsh punishments Mr. Gamby doles out for student transgressions at school, she directs Gamby to instead create “the circle,” a safe-space where he and the kids can sit on the floor and eat popcorn and talk about their feeling.  The stiff-necked Gamby feels out-of-place in such a setting at first (leading to a few moments of very-funny comedy), but eventually we see him giving a tearful monologue to the kids in the circle.  The end of the episode, in which Gamby stands up for Lee and punches Lee’s neighbor, solidifies the bond between these two men, and was for me a high-point of the season.  This episode was Vice Principals at its best, giving us fascinating insights into its main characters while continuing to be painfully awkward and hilariously funny.  (Click here for my full review of Vice Principals season one.) 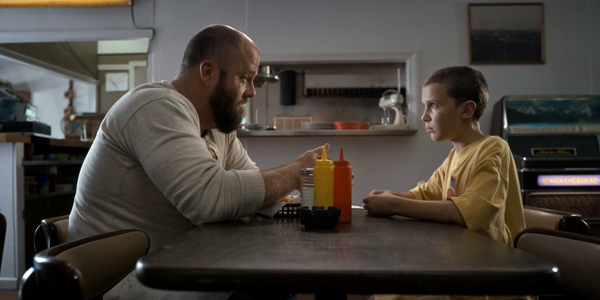 12. Stranger Things: “Chapter One: The Vanishing of Will Byers” (season one, episode one, released on 7/15/16) – This initial installment was an engaging beginning to Stranger Things, a lovely statement of intent for the series.  I love the “chapter one” title, and that along with the specific font of the Stranger Things title card draws our attention to the way the show will channel the novels of Stephen King, just as the tone of the visuals and the focus on a group of kids trying to figure out a paranormal event happening around them homages the work of Steven Spielberg and 1980’s Amblin Entertainment, along with Richard Donner’s The Goonies.  This first episode also shows us that Stranger Things is more than simply a nostalgic look back at the things we all loved a few decades ago — it’s an interesting story all on its own.  In “Chapter One,” we meet Will Byers and his D&D-playing friends.  I love that the kids in Stranger Things actually look and act like kids (not older actors pretending to be kids).  Right away, this episode sets up all of these kids and their individual characteristics, establishing them as distinct individuals.  I love this episode’s introduction to Sheriff Hopper (David Harbour); in that first sequence it almost seems like Sheriff Hopper will be a villain, and not the heart-and-soul of the show as he ends up becoming.  Wynona Ryder also makes an impression right away, as Will Byers’ frantic mother, looking for her son.  “Ninety-nine out of a hundred times, a kid goes missing, the kid is with a parent or relative,” Chief Hopper tells Joyce Byers (Winona Ryder).  “What about the other time?” she asks.  And thus the story begins.  (Click here for my full review of Stranger Things season one.) 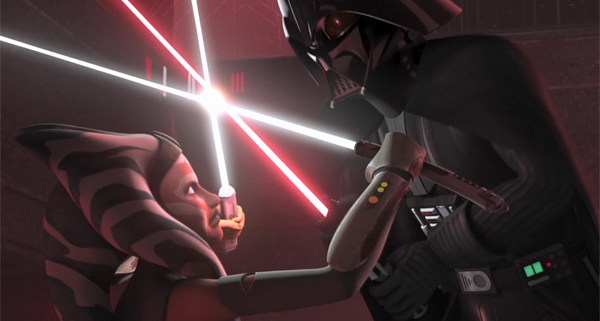 11. Star Wars Rebels: “Twilight of the Apprentice” (season two, episodes 21-22, aired on 3/30/16) – After having spent two seasons being hounded by the Empire’s force-wielding inquisitors, Kanan and budding Jedi Ezra leave their friends in the rebellion and go off with Ahsoka Tano to confront their pursuers.  They wind up confronting not only three vicious inquisitors, but also Darth Maul — still alive after all these years! — and, eventually, Darth Vader himself.  This episode is filled with gorgeous animation, thrilling lightsaber battles, and deep connections with the entire tapestry of the Star Wars saga.  I was delighted to see show-runner Dave Filoni resurrect, for a second time, Darth Maul.  This was a great character totally wasted by Episode I, so I was glad that Mr. Filoni and his team brought back the character for several appearances in The Clone Wars, showing us how Maul had survived getting sliced in half by Obi-Wan, and how this vengeful force-wielder could still cause a lot of trouble for the Jedi.  Maul’s story was sadly never completed because of The Clone Wars’ early cancellation, so I was thrilled to see Maul brought back here.  But this episode belongs to former Jedi padawan Ahsoka Tano and her long-in-the-waiting confrontation with her former master, Darth Vader.  Ahsoka was introduced in the very first episode of the animated Clone Wars show, as a new padawan assigned to Anakin Skywalker.  Of course, this immediately begged the question: what happened to Ahsoka following the Jedi Purge and Anakin’s transformation into Darth Vader?  We never saw her in the Original Trilogy.  Did Anakin kill her?  Could she have somehow survived?  Star Wars fans assumed that eventually those questions would be answered by the concluding episodes of the Clone Wars series, but when Clone Wars was cancelled after Disney bought Lucasfilm, it seemed that we might never get these answers.  Praised be Filoni and his team who brought Ahsoka back into the Star Wars story with her appearances on Rebels, depicting her as a key figure in the early days of the Rebellion.  As much fun as it was seeing Ahsoka again, I was truly bowled over by the brilliant use of Darth Vader on Rebels, giving us the top-of-his-game, brutally cruel and evil Vader that we hadn’t truly seen since 1980’s The Empire Strikes Back.  And voiced once again by James Earl Jones, no less!!!  When Ezra attempts to stand up to Vader, telling Vader that he’s not afraid to fight him, Vader replies (with a magnificent delivery by James Earl Jones): “Then you will die braver then most.”  Is that not classic Vader??  This episode, the season two finale, climaxes in Ahsoka’s emotional lightsaber duel with Vader, the creature that was once her friend and mentor, and Ahsoka’s heartbreaking declaration that she won’t abandon her former master a second time (a powerful moment enhanced when James Earl Jones’ Vader voice is briefly replaced by that of Anakin’s, played by the same voice-actor who played Anakin in The Clone Wars).  If the ending had been a little less ambiguous, this episode would be even higher on my list.  As it was, it was a pretty spectacular episode of television and a critical piece of the larger Star Wars story.  (Click here for my full review of “Twilight of the Apprentice.”)

Please join me back here on Wednesday for part three of my list, numbers ten through six!