Skip to the content
HomeWritten PostChecking into the Overlook Hotel: Josh Looks Back at The Shining 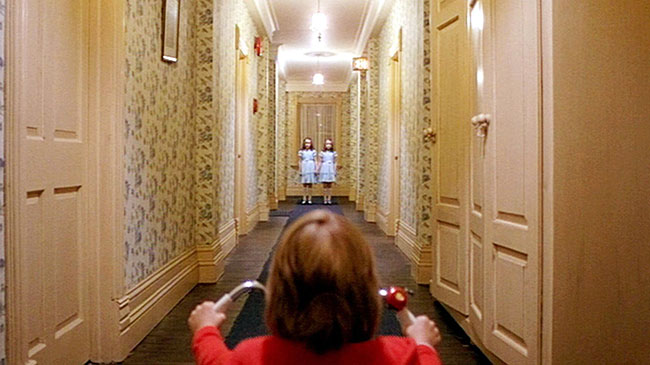 Checking into the Overlook Hotel: Josh Looks Back at The Shining

The recent release of the film adaptation of Doctor Sleep (which I thought was great!!  My full review is coming soon!!). the sequel to The Shining, made me feel like it was time to look back at The Shining.  And so I started with Stephen King’s novel, which I’d never before read!  I’m a huge Stephen King fan, but somehow I’d never read this, one of his most well-known novels.  And so last month I decided to remedy that, reading the novel before then rewatching Stanley Kubrick’s famous film adaptation from 1980.

I was not at all surprised to find that I loved Mr. King’s novel.  It’s interesting: while I have read many of Mr. King’s Books, The Shining feels to me like the most “Stephen King” novel of all the Stephen King novels I have ever read.  By that I mean that The Shining seems to be a perfect combination of all of the characteristics I’d most expect from a Stephen King novel: a gripping character story that involves horror both from a human source and with a supernatural bent.

I’ve seen Stanley Kubrick’s film several times, so I was decently familiar with the broad strokes of the story.  (Equally as memorable: The Simpsons’ brilliant parody in Treehouse of Horror V, from 1994.  But that’s a whole ‘nother blog post…)  And yet, when reading the book, I was as gripped by the story as if I was completely unfamiliar with it.  Mr. King’s writing is so propulsive.  It grips the reader right in the guts and pulls you right along.  The Shining is a very internal novel, with a great deal of time spent inside the heads of the main characters Danny, Jack, and Wendy.  And yet it’s never slow or boring.  One of my favorite aspects of Stephen King’s writing is how folksy it is, how conversational, how easily it engages with the reader.  Reading a Stephen King novel, I always feel as if Mr. King is right in front of me, telling me the story, spinning me the yarn.  His writing doesn’t have the formality or distance that prose from a lesser hand might sometimes have.

After finishing the novel, I rewatched the film.  It was great fun to see where the film followed the novel faithfully, and where it diverged.

There’s no question that Stanley Kubrick’s film is a masterpiece.  Right from the opening, in which we follow those magnificent, long tracking shots as the camera glides over the water, eventually finding the Torrence’s lone car as it travels along a windy road, while the camera follows from overhead, the film announces itself as something special, something important, something different and unexpected.  Those long tracking shots must have been fiendishly difficult to create, but they’re so beautiful and so surprising as a way to open the film.  The shots are a technical marvel, but more importantly they create the perfect sense of unease and mystery, as we’re forced to wonder what is happening and where these long shots, and this film, are taking us.  And that score!!  Amazing!!  The music is so ominous and so creepy and so memorable.  Just like I felt when reading the novel, the film grabbed me and pulled me along right into the story.

I feel about Mr. Kubrick’s film similar to how I feel about Tim Burton’s 1989 Batman film.  That’s a strange connection to draw, I know!  But hear me out.  I think Tim Burton’s Batman is a fantastic film… and, at the same time, I don’t think it’s a great adaptation of Batman for the screen.  There’s much that the film gets right about Batman: I love the seriousness with which the film takes the character, I love the exploration of Bruce Wayne’s twisted psyche, I love the look of the Batman costume and the Batcave and the Batmobile, I love the oppressive architectural menace of Gotham City itself, and lots more.  At the same time, there’s so much that the film gets wrong: allowing Batman to kill, making the Joker the man who killed Bruce Wayne’s parents, the casualness with which Alfred reveals Batman’s identity to Vicki Vale, and other problems.  Similarly, I think The Shining is a masterpiece of a film, and while there is much that the film gets exactly right in adapting The Shining, there are many aspects of the book on which it misses the mark, most notably the film’s treatment of the three main characters of the book: Jack, Danny, and Wendy Torrance.  But that doesn’t mean The Shining isn’t a great film!!  Just that it’s an imperfect adaptation of the novel.  Let’s dig in…

The best place to start is with Jack Nicholson as Jack Torrance.  There’s no question that Jack Nicholson is an amazing actor, and his performance as the unhinged and eventually murderous Jack Torrance is scary and very memorable.  There are scenes in the latter half of this film that show Mr. Nicholson at the top of his game.  He is terrifying!!  The problem is that there’s no arc to Jack Torrance’s character in the film (a flaw that Stephen King has repeatedly pointed out in interviews).  You know something is off about Jack from the second you first see him on screen.  So his descent into insanity isn’t much of a descent at all, and certainly not much of a surprise.

Young Danny Lloyd does a solid job as Danny Torrance (did they cast the Torrance family by just finding actors with the same first names??), but while his work as the kid is very creepy, the film misses a lot of the depth of his story and his possibly paranormal connection to “Tony.”  The finger-wagging thing in the film simplifies Tony too much for my tastes; I preferred the more complicated, psychological aspect of the novel’s Tony, and what that said about Danny Torrance himself.  (Danny is also out of it for most of the climax of the movie, while he was a far more active participant in the story of the novel.  I assume those changes were driven by the limitations of what the filmmakers felt that Danny Lloyd, or any child actor, could actually accomplish?)

Like Jack Nicholson, Shelley Duvall’s performance as Wendy Torrance is very memorable.  And yet I felt Wendy’s character was far too minimized in the film.  She’s significantly more of a presence in the book.  The novel takes the time to develop her as a strong and interesting character.  In the film, I felt she was far too weepy and passive.  There are lots of stories about how Stanley Kubrick bullied Ms. Duvall into being so frantic in her performance.  (Those stories make me very uncomfortable, by the way.)  While Ms. Duvall’s on-screen hysteria is striking and unnerving, I prefer the tougher, smarter Wendy of the novel.

Let’s dig into other differences and similarities between the novel and the film.

* I loved the character of Dick Halloran in the novel… and I love Scatman Crothers’ performance as Dick in the film!  I just wish Mr. Crothers had more than that one great scene early in the film.  I liked that he’s more of a presence in the book… and I was much more satisfied by the happier ending that Mr. King gave to him in the novel!

* Watching the film, I miss the hedge animals (that come to life to menace Danny & co.) in the book.  But of course I understand why they’re not in the film — depicting them would have been impossible with 1980’s technology.  The film’s memorable hedge maze is a fine substitute.

* The blood coming out of the elevator is one of the film’s most famous images… so I was quite surprised to discover that image is not in the book!  That’s a wonderful invention for the film.

* Also not in the book: the iconic “All work and no play makes Jack a dull boy” line on Jack’s typewriter!  Wow!!  That’s a brilliant invention by Mr. Kubrick and co.  When reading the book, I was shocked to discover that wasn’t in there!

* I adore the movie’s long tracking shots, following Danny rolling on his small bike around the hotel.  I love how the sound cuts in and out as Danny switches from floor tiles to carpet and back again.  That is so unique and memorable!  (The blu-ray’s special features contain the revelation that this shift in sound was a happy accident they discovered on set.  Amazing)

* The throw-away line in the film about how the Overlook was build on top of an Indian Burial Ground is silly and obvious.  Ugh, I hate that line.

* The set design in the film is extraordinary.  Every aspect of the Overlook’s exterior and interior are so perfect and well-designed.  There are so many unique and extremely memorable locations within the Overlook!  The huge, windowed, high-ceilinged lobby in which Jack does his writing.  The kitchen with its bright, shiny metal surfaces.  The gold ballroom and bar.  The room off the bar filled with bright red (in which Grady tells Jack that he must “correct” his wife and son).  The lime-green bathroom of room 237 (in which Danny and later Jack encounter a nude ghost).  The Torrence’s living quarters, and the bathroom in which Wendy takes shelter from an axe-wielding Jack.  The hedge maze.  All of these locations, and so many more, are all beautiful and absolutely perfect.  These are great examples of Mr. Kubrick’s incredible eye, and the extraordinary work done by his team.