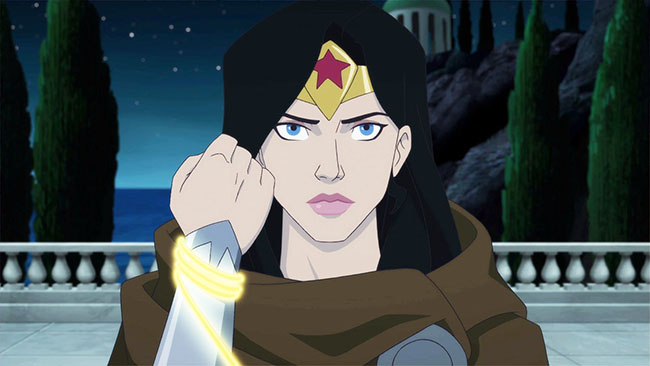 Wonder Woman: Bloodlines is the latest direct-to-DVD/blu-ray DC animated film.  Set in the “New 52”-style continuity begun with 2014’s Justice League: War, this film is a welcome focus on Wonder Woman.  We begin with a retelling of her origin, and her departure from Themyscira with Steve Trevor.  After returning with Steve and his friend Etta Candy to Washington, DC, Diana goes to live with a professor, Dr. Julia Kapatelis, who specializes in ancient cultures.  Dr. Kapatelis’ daughter, Vanessa, grows jealous of the perfect Diana, believing that she can never equal Diana in her mother’s eyes.  Years later, Vanessa grows to blame Diana for her mother’s death, and she takes up with a group of super-villains who are plotting to locate and destroy Themyscira.

It’s great to see Wonder Woman headline one of these animated films.  Back when this animated film series began, a solo Wonder Woman film was one of the earliest projects made.  I quite liked that 2009 solo film; I’d have loved to have seen follow-up adventures with that spectacular voice cast (Keri Russell as Diana and Nathan Fillion as Steve Trevor).  In the past decade, I don’t think we’ve gotten any additional DC animated films with a female character in the lead role.  While this version of Wonder Woman (voiced by Rosario Dawson) has appeared in many of the films in this “New 52” animated continuity, it’s nice to see her given the spotlight here in Bloodlines.

This film is solid though not spectacular.  It’s a fun adventure with some interesting emotional stakes, as we follow Diana and Vanessa’s fraught sisterly relationship.  I like the idea of making that relationship the focal point for the story.

There are two main problems.  The first is that I think the film tries to do way too much in its short (fewer than ninety minutes) run-time.  Not only do we get appearances from many of Wonder Woman’s rogues gallery (Cheeta and Giganta and Dr. Poison and Dr. Cyber and more), we also get a retelling of Wonder Woman’s origin before the main adventure begins.  That was a head-scratching decision for me.  Those opening ten minutes are a perfectly fine, entertaining cliff’s notes version of Wonder Woman’s first encounter with Steve Trevor and her decision to leave Themyscira.  But why did we need it?  No only have we gotten to see this origin in prior animated films, we also saw in in the 2017 live-action Wonder Woman film.  Is there anyone watching this film who doesn’t know Wonder Woman’s origin?  Clearly the filmmakers were worried there would be.  Their aim with this film seems to have been to create a definitive Wonder Woman story, complete with her origin and many of her most famous adversaries.  But I think that winds up squeezing this film’s actual original story — Diana and Vanessa’s relationship and Vanessa’s turn to evil — too much.

The second problem is the same issue that, in my opinion, has beset many of these recent DC animated films.  They’re filled with adult content, but the stories themselves aren’t sophisticated enough to truly grab an adult audience.  The beats of Diana and Vanessa’s relationship are sketched out in very simplistic vignettes, which feels more appropriate for a film aimed at younger audiences.  But this film’s blood-soaked climax feels too much for younger viewers.  Then there’s the moment in which we see Vanessa preparing for her transformation into a super-villain — and we see her naked from behind.  This isn’t an appropriate moment in a film intended for younger viewers.  It’s further complicated by the fact that the Vanessa character is a young woman!  I’m not sure how young she’s supposed to be — the character does have a full-time job, so she’s not a little kid — but she’s for sure portrayed as more of a “girl” in contrast to Wonder “woman.”  It’s just creepy for the audience to be oogling her naked butt from behind.  This feels like one more example of the filmmakers behind these animated films not quite having a bead on who their audience is and what tone they should be striving for.  As I have written before, I am all for animated superhero films (or animated films on any subject) that are intended for an adult audience.  But in addition to adult content, that would also demand a story of complexity and nuance greater than what is to be found in Bloodlines or any of these other recent DC animated films.

But I don’t want to get too negative.  For what it is, there’s plenty to enjoy in Wonder Woman: Bloodlines!

The voice cast is strong.  I’ve enjoyed Rosario Dawson as Diana/Wonder Woman in all of these recent animated films, and it’s fun to see her have a chance to shine here.  She’s able to embody Diana’s heroism and bravery, and also her kindness.  It’s hard for anyone to compete with Nathan Fillion, but Jeffrey Donovan does a solid job as Steve Trevor.  I like this Steve.  He has a lightness but he’s not a total goof — he’s believable as a capable soldier.  Marie Avgeropoulos is solid as Vanessa, as is Nia Vardalos (My Big Fat Greek Wedding) as Dr. Julia Kapatelis.  I really enjoyed the work of Adrienne C. Moore (Orange is the New Black) as Etta Candy.  I really loved Etta in this film!  I loved her character design; I loved that she was funny but still depicted as smart and capable; and I loved that the film doesn’t shy away from presenting her as a lesbian.  (I loved seeing her with an Amazon on each arm at the end of the film; and her earlier statement about hoping for “an Amazon who likes ’em thick” really raised my eyebrows — in the best possible way!  That’s probably the film’s funniest line.)  Constance Zimmer was good as Dr. Cale, albeit a bit too one note.  And I loved Michael Dorn (Worf from Star Trek: The Next Generation and Deep Space Nine)’s cameo as the voice of the Minotaur!

It was interesting to see that the incident that leads to Steve Trevor’s crashing into Themyscira in this film was his aerial battle with a Parademon.  That connects this film nicely with the events of Justice League: War, which launched this new animated continuity.  But I’m confused, then, about the timeline that follows.  Does Diana move in with Julia and Vanessa AFTER the events of War?  In this film, we see Diana debut her Wonder Woman costume to Julia and an older Vanessa (who has already moved into her goth phase), so presumable significant time has passed… but didn’t Diana wear that costume in Justice League: War, which presumably would have taken place right after she entered man’s world with Steve Trevor?  (Darkseid’s Parademons were already on Earth when Diana and Steve left Themyscira, so I assumed that War took place immediately afterwards.)  So I’m a bit confused about the timeline…

* Wonder Woman and Steve’s bringing old Julia along on their mission was pretty dumb.

* Dr. Cyber’s snake logo looked a lot like the emblem of the Cardassia Union on Star Trek: Deep Space Nine!

* After keeping Dr. Cyber off-screen for so long, I was expecting her appearance to be more significant… and then when Medusa takes her out so easily, I wondered if we’d learn there was more to Cyber than that robotic outfit… but, nope.  Oh well!

* I was glad Steve Trevor alluded to Diana’s fling with Superman, which was a big deal in DC’s “New 52” relaunch and also the early films in this animated continuity based on that.

* I loved that Wonder Woman changed into a more classic version of her costume for the final battle!  That costume design looked great, a nice mix of her classic costume with some Amazonian flair.

* The final battle was appropriately large-scale.  The animation was very strong and the action was suitably epic… and I loved how bad-ass Diana was in the fight.  (Blinding herself with Medusa’s own venom?  Yowza!)

* It was pretty clear that Dr. Cale was evil, as confirmed in the mid-credits scene.  I’m surprised Wonder Woman just lets her go scott-free, though.  (AND Wonder Woman leaves her sword behind??  That’s weird.)  This epilogue is obviously leading into a future story.  Will this film get the sequel that the 2009 animated Wonder Woman film didn’t…?  We’ll see…

Frankly, the best part of this blu-ray was the additional short film focusing on Death from Neil Gaiman’s Sandman series.  Several of the previous DC animated films had been accompanied by an additional “Showcase” short film, spotlighting a lesser-known character from the DC Universe.  It had been years since we’d gotten any new “Showcase” shorts, so I’d assumed this series was defunct.  I was delighted to see it back here.  The Death short was terrific, with exactly the type of mature take on a super-hero story that I’ve been wanting these direct-to-DVD/blu-ray animated films to be.  This short is not aimed at kids.  It depicts serious issues such as depression and suicide.  But it’s handled in a very sensitive way, providing an effective underpinning to a moving short story.  This is the top of mature content I want to see in these films, rather than nudity and violence.  This Death short film isn’t even advertised on the blu-ray’s cover.  But it’s a highlight of this package.

For fans of DC animation, I encourage you to check out this fantastic, in-depth interview with James Tucker, who is one of the main overseers of these DC animated films, and someone who has been involved in DC animation since the days of Batman: The Animated Series.  It’s on the Wordballon podcast — a wonderful comic book conversation show hosted by John Siuntres.  I’m a big fan of this podcast.