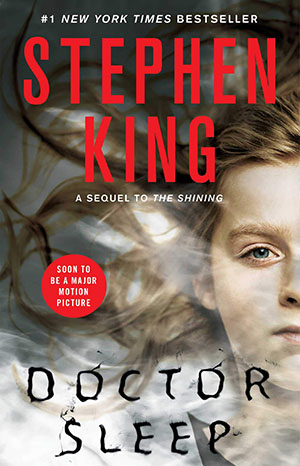 Published in 2013, Stephen King’s novel Doctor Sleep is his long-awaited sequel to The Shining (which was originally published in 1977).  The book depicts what happened to young Danny Torrance after escaping, with his mother, the horrific events at the Overlook Hotel.  After recently reading The Shining (for the first time) and rewatching Stanley Kubrick’s film (for the umpteenth time), I was excited to continue and read Mr. King’s sequel novel!

The book is terrific.  It is extremely difficult to craft a satisfying sequel (to a story in any medium) so long after the original.  And, as Mr. King himself admits in his afterword, The Shining has gained near mythic status among his oeuvre.  A sequel must not just equal the original novel, but also the audience’s fond recollections of the original, and that is an extremely difficult task.

I was impressed with how much Doctor Sleep felt of a piece with The Shining, despite the decades in between the writing of the two books.  I loved that Mr. King mimicked certain aspects of the novel’s structure for his sequel (for example, opening with a section called “Prefatory Matters,” and titling the climactic section late in the book “Matters of Life and Death”).

Boy, it’s tough to read how hard a time Danny Torrance had growing up.  It makes perfect sense, of course.  Even a normal boy (one without a Shine to serve as a magnet for ghosts and other horrors) would have a hard time recovering from having his father try to murder him and his mom!!  My favorite aspect of Doctor Sleep is the way the novel really dug deep into the character of Dan — even deeper than what we’d seen in The Shining — and depicted in an unblinking but empathetic way how this young man clawed his way back to some sort of life out of the traumas he’d endured.

It’s tragic but feels right that Dan would sink into alcoholism just like his father.  I loved the way the book explored the culture of Alcoholics Anonymous.  (I imagine that those sequences drew significantly from Mr. King’s own experiences in AA.)  It was fascinating to explore this group and its members.  I loved the picture Mr. King painted of the close bonds between AA members, and how they would go out of their way to shepherd and support one another.  I loved how we saw in the book that Dan was able to create a new family for himself with his fellow AA members who he met and connected to in the small New Hampshire town in which he eventually settled after he stopped running from himself.

I was intrigued to see Mr. King’s depiction of the use to which Dan eventually put his Shine, after so many years of his feeling that it was a curse and an impossible burden.  I very much enjoyed the sections of the novel showing us Dan’s work with the elderly at Rivington House, a local a nursing home and hospice, and how he was able to help comfort them as death approaches.  I would never have predicted, from The Shining, that this is where Dan would wind up, but it feels perfectly right.  I also loved reading about the death-sensing cat, Azzie.  (I’m glad Mr. King chose not to explain the source of this cat’s very specific sensitivity!)

Whereas the main villain in The Shining was the Overlook Hotel itself, here in Doctor Sleep we are introduced to the members of The True Knot.  This band of near-immortals seek out children with the Shining and consume their Shine, using that to extend their lives.  As he has done so often in the past, Mr. King was remarkably successful in creating terrifying villains for the story.

After Dan, the other main character of Doctor Sleep is a young girl named Abra.  She has an even stronger Shine than Dan ever did.  As such, she finds herself in the sights of the True Knot.  I loved the way Mr. King allowed us to drop in and out of Abra’s childhood as she grew up, and I appreciated the slow way in which she and Dan were gradually joined together.  (The scene in which they finally meet in person, on a park bench, is one of my favorite moments in the novel.  I love how important and cathartic it winds up being for both of them!)  Abra becomes a wonderful heroine as the story develops.  The reader really gets to know and like her, rooting for her and fearing for her as the story unfolds.

I also really enjoyed the way Mr. King developed the small group of friends and allies who Dan discovers in New Hampshire (Billy, John, and Casey), and also how we got to know Abra’s family (especially her great-grandmother Concetta).

Early in the book, I thought the orderly Fred Carling was going to develop into a secondary villain; another adversary for Dan, in addition to the supernatural True Knot.  (When we first meet Fred, he reminded me of the sadistic Percy from The Green Mile.)  I was surprised and pleased that the novel didn’t go down the path I’d expected.  Damn if Mr. King didn’t make me cry over that jerk Fred by the final pages.

I was delighted by Doctor Sleep, and eager to see the recent film adaptation.  I’ll be back on Wednesday with my thoughts on the film!  (Short review: I thought it was great!  More detailed thoughts to come…)