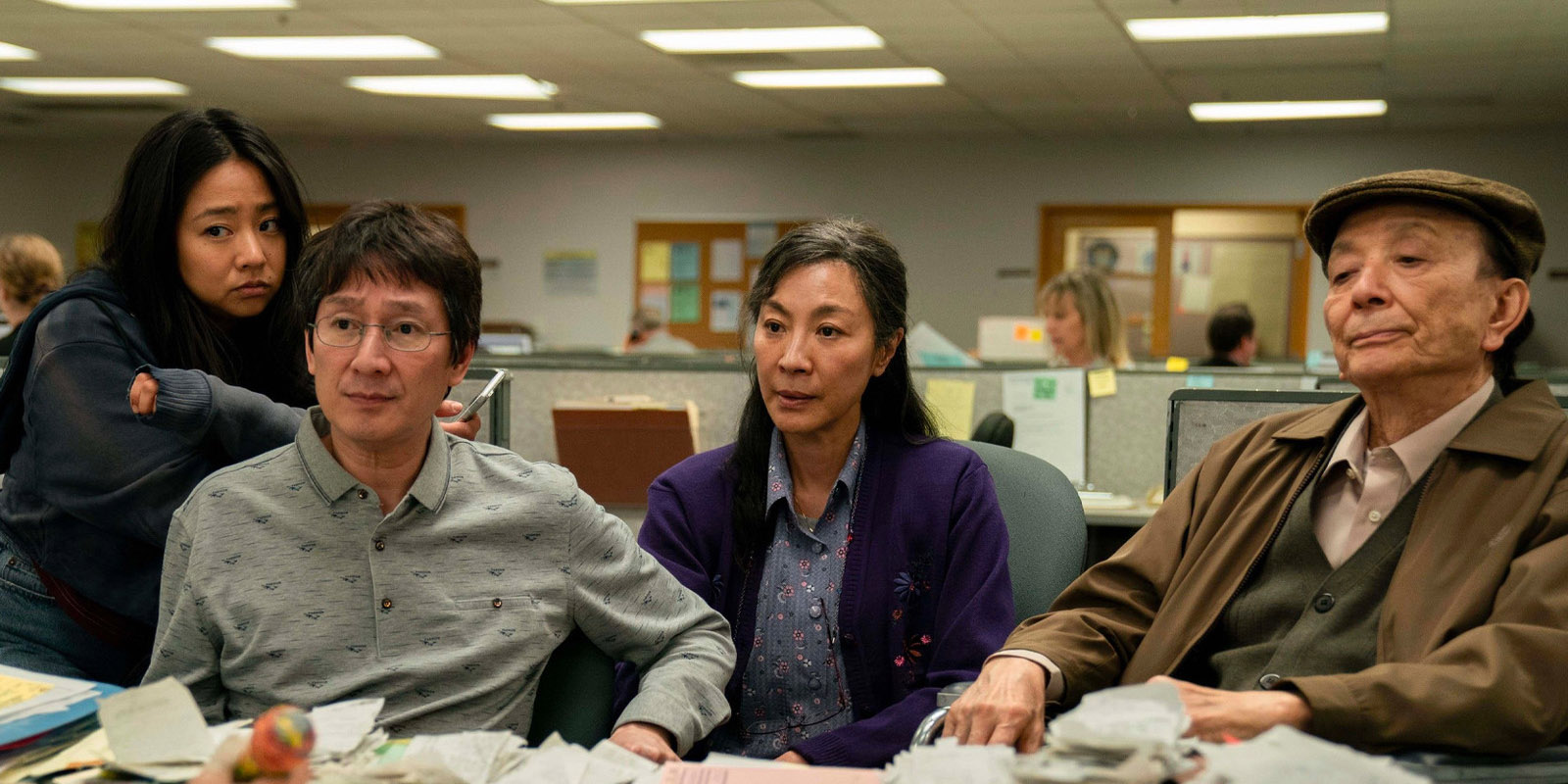 Josh Reviews Everything Everywhere All at Once

In Everything Everywhere All at Once, Michelle Yeoh stars as Evelyn Wang.  Evelyn is a crotchety middle-aged woman who runs a laundromat.  She’s frustrated that her business is struggling and in trouble with the IRS, she’s frustrated by her meek husband Waymond, and she’s frustrated by her teenage daughter Joy.  Most of all, she’s concerned about putting a positive spin on her life, family, and business for her elderly father Gong Gong, who has just arrived from China.  So things aren’t going that great for Evelyn, and that’s before her life is exploded when a version of Waymond from an alternate universe takes over Waymond’s body and tells Evelyn she might be the key to defeating a powerful villain who has set out to destroy the multiverse.  This launches Evelyn on a wild adventure interacting with multiple versions of her family, friends, and herself!

The film, written and directed by “Daniels” (the team of Dan Kwan and Daniel Scheinert) is a true delight from start to finish.  It’s a terrific adventure story with great action; it’s funny and weird and exciting and moving and very sweet.  It’s a wonderfully entertaining concoction, and I highly recommend it.

I’ve been a fan of Michelle Yeoh’s for decades.  She is the perfect woman to anchor this film.  She’s so delightfully believable and real as the worn-down version of Evelyn who we meet at the start of the film.  At the same time, she’s such a great actor that she is able to convincingly create many different versions of Evelyn as the film unfolds, and they’re each every bit as believable and real.  Ms. Yeoh is also a phenomenal action performer, and so when Evelyn accesses her multiverse personas and gains the ability to fight and kick ass, Ms. Yeoh has the perfect combination of skills to bring that version of Evelyn to life on screen.  This is a wonderful showcase for all of Ms. Yeoh’s talents, and she shows in every frame of the film how terrific and multi-faceted she is.

Speaking of talents, there is Ke Huy Quan as Evelyn’s husband Waymond.  For my whole life I have adored Mr. Quan’s work as a kid as Short Round in Indiana Jones and the Temple of Doom and as Data in The Goonies.  I love those movies, and I feel a deep love and affection for Mr. Quan’s work in those roles.  Sadly, as Mr. Quan grew up, he found few opportunities as an Asian American actor, and eventually he gave up acting.  Decades later, after seeing Crazy Rich Asians, Mr. Quan decided to explore a return to acting.  Thank goodness he did, and how lucky we all are that the Daniels cast him in this film.  To say that Mr. Quan is amazing and perfect as Waymond is an enormous understatement.  Every second he’s on screen, Mr. Quan demonstrates what a remarkable acting talent he still is (and apparently has always been).  He’s fun as the meek, mild version of Waymond we meet when the film begins… but it’s as we start to see the alternate versions of Waymond that Mr. Quan truly shows off his skills, creating many different versions and visions of this character.  Mr. Quan gets to deliver a key monologue in the third act that spells out the film’s main themes, and it is extraordinary — Mr. Quan is so emotionally affecting.  What an impressive achievement, and what a wonderful payoff to what has apparently been a tough road for Mr. Quan in Hollywood.

The rest of the cast is great as well!  Jamie Lee Curtis is phenomenal as Deirdre, the weary IRS instructor.  She’s terrific as the cruel, queen-of-her-little-fiefdom version of Deirdre we meet at first, and even more fun as some of the wild other versions of Deirdre we see as the film continues.  James Hong (one of the best and most recognizable Asian American actors working today; most recently he voiced Mr. Gao in Turning Red) is note-perfect as Evelyn’s father Gong Gong.  Stephanie Hsu (Mei Lin on The Marvelous Mrs. Maisel, and Shang & Katy’s friend Soo in Shang-Chi and the Legend of the Ten Rings) is terrific as Evelyn’s daughter Joy, and all of Joy’s alternate personas.  She brings a lot of depth and nuance to the film’s depictions of Joy’s struggles with despair.  Jenny Slate is funny in a small role as a customer at Evelyn’s laundromat.  Tallie Mendel is great as Joy’s girlfriend Becky.

As a kid growing up, I remember being so happy when the concept of parallel universes, one I knew well from reading Marvel and DC comic books, made it onto television with the 1993 episode of Star Trek: The Next Generation called “Parallels” (in which Worf finds himself jumping between parallel universes).  It’s wild to me to see how mainstream the “multiverse” concept has become these days.  I bet the Marvel team isn’t so wild about this film’s making it to theaters only a few weeks before the release of Doctor Strange and the Multiverse of Madness...!!  But as a fan, I am delighted.  I was impressed by how well the Daniels were able to bring this concept to life in this film, in a way that was very easy to understand and follow, without getting too dumbed down.

Everything Everywhere All at Once is an exciting adventure, but for me what makes it stand out is the film’s often funny, silly tone.  This isn’t a farce — it’s a serious adventure story, with real character drama at its heart.  But the key to how endearing I found the film to be is the way it was unafraid to veer into the silly, from all the outlandish things characters have to do in order to access their alternate-universe personas, to some of the crazier universes, to a whole sequence that references to Ratatouille!

The film draws its influences from many previous sci-fi adventure stories — in movies and other media — that came before.  There are sequences that seem particularly inspired by The Matrix in particular.  (I’m thinking of all the scenes in which characters use their tech to access the skills they need in that moment.)  But like all the best films of this kind, these different inspirations have been remixed into something that feels fresh and new.

If I have one complaint about the film, it’s that it’s a little too long.  The film makes its central point in Ke Huy Quan’s monologue, but then there’s still an extended action climax — with a LOT of slow motion — that I thought could have been shortened.  Once the film made its point, I’d have liked to have seen things wrapped up a little faster.

Overall, this film was a delight.  I love seeing these types of (formerly) nerdy sci-fi concepts brought to life in such a fun, entertaining way.  The cast is extraordinary, and I walked out of the theater feeling like a million bucks, inspired by the film’s joyous, life-affirming message.