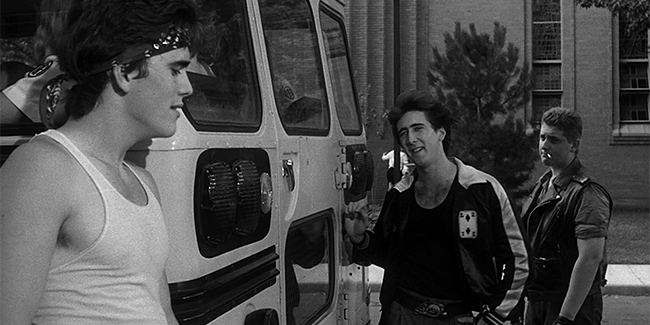 Rumble Fish centers on Rusty James, a teenage tough-guy who, when the film opens, is being challenged to a rumble by the leader of a rival gang.  Like The Outsiders, the film is set in Tulsa.  I believe it is also meant to take place in the sixties, but the film’s exact setting in time, like many details of the story, have been intentionally left somewhat hazy.  Rusty James is in awe of his older brother, known as “the Motorcycle Boy”, but when the Motorcyle Boy returns to town after a long time away, it’s clear there is something off about him.  Is he crazy, or has he discovered truths about life that elude young Rusty James?

Although Rumble Fish was made immediately after The Outsiders, with much of the same cast and crew, and both are adapted from a novel by S.E. Hinton, the two films are completely different.  Whatever your thoughts on either film, I think you have to be impressed by the way Mr. Coppola was able to change his style and approach to create two tremendously different and distinct pieces of work.

There’s no question that Rumble Fish was intended to be more of an “art film” and less of a crowd-pleaser than The Outsiders.  The film is shot in black and white, and the story is presented in a somewhat stream-of-consciousness, dreamlike fashion.

The film didn’t entirely work for me, but I quite enjoyed seeing Mr. Coppola’s fantastic skills as a filmmaker on fine display here.  The black and white photography is absolutely gorgeous and very memorable, with a striking use of light and shadow.  (I was delighted to learn, watching the blu-ray’s special features, that many of the shadows seen on buildings in the film were actually painted on!)  The film is filled with interesting shots, including a few striking split focus shots (in which both the foreground and the background are both in focus).  The dialogue is stylized, not really naturalistic but interesting with an almost theatrical style to it; at the same time, there’s a lovely realistic quality to the use of overlapping dialogue.  This contrast between a highly stylized and yet naturalistic approach is emblematic of much of the film, and is part of what made it so interesting to me, even though the film left me somewhat cold and kept me at something of a remove.

As with The Outsiders, Mr. Coppola has again assembled a terrific young cast.  I loved Matt Dillon in The Outsiders and he’s even better here as Rusty James.  What a unique and memorable leading man performance this is!  Mr. Dillion presents Rusty’s tough-guy facade but also his confused, lonely, childlike interior.  It’s really great; I had no idea Mr. Dillon was capable of this kind of nuanced performance.  There’s a lot of depth to Rusty James, and I felt a lot of empathy for him as the film progressed.  (There’s also just the right amount of self-aware humor in the film, and in Mr. Dillon’s performance.  I don’t know whose idea it was to have Rusty James’ spirit smoke a cigarette when he has his mid-movie out-of-body experience, but whoever it is was a genius; that moment really made me laugh.)

Similarly, Diane Lane jumped off of the screen in her few scenes in The Outsiders, and she’s terrific here as Patty, a girl in Rusty James’ orbit.  Ms. Lane has a luminous movie-star presence that is magnetic.  As in The Outsiders, I wish she was in more of the movie.  She and Mr. Dillon have great chemistry.  Their scenes together were my favorite scenes in the film.

Mickey Rourke is a hoot as the enigmatic Motorcycle Boy.  Mr. Rourke turns in a truly bizarre performance.  In the movie’s early scenes, Motorcycle Boy is built up as a fearful and awesome presence, a gang-leader who was the coolest of the cool, the toughest of the tough.  And yet when he appears, we see that he’s a disturbed, perhaps broken young man.  He’s clearly got trauma in his life (the glimpses we get of his and Rusty James’ home life are horrifying), and as the film goes on we discover that he just might have a death wish.  Mr. Rourke made the decision to basically whisper all of his dialogue.  It’s very weird, but also extremely memorable.  Mr. Rourke becomes an incredibly creepy, magnetic presence in the story.

I was excited to see Nic Cage — in what I believe was his first film role!! — as Rusty Jame’s friend turned foe, Smokey.  Smokey doesn’t have too much to do in the film, but Nic Cage adds just enough Nic Cage spin to his delivery that the character was instantly notable.  Dennis Hopper (who appeared in Mr. Coppola’s Apocalypse Now) explodes into the movie for a few memorable scenes as Rusty James’ alcoholic father.  He looks sort of like Andy Capp — it’s an over-the-top cliche depiction of a movie drunkard — but Mr. Hopper’s electric delivery makes all of his scenes interesting.  Laurence Fishburne is another Apocalypse Now veteran who returns for this film, although I didn’t quite understand the character he played.  He seems to be a friend of Rusty James who is able to move between the different gangs… though his almost otherworldly nature made me wonder whether the character actually existed at all, or was rather a figment of Rusty James’ imagination.  Rumble Fish is abstract enough that I think that’s possible.  It’s also fun to see a young Chris Penn (Reservoir Dogs, True Romance) as another member of Rusty James’ gang.

I criticized the score of The Outsiders, but I loved the score of Rumble Fish!  This was one experimental aspect of the film that I thought worked like gangbusters.  The percussive score, created by The Police drummer Stewart Copeland, was dynamic and gave the film a propulsive energy.  (The ticking clock energy of the score also tied in beautifully to the film’s obsession with time.  We can feel time running out for Rusty James and the Motorcycle Boy; the film is filled with shots of clocks or shots that otherwise suggest time, and the passage of time.)

Despite that, I have to admit that I got a little bored in the second half of the film.  There’s not a lot of plot in the film, and despite the film’s short run-time, my attention started to waver in the second half.  The film’s experimental nature couldn’t quite hold my interest all the way through.

Still, there was enough that was interesting that I’m glad to have seen it.  I admired the bold experimentation of Mr. Coppola and his team, and I love Mr. Coppola’s ambition in trying to create a film with many levels of meaning beyond the superficial plot level.  It was fun to try to suss out some of the different layers as I was watching the film and thinking about it afterwards.  And though Rumble Fish is a period piece (it was made in the eighties, and takes place in the sixties), I was struck by how very 2021 the film felt when, towards the end, Rusty James beseeches his brother that “I just want you to see me, man.”  Wow!