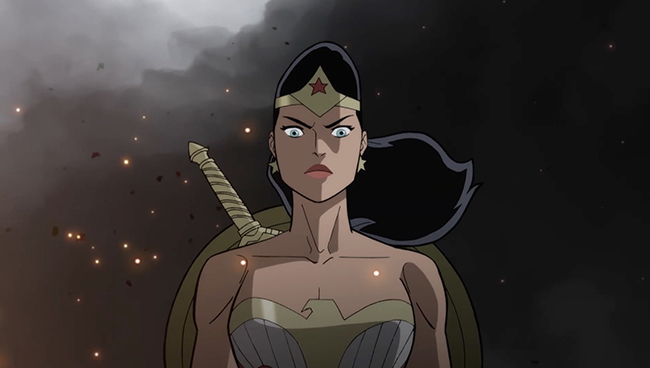 In the latest DC animated direct to DVD/blu-ray film, Justice Society: World War II, the Flash winds up zapped from present day back to World War II. There he encounters the Justice Society, a group of superheroes led by Wonder Woman who are fighting alongside the Allies in Europe.

I thought this was a solid, if perhaps unspectacular, film.  I liked the WWII setting.  That was a fun departure from the usual tone of these DC animated films, and there were some cool combat set pieces.  I particularly enjoyed the initial big battle in a smashed French village.  Have I seen that sort of thing before, in Band of Brothers and many other WWII films?  Yes, for sure.  But it was still very well executed with some exciting action animation and gorgeous backgrounds.

From the film’s title and cover art, I wasn’t expecting this to be a Flash story!  So that was a surprise, but not an unpleasant one.  Matt Bomer (who previously voiced Clark Kent/Superman in the 2013 animated film Superman: Unbound)  was great as the voice of Barry/Flash, and the filmmakers did a nice job exploring Barry’s character through this story. That first picnic scene with Iris did a nice job at depicting the basic conflict between Barry’s superhero life and private life.  And I was pleased to see Iris depicted as a person of color, as she often has been on TV and film recently.

I enjoyed that Wonder Woman was such a major character in the film. I really dug Stana Katic’s voice work as Diana.  It’s interesting how several recent DC stories, across different media, have embraced the idea that Diana was around decades before the “present day” of the DCU.  (In the 2017 Wonder Woman feature film, Diana entered man’s world during World War I; the most recent “Infinite Frontier” relaunch of the DC comic book continuity has taken the same approach.)  It’s fun to see Diana kicking ass during WWII.  I like that this film embraced the idea of Diana as a warrior and a leader.  I love seeing the character in such a central role, and depicted with such strength.

I also enjoyed seeing the other Justice Society characters depicted on-screen: Hourman, Black Canary, Hawkman, etc.  We didn’t get to know any of these characters that well, but they were interesting enough for the screen time they got.

I really enjoyed Chris Diamantopoulos (Silicon Valley) as Steve Trevor.  I loved the film’s depiction of the dynamic between Steve and Wonder Woman.

The film was a little choppy, particularly in the opening minutes.  The opening credits were created in a very reto, old-school style, which I liked.  Then we jumped to a scene with modern animation, but that was set in the World War II era.  (This was the scene of FDR watching film footage of the Justice Society characters, somewhat clumsily giving us exposition on the Justice Society characters and their powers.)  Then we jumped to the present day of the DCU, with Flash and Superman in Metropolis.  Then we followed the Flash back to WWII, with little explanation as to how or why he’d traveled back in time.  None of this was bad, per say, but it felt choppy to me.  I’d have preferred to either start 100% in modern day, following Flash as he goes on this adventure (without the exposition-filled prologues)… OR have the story stick to taking place 100% during WWII, following Wonder Woman and the Justice Society and their encounter with Flash from their perspective (and then perhaps only later showing how Flash got sent back in time, perhaps as a flashback while Flash tells the story).  The jumping back and forth and changes in tone and animation style didn’t feel smooth to me, particularly as the story was just getting going.

Watching this film, I was struck by the interesting pacing.  There were lots of silent pauses, which are unusual for an animated film.  It was an interesting choice!  It didn’t quite work for me, as I found the film to be somewhat choppy (as I was describing in the previous paragraph).  Still, it’s cool that the makers of these films are trying new things.

From the blu-ray box art and title, I’d expected this film to be a stand-alone tale, as many of these direct-to-DVD/blu-ray DC animated films have been.  However, I liked that the present-day sequences turned out to be in continuity with last Superman animated film, Superman: Man of Tomorrow.  I guess DC/Warner Brothers is restarting a new continuity in these animated films.  I’m interested to see where that goes.

* The characters have some cursory discussions over the possibility of Flash’s time travel causing a future paradox, but none of that made much sense to me.  They don’t want Flash to change history, but surely he already did that the second he emerged into the past, right?  (The film ultimately gives a satisfying explanation as to why the Flash’s actions did NOT change history… but none of the characters knew that yet!)

* I cringed at the awkward scene where the Justice Society vote to call Flash “Future Boy”.  That nickname would have worked better as a joke, rather than a serous decision by the characters!

* I liked the sequence in which our heroes make an assault on a Nazi-held castle.  (Though that sequence made me expect to see Steve Rogers!)  There was some good creepy stuff in the castle.  I loved the stuff with Dr. Fate.

* I liked the Superman/Shakespeare stuff.

* I liked the sequences in the submarine; those were very cool.

* It was a fun surprise seeing Aquaman in the film!  I liked how the film played his loyalties.  I wasn’t expecting that at first.

* Somehow the characters travel from France to the Bermuda Triangle and then to New York City… all in the same day?  I wish the film had a stronger sense of timing and/or geography.

* I also wish the film had a better bad guy.  Who actually is the main villain of the story?  I’ve seen the film and I’m not sure.  Is it the mind-control Atlantean guy? I don’t even know his name!

I love that the recent DC animated films have brought back the “DC Showcase” short films.  In this case, we get a fun short featuring Kamandi: The Last Boy on Earth.  I LOVED that the short was animated with a distinctly Jack Kirby influenced style!  That was very cool, and very well done.  I loved that the film opened with a depiction of a classic Kirby-style illustration of the smashed Statue of Liberty.  (And I smiled at the Planet of the Apes style musical score.  That was very appropriate for Kamandi, and particularly appropriate for shots of a smashed Statue of Liberty!)

I’m uncertain of what the timeline of Kamandi is supposed to be.  The creature Golgan says the Great Disaster happened an age ago; but Kamandi is just a young man, and I got the impression that he and his father hid from the Disaster when it struck.  S how many years after the Great Disaster is this story supposed to be set?  (Speaking of Kamandi’s father… explain to me again why Kamandi’s dad named him after the bunker in which they were hiding…?  That didn’t make much sense to me!)

I enjoyed the bizarre post-Disaster setting of the story; it was fun to get a taste of the weird world of Kamandi.  I’d love to see more!