Skip to the content
HomeBook ReviewsJosh Reviews Nobody Does it Better: The Complete, Uncensored, Unauthorized Oral History of James Bond

Josh Reviews Nobody Does it Better: The Complete, Uncensored, Unauthorized Oral History of James Bond 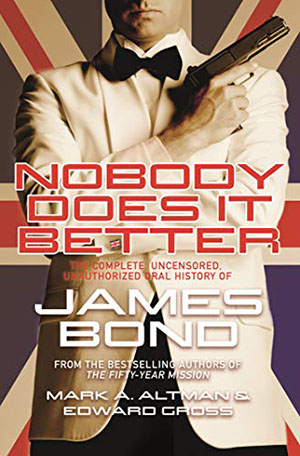 I am a huge fan of the oral histories by Mark A. Altman and Edward Gross.  My favorite is their phenomenal, voluminous two-part look back at the entire history of the Star Trek franchise: The Fifty-Year Mission.  I’ve also devoured and enjoyed their oral history of Battlestar Galactica (both the original series and Ronald D. Moore’s wonderful reimagining), called So Say We All, as well as their recently-published oral history of the Star Wars saga called Secrets of the Force.  But, wow, I might just have a new favorite: their 2020 oral history of James Bond: Nobody Does it Better.

This enormous book is a staggeringly in-depth history of the entire fifty years (and counting) history of the James Bond film series.  This book was pure joy for me from start to finish.  I highly recommend this book to all Bond fans out there!

Once again Mr. Altman & Mr. Gross utilize the oral history format to tell this story.  They have interviewed an extraordinary array of men and women who have been involved with this series both in front of and behind the cameras from across the decades.  Their personally-conducted interviews have been supplemented by additional interview material from a variety of other sources, resulting in a stunningly comprehensive and in-depth look back at the history of Bond.  Everyone you could possibly want to hear from has been included here.

I love the oral history format, and Mr. Altman & Mr. Gross have perfected its use.  It’s wonderful to hear the stories behind these films right from the mouths of the people who were involved in making them.  Because we’re getting to experience the history of Bond through the stories these people are telling, the book never gets boring, even when we get into some of the more dreadful Bond pictures.  Quite the opposite: it’s super-fun to explore the making of those bad movies and to get a taste of what might have gone wrong, and to see the (often differing) reflections of the people who were involved as they look back.

The book begins with a fascinating history of the Bond franchise, of how that first film, Dr. No., ultimately got made, and how Cubby Broccoli and Harry Saltzman became the stewards of the film franchise.  (The Broccoli family remain in charge of the Bond films to this day, a remarkable and unprecedented achievement in Hollywood.)  After that, to my great delight, the film goes film by film through each and every installment in the series — including the one non-Broccoli produced Bond film, Never Say Never Again — all the way up through Spectre.  (The book was published a year ago, so it doesn’t cover the most recent Bond film, No Time to Die.  I hope Mr. Altman and Mr. Gross have started working on the sequel!  Or perhaps I can dream that they’ll update this book in the future, as Tom Shales has updated his SNL oral history Live From New York.)

As the book guides us through the history of each film, we get to hear from pretty much every single actor who had any role of consequence in any of the films… as well as the writers, the directors, the editors, the directors of photography, the production designers, the stunt coordinators, and so many more.  We get to hear from the composers about the score and we get to learn about the creation of the title songs and often-iconic opening title sequences.  I was particularly fascinated to read about the Bond movies that weren’t and the paths not taken, as the book explores the development of each film and gives us teases of avenues the Bond team explored before winding up with the films that got made.

The book allows us to hear from several critics and commentators who give us their opinions on the films.  Lisa Funnell (author of For His Eyes Only: The Women of James Bond) is a particularly welcome presence, analyzing the roles of the “Bond girls” and other female characters in the films as the series progressed (or sometimes didn’t) through the decades.  (I laughed out loud when Ms. Funnell asked the same question I’ve often asked: what the heck happened to Honey Rider’s pants after she is captured by Dr. No’s goons?  Oy!)  The book makes extensive use of Ray Morton (senior writer at Script magazine) and Ric Meyers (author of For One Week Only: The World of Exploitation Films) who give their fascinating opinions on the films.  I didn’t always agree with them — though I often did! — but either way, I loved reading their extremely well-informed opinions on the films.  Mr. Altman and Mr. Gross provide much of their own commentary as well, and it was fun to see where I agreed and disagreed with them.  For the most part we were of the same mind.  (Like them, I love On Her Majesty’s Secret Service, and like them, I agree that “there is no more disappointing film in the Bond ouvere than Spectre.”  Unlike them, I have a warm spot in my heart for The Man with the Golden Gun, despite its silliness, and I quite like Tomorrow Never Dies, a film about which the authors were split, with Mr. Gross being a fan while Mr. Altman is not.)

Nobody Does it Better is over 700 pages long, but I could have happily read 700 pages more.  Actually, it’s impressive to me how much material Mr. Gross and Mr. Altman stuffed into those 700-plus pages!!  To say this book is in-depth would be a dramatic understatement.

I could not be happier with this book.  It’s a magnificent achievement and a must-read for all Bond fans.