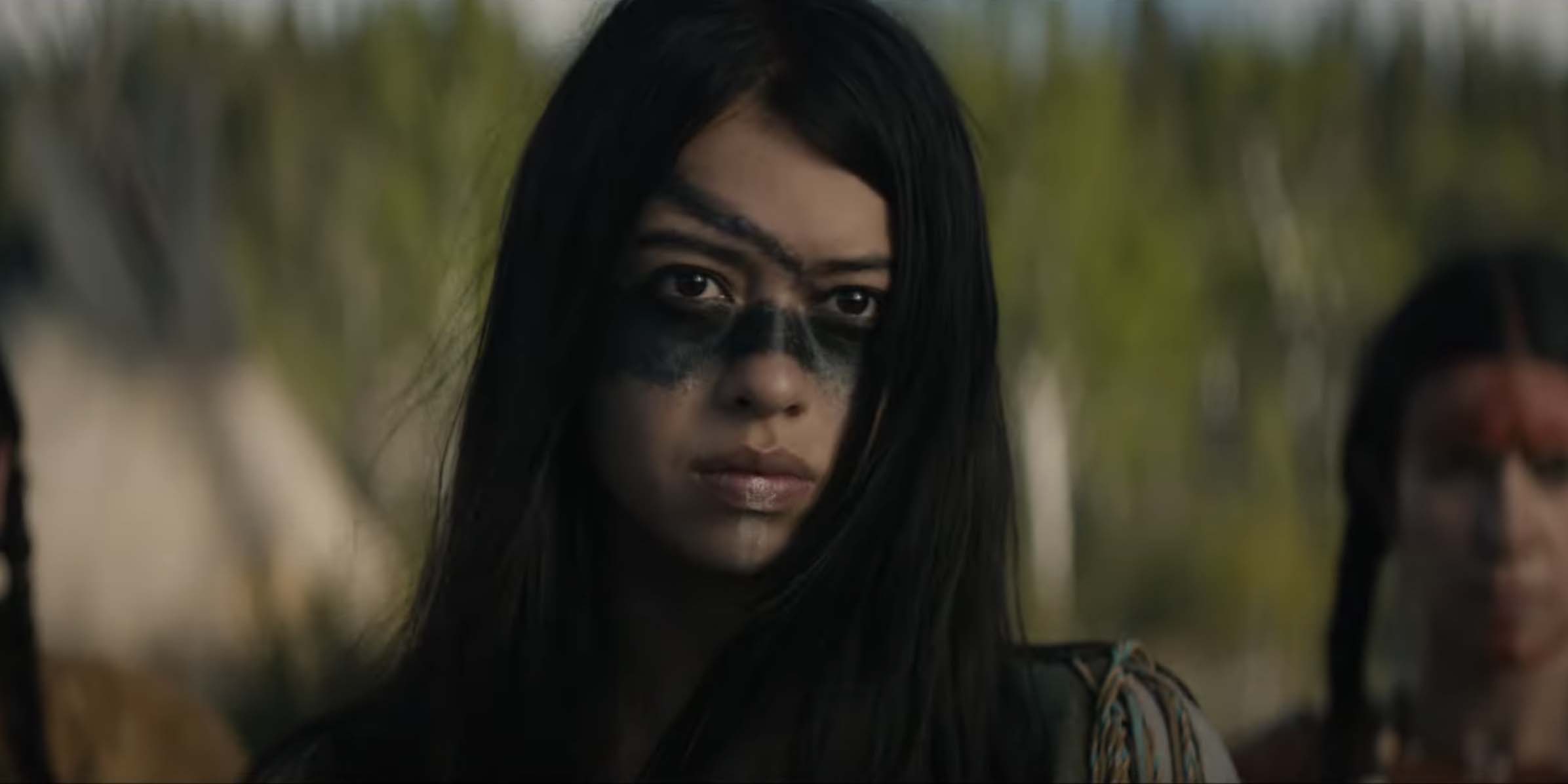 Did I… did I just actually watch a great Predator sequel??  I almost can’t believe it!

Predator is one of several sci-fi franchises for which I have a lot of affection, but which has been floundering for decades with one less-than-successful sequel after another.  (I’m thinking also of series such as Alien, The Terminator, and Highlander…)  That first Predator film, from 1987, is a wonderful eighties concoction — over-the-top and ridiculous in a lot of ways, but its combination of sci-fi with action and horror works like gangbusters, and the film’s great cast (led by Arnold Schwarzenegger) are so likable that they’re a ton of fun to watch go through this adventure.  I remember being so excited for the 1990 sequel, Predator 2, and then being rather mystified by the film’s many bizarre choices (transporting the setting into the future, replacing muscular Arnold Schwarzenegger with an extremely hyper Danny Glover…)  I have a lot of love for the goofy Predator 2, but there’s no question the movie doesn’t work.  I was initially excited by the prospect of an Alien vs. Predator film (the Dark Horse comic book mini-series that inspired the film were terrific, a clever blending of these two sci-fi/horror franchises), but both AvP films were disappointments.  2010’s Predators, produced by Robert Rodriguez and directed by Nimród Antal, is actually pretty decent.  It’s got a lot of love for the original (joyfully reusing, for instance, many of the great musical themes) and yet is different enough to not feel like a retread.  It’s got a great cast, though most of the characters are more one-dimensional than I’d hoped.  I’d have loved to have seen a sequel that moved that story forward, but sadly the film series re-set again with Shane Black’s The Predator, from 2018.  I was super-excited for that film; I’m a big fan of several of the films Mr. Black has written and directed (most notably Kiss Kiss Bang Bang, and I also really dug The Nice Guys), and Mr. Black was actually in the original Predator, as an actor!  But, wow, The Predator was a huge disappointment to me, an almost completely nonsensical and incomprehensible film.  (Someday I’d love to know the real story of what went wrong with the making of that film.)

Which brings me to Prey (a great title for a Predator sequel!!), written by Patrick Aison and directed by Dan Trachtenberg (who previously directed the wonderfully tense horror/sci-fi film 10 Cloverfield Lane).  (Both Mr. Aison and Mr. Trachtenberg are credited for the film’s story.)

Set in 1719 in the Northern Great Plains, Prey tells the story of Naru, a young Comanche woman.  Naru wants to be a hunter like her brother, Taabe, who seems to be the best young hunter in their tribe.  However, neither the men nor the women in her tribe believe that Naru is capable of being a hunter.  Naru insists on accompanying Taabe and several other young men when they set out to capture a mountain lion that gravely wounded another young hunter.  As they track the lion, Naru begins to suspect that something more dangerous than a lion, or even a bear, is out in the woods with them…

I really loved this film!  It’s a wonderful reinvention of a Predator story.  The film is tense and exciting, with several thrilling action and suspense sequences.

The decision to center this film around a Comanche tribe in the 1700’s is a very clever approach; it gives the film a wonderful new flavor that none of the previous Predator films ever had.  It also helps the film overcome my general dislike for prequels.  That’s because the film doesn’t really feel like a prequel.  The film is not telling the story of how stuff we’d seen before came to be.  It feels more like a new story in a new setting with new characters, which of course is just what I want from a Predator sequel (or pretty much any sequel, for that matter).

The film is anchored by Amber Midthunder as Naru.  Ms. Midthunder was a standout on Legion, and it’s a pleasure to see her step up into a headliner role here.  Ms. Midthunder, an Assiniboine Native American and a member of the Fort Peck Sioux Tribes, is a wonderfully charismatic actress.  Her face and eyes are incredibly expressive, which is crucial in a role like this in which she is silent for long stretches of time.  Ms. Mindthunder has a compelling, modern energy that keeps the film feeling alive and very much of the present day, rather than a stodgy, stiff period piece.  At the same time, she’s completely believable as this Comanche young woman from the 1700’s.  It’s a wonderful performance.

I love how deeply the film dives into the world and culture of Naru’s Comanche tribe.  I’m not in a position to judge the accuracy of what we see on screen, but it feels real to me and fully fleshed out.  The film gets a lot of suspenseful mileage out of allowing is to start to like these people and then to worry about the havoc that we know the Predator is capable of wreaking.

Dakota Beavers is strong as the other major character in the film, Yaru’s brother Taabe.  I like that the film shows us that Taabe is confident and capable, well-deserving of the position we see him achieve among his people.  At the same time, he’s not a one-dimensional jerk who we’re rooting against.  He cares for Yaru and is far more supportive of her desire to become a hunter than almost anyone else is… while at the same time he is concerned for her and is reluctant to allow her to put herself in danger.  Mr. Beavers is great at walking that line.  We all know the film is going to wind up with Yaru going one-on-one against the Predator, and I was glad that I wasn’t rooting against Taabe; quite the contrary, I didn’t want to see anything too awful happen to him.

If the film has any weakness it’s that, despite the very different setting, it does have basically the same plot as most/all of the previous Predator films.  We hit a lot of the same beats; we watch the characters slowly become aware of the Predator; we watch the Predator watching them; we watch the group of heroes slowly get winnowed down; etc.  But what impressed me about Prey is that the film still feels different and fresh despite those plot similarities.  This is what a good sequel should be able to find a way to do.

Whereas many of the previous Predator sequels were drowning in call-backs (as is often the case in franchise sequels), I was glad that there was very little of that in this film.  The movie is stronger for standing on its own.  And when we get the one major callback to a line of dialogue from the first Predator film, it’s a great, fist-pumping moment.

(The other major callback is well-structured so that I think it works even if you don’t recognize its as a callback.  The arc of Naru’s winding up with that pistol is a little bit of plot business that I think totally works as its own thing.  But long-time fans will recognize that pistol as being the same one that the leader Predator gives to Danny Glover’s character out of respect at the end of Predator 2, which is a fun little piece of connective tissue between the movies.)  (Though it doesn’t bode well for Naru, actually, when one considers how another Predator eventually got possession of that gun.  But maybe it got it back somehow from a descendant of Naru’s…?)

Most previous Predator films have chosen to redesign the Predator, and not usually for the good.  The redesigns have tended to go bigger… but not better.  I don’t think any previous redesign has been able to equal the iconic original.  But, to my surprise, this redesign is terrific.  I really like this new version of the Predator’s face.  The skull mask is great — very much still looking like a Predator should, and also new and original.  (It’s very cool that we can see the Predator’s iconic jaw/mandibles even when wearing the mask!  What a clever touch!)  I also really like the look of the Predator’s armor and tech.  I love that the tech seems somewhat less advanced than what we’ve seen in previous Predator films (which is appropriate since this film is set hundreds of years in the past), though still futuristic enough to provide a fun (and scary) contrast to Naru and her fellow Comanche.  The film also makes extensive use of the Predator’s cloaking technology, and I was very happy with how great (and often beautiful, in a terrifying way) those semi-invisible visual effects shots all looked.

I’m impressed and happy to have finally seen a Predator sequel that I can unabashedly enjoy!  Prey is terrific.  It makes me happy to see that there’s still life left in this franchise.