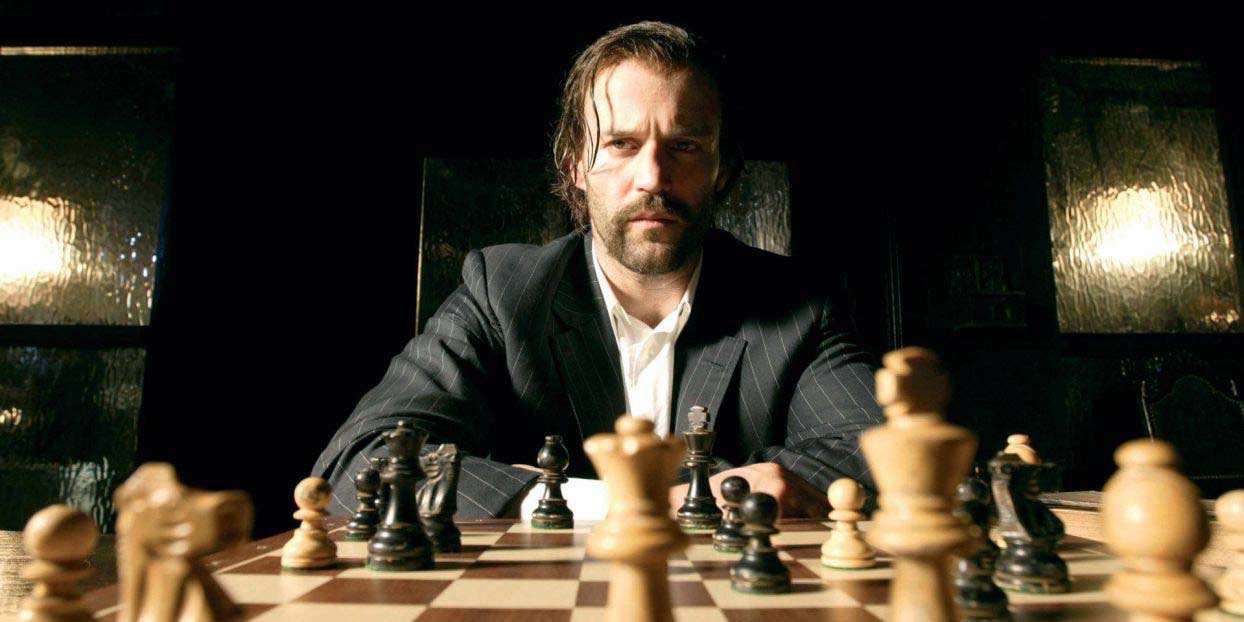 I’m a huge fan of Guy Ritchie’s first two films: Lock, Stock, and Two Smoking Barrels (1998) and Snatch (2000).  Mr. Ritchie followed that up with Swept Away in 2o02, which remains the only film Mr. Ritchie has directed that I haven’t seen.  It was brutally panned by critics at the time, but I’m curious and I’ll need to track it down one of these days.  Mr. Ritchie attempted to rebound from the bomb of Swept Away with Revolver in 2005, which was also generally panned by the critics.  I’ve only seen Revolver once, but I remember not understanding it and/or not liking it.  Recently I rewatched Lock, Stock, and Two Smoking Barrels and Snatch, and I decided to go back and give Revolver another look.

Jason Statham, who was great in supporting roles in Lock, Stock and Snatch, steps into the lead role here as Jake Green, who has just been released after spending seven years in prison.  Green has apparently developed a “formula” enabling him to win every game, and pull off every con.  He sets out to use this knowledge to get revenge on the crime boss, Macha (Ray Liotta), who wronged him.  Jake humiliates Macha at one of his casinos, so Macha sends his goons to kill Jake.  Jake escapes with the help of a mysterious twosome, Zach (Vincent Pastore) and Avi (André Benjamin), who tell Jake that they can help him escape Macha and also survive a fatal medical diagnosis if he gives them all his money and does whatever they say…

I respect the ambition Guy Ritchie clearly had in making his film.  Revolver attempts to take many of the stylistic elements that made Lock, Stock and Snatch so much fun — a twisty crime story with multiple colorful criminal characters, a fast-paced editing style that plays fast and loose with chronology, and healthy dollop of violence — and combine that with a deeper, psychological story.  Revolver has a lot on its mind, that much is clear from the beginning.  As Jake’s voice-over talks about the four key steps to his “formula”, and how a successful con-man can trick and outwit his mark, it’s clear that in a meta way this movie will be set up as a game or a con itself.  So as I was following the story, I was also keeping myself one step removed, looking at the bigger picture and trying to guess some of the film’s tricks and figure out what was really going on.  (Though I’d seen Revolver once before, probably around the time RocknRolla came out in 2008, I found that I couldn’t remember much of anything about it.)  I was intrigued by that meta structure, and I enjoyed the game of trying to keep up with the movie and figure out the truth of what was happening.  Watching the film (and then some of the blu-ray’s special features), it’s clear that Mr. Ritchie worked hard to embed layers upon layers of meaning into the structure.  Some were clear to me as I was watching the film, such as the film’s fascination with games and the way so many games are worked into the story, from chess to various gambling games.  Others that Mr. Ritchie and co. described in the special features (such as some of the numerology stuff) flew way over my head.  (I was also intrigued to hear some of them discussing the different layers of meaning in the film’s title; I’d only thought of a gun, but the ideas of a circular cycle have interesting connections with the film’s story…!)

The problem is that, when I got to the end of the film, I found that I had very little idea of what had just happened, or what any of it meant.  I don’t think I’m a total dum-dum (though perhaps Mr. Ritchie and his collaborators would think I am, if I didn’t understand this movie), but while I was intrigued by the movie as I was watching it, when I came to the end it felt to me like a letdown, because I didn’t feel the film satisfactorily explained what had happened.  I get the idea that much of what we saw isn’t meant to be taken literally — which is a wild and cool idea for a movie! — but I wasn’t left with a clear sense of what WAS meant to have happened, or how we were meant to understand it.  I feel like Mr. Ritchie’s sense of style, with all of his fast-paced and playful editing and interweaving characters and stories — techniques which contribute to the greatness of many of his films and even some of the most entertaining parts of this film — overwhelmed, in the end, the layers of meaning and psychological depth that I think they intended the film to have.  For me at least, those stylistic techniques muddled whatever message the film was meant to have.

I’m all for films where the end pulls the rug out on the audience.  (Some great examples include The Usual Suspects, Fight Club, and The Sixth Sense... I’d also list Vanilla Sky, though I know some people who don’t think nearly as highly of that film as I do…)  But for those types of films to work, 1) the story you’re following as you watch the movie for the first time has to make sense and be entertaining, even if you’re going to realize at the end that the story you thought you were watching wasn’t actually the truth of what was happening, and 2) when the twist ending comes and your mind, as an audience member, gets blown, this new version of reality needs to make sense and be understandable.  Unfortunately, I thought neither was the case watching Revolver.  I enjoyed certain bits and sequences.  (The cleverly-edited sequence towards the end, in which Sorter, the hit-man played by Mark Strong, switches sides and wreaks havoc, sticks out in my mind as a particularly magnificent piece of filmmaking.)  But for the most part, while watching the film, I was confused as to what was happening and so had a hard time connecting to and investing in Jake or his story.  And while I kept waiting for an “Ah Ha” moment to come, in which the pieces of the puzzle would fall into place and all would become clear, that moment never arrived for me, which left me feeling let down.  There are lots of articles that you can find online, digging into the meaning of the film.  Those are interesting to read, and I applaud those audience members who were able to connect those dots and understand what was happening, just as I applaud Mr. Ritchie & co. for telling such a complex, layered story.  Perhaps if I rewatched this film another time, some of this would become clearer to me.  But I don’t feel I want to invest that much more time into this film.  I needed it to be more effective on a first viewing, not just on the fifth.

The cast is strong.  Jason Statham is a bit one-dimensional in the leading role, but he has great on-screen presence and charisma.  I also enjoyed the way Mr. Ritchie’s script attempts to give unexpected psychological dimension to this tough-guy criminal character.  In one of the movie’s most surprising scenes, late in the film, we see Jake have what appears to be a psychological break in an elevator, as the different sides of his mind go to war with one another.  It’s a great sequence.  (I just wish I had a better understanding of what exactly was happening and what new enlightenment Jake attains at the end of it, when he exits the elevator.  I get the sense that this is key to understanding whatever broader psychological message the film is supposed to have, but it didn’t come together for me.)  Macha is another great, slightly unhinged and dangerous Ray Liotta character.  Mr. Liotta has mined this territory before, but he’s so good at it that it’s hard to complain.  Vincent Pastore (Big Pussy on The Sopranos) and André Benjamin (whose I recently quite enjoyed on Dispatches from Elsewhere) are a hoot as Zach and Avi.  I just wish I better understood who their characters were and what they were doing.  (At first I thought there might be a supernatural aspect to their characters, which excited me as a big surprise in a Guy Ritchie film… then, as the story continued, I started to suspect they might be figments of Jake’s imagination… but I am still not sure…)  Mark Strong is spectacular as the quiet, fiercely competent assassin Sorter.

Well, it was fun to give this film another go, though I wish I could report that I thought it was a buried diamond amongst Mr. Ritchie’s filmography…