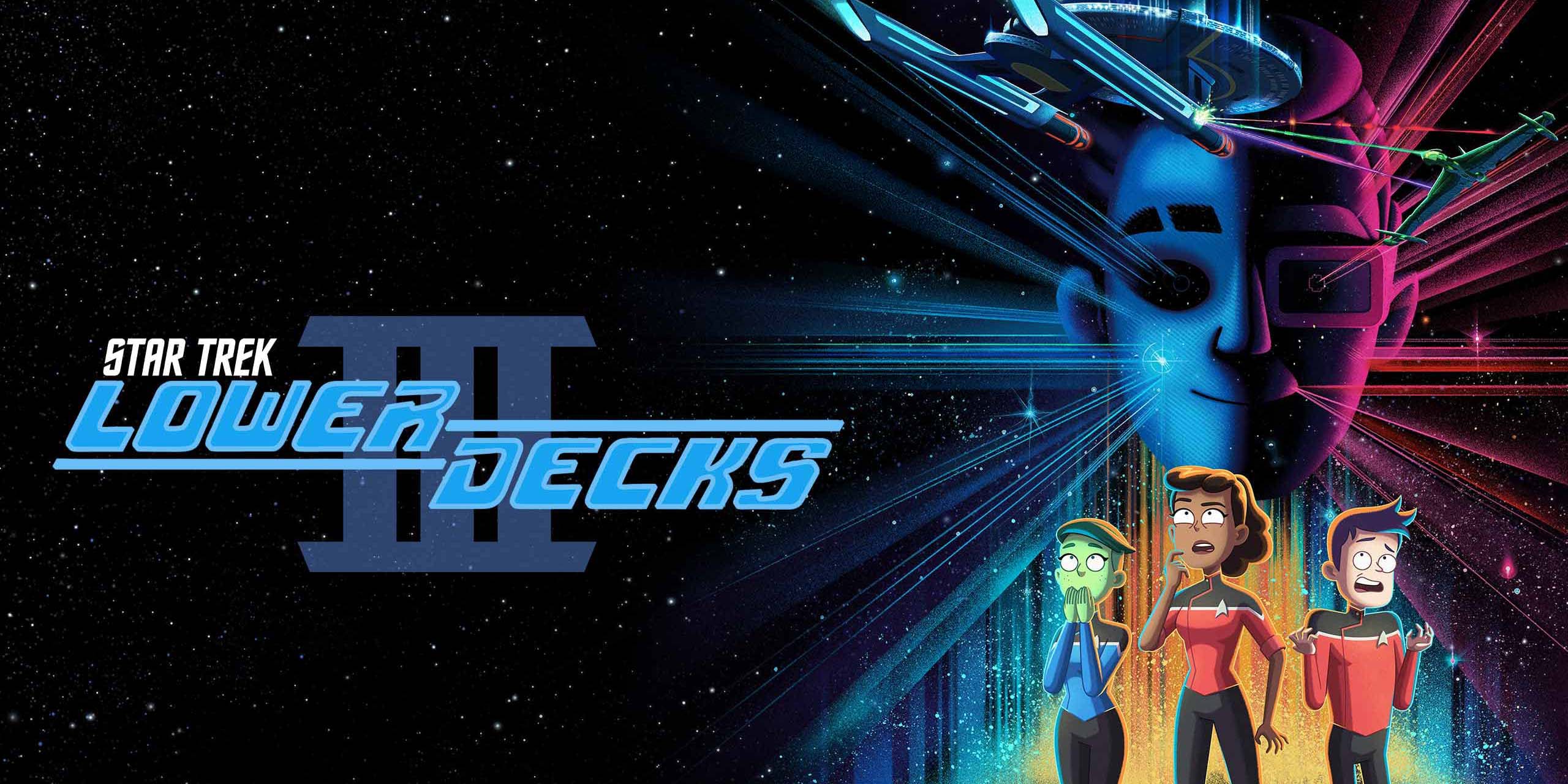 One of the only bright lights for me in (the otherwise pretty much terrible) modern Star Trek has been the delightful animated series Lower Decks.  I quite liked the first season, and I absolutely loved the second season.  I’m so happy that all ten episodes of season three continued to be fantastic!

The show is set during the era of Star Trek: The Next Generation, Deep Space Nine, and Voyager.  It’s an in-continuity show, taking place some time after the final Next Gen movie (the terrible Star Trek: Nemesis).  The show’s attention to detail is incredible, perfectly recreating the look and feel of those 24th century Star Trek shows.  This is not an empty spoof.  It’s a “real” Star Trek show!  But at the same time, it is incredibly funny, absolutely jam-packed with an incredible joke-per-second ratio.  I love how well creator and show-runner Mike McMahan and his team are able to strike that balance!!

Lower Decks is a show made by hard-core Star Trek fans, for hard-core Star Trek fans.  Whereas the other modern Trek shows seem to show an ignorance of (and often even a disdain for) the details of Star Trek continuity, Lower Decks is absolutely seeped in it.  Each episode is overflowing with references to (and jokes about) an array of obscure call-backs to Trek’s vast history.  It tests even my deep knowledge of the minute of Trek!!  I love this about the show!  (Extra props to the series for their incredible poster-art for each season, which so far has been parodying the main poster art for each original Star Trek movie.)

But what makes Lower Decks work is how strong the four main characters are.  At this point in the series, I deeply love and care about Mariner, Boimler, Tendi, and Rutherford, the four young “lower decks” characters on the U.S.S. Ceritos.  It’s a pleasure watching their relationships continue to deepen, and to see them each learn and grow as we follow them on their adventures.  (Tawny Newsome, Jack Quaid, Noël Wells, and Eugene Cordero are fantastic in these roles.)

I’m also pleased by how much I like the Ceritos bridge crew at this point!  They’ve all become well-rounded, interesting supporting characters: Captain Freeman, First Officer Jack Ransom, Security Chief Shax, and Chief Medical Officer T’Ana are, at this point, almost as fun and interesting as our four main “lower decks” characters.  (Considering the bridge crew was my main problem with the show back in season one, I am impressed by this positive development!)

This third season picks up right where the season two finale left off, with Captain Freeman under arrest.  The show subverts expectations in the premiere by not allowing our main “lower decks” characters to have a major role in proving Captain Freeman’s innocence.  That surprised and slightly frustrated me at the time, but in hindsight I love the show’s boldness in sticking to its premise.  There SHOULD be bridge-crew-focused adventures happening “off screen”, in which our “lower decks” characters wouldn’t/shouldn’t be involved!

I was happy to get some major revelations about Rutherford’s past and the secret of his implant in episode five, “Reflections,” as well as in the season finale, “The Stars at Night”.  It was satisfying to finally get some pay-off to these mysteries.

The highlight for the season for me was, of course, episode six “Hear All, Trust Nothing,” which was set at Deep Space Nine!  DS9 is my favorite of all the Trek shows, and it was an absolute delight to get the first on-screen, canonical new DS9 adventure set after the DS9 series finale, “What You Leave Behind.”  I was beyond thrilled that both Nana Visitor and Armin Shimmerman reprised their roles as Kira and Quark!!!  It was pure joy to get to see DS9, and those characters, again.  (And Morn!!)  I loved seeing the classic DS9 locations brought to life in the animated Lower Decks style.  (And it was fun to see the Karemma — from DS9′s “Rules of Acquisition” and “Starship Down” again!)  (I was also thrilled with the extended DS9 reference in episode two, “The Least Dangerous Game”, in which Boimler finds himself hunted like Tosk, from the first-season DS9 episode “Captive Pursuit”!)

This season also brought us some sequels to previous episodes.  I adored episode seven, “A Mathematically Perfect Redemption”, which picked up the story of selfish Exo-Comp “Peanut Hamper” (last seen in the season one finale, “No Small Parts”).  I can’t believe we got a full episode focusing on Peanut Hamper!!!  What a crazy and surprising notion!!  I loved this episode.

I also enjoyed episode eight, “Crisis Point 2: Paradoxus”, which was a sequel to the original “Crisis Point” episode that poked fun at the classic Star Trek movies.  This return to that world was a lot of fun.  (Extra credit to the great joke in which Mariner has to climb over the movie-style “letterbox” bars when she exits the Holodeck.)

The season built to a compelling climax as Admiral Buenamigo’s drone-ship program threatened the very existence of the California class of starships.  It was fun to get to see the Ceritos crew stand-up for their workhorse-like class of small starships, and very satisfying to see the many California-class ships band together to save the day.

Other highlights of the season include:

I love this show.  I wish the seasons were longer than just ten episodes!!  But I’m thankful for what we get.  This is by far the best modern Star Trek show.  It’ll be a long wait until season four next year…!!