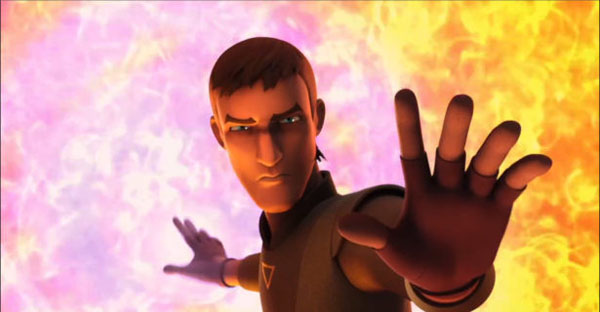 Tonight, Star Wars Rebels will draw to a close with the three-part finale.  I am super-excited, and I am very much hoping that Dave Filoni and his team can draw this story to a proper close.  So far, season four of Star Wars Rebels has been ferociously entertaining, filled with exciting action-adventure, great character work, and a fantastic attention to detail in the way the stories have explored previously unseen corners of the Star Wars universe, while also connecting these stories and these characters more closely to the films, particularly the original Star Wars, whose events take place only a short while after these episodes.

When Rebels first began, I was still smarting over the cancellation of the previous Star Wars animated series, The Clone Wars, before that series could reach its planned conclusion.  (I still hope that, someday, those stories will see the light of day.)  When the new show, Rebels, first began, I was put off by what looked like the show’s more kid-friendly focus, and I wasn’t immediately taken by the new cast of young characters.  That first season was a little shaky, but by season one’s final episodes I could begin to glimpse the show that Rebels would become.  Rebels roared out of the gate at the start of season two, featuring Darth Vader as the main villain and presenting us with perhaps the best canonical on-screen version of the in-his-prime, fully evil Vader that we hadn’t really seen since 1981’s The Empire Strikes Back.  I was also delighted that the show began to reintroduce characters and storylines that had been left hanging by the cancellation of Clone Wars.  Season three expanded and deepened this corner of the Star Wars universe.  I was delighted by the connections to Rogue One (bringing in the character of Saw Gerrera, voiced by Forest Whitaker), and thrilled to see Grand Admiral Thrawn, a memorable character from Timothy Zahn’s Heir to the Empire novels (that helped carry the torch for Star Wars fandom in the post-Return of the Jedi, pre-Prequel years), finally brought to on-screen, canonical life.

Season Four was incredibly enjoyable from start to finish.  It was satisfying to see how far these characters had progressed over the course of these four seasons, and fun to see the skillful way that show-runner Dave Filoni and his team were able to be able to weave back together a variety of story threads that had run through the show since the beginning.

The season kicked off by bringing the story of Sabine’s family and the planet Mandalore, including threads that had begun back in The Clone Wars, to fruition.  The Mandalore stuff hasn’t been my favorite aspect of Rebels, but I was pleased by how well everything came together in this opening two-parter.  It was a surprising thrill to see Bo-Katan return (the character had originally been introduced in The Clone Wars), again voiced by Battlestar Galactica’s Katee Sackhoff.

The next two-parter, “In the Name of the Rebellion,” brought back Saw Gerrera as well as Bail Organa and Mon Mothma, and explored the fractioning of the different Rebel cells prior to the assembling of the Rebel “Alliance” as seen in the Original Trilogy.  This is a clever idea to explore, and it was great to see Saw back on Rebels, though I was disappointed that the show didn’t show us how Saw suffered the terrible injuries we see him with when we catch up to him in Rogue One.  That felt like a big missed opportunity to me.  I did love the way the story developed the idea of the Empire’s top-secret project to construct the Death Star, as well as their use of Khyber Crystals to power the Death Star’s super-weapon.  (I enjoyed all the references this season to Krennic and his project “Stardust.”  I also enjoyed the glimpse of the Empire’s “Death Troopers,” which were introduced in Rogue One!)

Back in season one, I felt Rebels was too bound to the planet Lothal.  It seemed like a cost-saving measure (to continue reusing the same environments, etc.) rather than a creative one, and felt like it kept the show at a very small scale.  I was happy the show expanded onto a much larger canvas in seasons two and three, and so when the characters returned join Lothal in episode five — where they would remain for most of the rest of the show — it felt like a welcome return and a lovely way in which the show came full circle here at the end.

With Thrawn on Rebels, it was super-fun to also see his right-hand man and assassin Rukh, from Timothy Zahn’s novels, brought to life this season.  I was so happy to finally see Rukh on-screen!

This final run of episodes has been spectacular, emotional and complex.  I’ve been so happy to see that so many of the little hints about Lothal and the Force that Mr. Filoni and his team had seeded throughout Rebels were brought back into play.  I’ve loved how enigmatic these final episodes have been, leaning heavily into weirdness and spirituality.  I can’t believe how much time has been spent exploring the Loth-wolves and other mysterious creatures of Lothal, many of which (like the owl that is somehow connected to Ahsoka) have been popping up throughout the run of the show.  This stuff  could easily have been cut from a lesser show, but I adore the way that Mr. Filoni has taken the time here in these final episodes, when every moment of screen-time is critical, to give time to these mystical concepts.  We have gotten some answers to some big questions — such as the fate of Ahsoka after her duel with Vader in the season two finale!! — while Mr. Filoni has also left much to the audience’s imagination.  This is a very difficult needle to thread, giving the audience satisfying answers while also daring to allow some mysteries and complexities to remain for the audience to wonder and dream about.  I love how bold these final episodes have been in this regard.

And how emotionally satisfying.  The decision to kill off Kanan was long-expected — we knew, or at least strongly suspected, that this Jedi Knight was not around during the Original Trilogy — but the way his death played out was heartbreaking.  It was lovely to finally see an on-screen confirmation of his and Hera’s love for one another (something this for-all-ages show had long kept mostly in subtext), and I was glad that Kanan got a heroic send-off.

My mind was blown by the discovery, in the last episode that aired last week, “A World Between Worlds,” of a Jedi Temple hidden somewhere beyond space and time, that is somehow able to access all time at once.  This is a huge leap into new territory for Star Wars, and for our understanding of the Force.  The look of the Temple was striking (I loved the stark black and white, and the designs of all the doors/portals).  The sound-design in this episode — and in the last several episodes — was magnificent, seeding in dialogue from not just all of Rebels but all of the Star Wars movies, including the new films.  There was so much in this episode to take in — I can’t wait to re-watch this episode again, and I suspect this is one that fans will be discussing and debating for many years to come.  (Myself, as much as I loved the concept, I have major questions that the episode did not address — the show did explain why Ezra couldn’t use these gateways to save Kanan — because his death allowed the rest of the Ghost crew to escape, and pulling Kanan out of that moment would have left the Ghost crew to die — but we have seen some huge catastrophes in Star Wars, including the destruction of entire planets and the deaths of billions, so why couldn’t any Jedi use this Temple’s time-travel capabilities to prevent those catastrophes??)  I loved seeing the Emperor involved in this episode (voiced by Ian McDiarmid, who played the Emperor in the movies!).  Of course, the biggest delight was the return of Ahsoka.  I was not expecting to see her again in Rebels.  I am delighted to learn that she is still alive, and I am very curious to see whether she is involved in the finale or not.

I was also delighted by all of the connections to the perplexing Mortis three-parter from season three of The Clone Wars.  Those episodes always hinted at a larger story at play, and so its was super-exciting to see some of those ideas finally returned to here.  I re-watched those episodes this week, after seeing “A World Between Worlds,” and I was delighted to notice still more connections that I hadn’t noticed.  (The letters/symbols seen in the Temple were also seen in the Father’s tower in the Mortis episodes, and in one shot of the constellations on the ceiling of the Father’s tower, I noticed a wolf!  Dave Filoni sure does think long-term!) 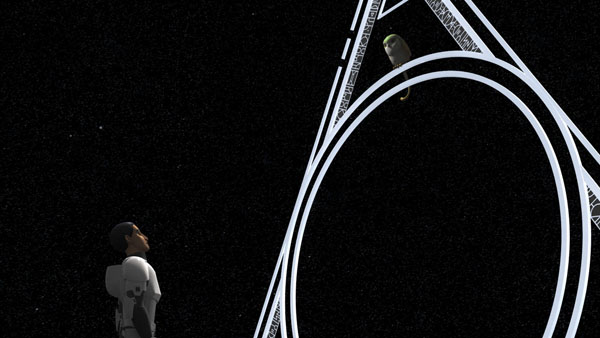 Will tonight’s finale (a three-part episode) bring this series too a satisfying conclusion?  I certainly hope so!  So far, Mr. Filoni and his talented team have not disappointed.  I am excited, and I’ll be back soon with my review of the end of Rebels.