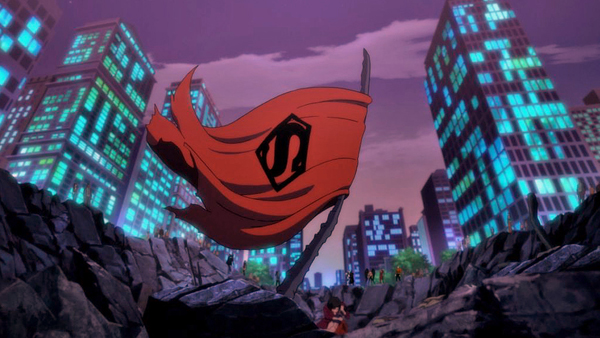 Back in 2007, when DC/Warner Brothers began their series of direct-to-DVD animated films, the first project they tackled was an adaptation of the 1992-93 “Death of Superman” storyline from the comics.  That animated film, Superman: Doomsday, was very entertaining and still stands as one of my favorite of the now thirty-plus DC animated films.  A decade later, DC/Warner Brothers have returned to that well with another adaptation of this famous story-line, this time in an extended two-part film.  So what did I think of the recently-released part one, The Death of Superman?

It’s actually quite good!  I’m pleasantly surprised.  First off, I wasn’t that excited for a second adaptation of this storyline.  The first animated film, as I just mentioned above, was great, and the “Death of Superman” story from the comics is far from my favorite Superman story.  Additionally, this new animated adaptation is set in the “New 52” inspired continuity that has been connecting most of the past several years’ worth of DC’s animated films, and while I love the idea of a continuity between these films, I don’t love many of the creative decisions at the heart of this “New 52” style.  (And, indeed, DC’s 2014 “New 52” relaunch of its comic book universe has, only four years later, already been mostly abandoned.)  So none of this had me exactly chomping at the bit for this new film.

But I’m happy to say, it’s a very entertaining film and a very competently-made adaptation of this storyline.

When this project was first announced, I’d assumed that it would be designed as a more-faithful adaptation of the original source material, as opposed to the first animated adaptation that took a lot of liberties with the story and condensed a year’s worth of plot from across multiple Superman titles into a less-than-ninety minute film.  But, surprisingly, this new adaptation has reconfigured the source material almost as much as the first film did!  First off, as I’d noted above, the story been adjusted to fix into the “New 52” inspired continuity of these recent animated films, which necessitated a number of changes to the story as well as the look of all the characters.  And while a two-part film will surely be able to get into a lot more detail than the original done-in-one animated adaptation, there was still a great deal of condensing that needed to be done to fit this sprawling story into a film.  (Part two looks like it will include a lot more of the “Reign of the Supermen” storyline from the comics, in which various Superman-doppelgangers appeared on the scene following Supey’s death.  Superman: Doomsday skipped all of that, so I’m excited to see part two adapt those stories.  But considering how much longer the “Reign of the Supermen” storyline ran in the original comics, as compared to the actual “Death of Superman” issues, I suspect we’ll see even more condensing of the source material in part two.)

Although the film is set in this “New 52” continuity, there’s a pleasant nostalgia to seeing Dan Turpin and Maggie Sawyer working together, and Bibbo, and hearing references to “Intergang” and other fixtures of the Superman comic-books from the eighties and nineties.  There were lots of moments like that which brought a smile to my face.

As it turns out, this adaptation is a lovely mix of references from across many different iterations of Superman from other the years.  The above-mentioned references connect to John Byrne’s “Man of Steel,” post-Crisis on Infinite Earths era of Superman comics from the eighties and nineties.  The Kryptonian outfits glimpsed in the film remind me of that era as well.  But the look of the rocket ship that brought baby Kal-El to Earth is a pre-Crisis design… while the crystalline look of Kryptonian technology is inspired by Richard Donner’s Superman: The Movie.

The film deviates from the source material in the way it handles the states quo of Lois and Clark’s relationship.  In the film, we pick up their relationship at an interesting point: Lois and Clark are involved together romantically, and yet Lois does not yet know that Superman and Clark Kent are one and the same.  It’s a fascinating place to set their relationship, and I enjoyed the way the film explored how their relationship would proceed from that point.  I appreciated that the film took the time away from the Superman-Doomsday fisticuffs in order to give us these nice character moments.

One positive adjustment from the original source material was the inclusion of the entire Justice League in this film.  It makes sense that the DCU’s A-list heroes would be involved in trying to stop Doomsday’s rampage, and it gives more weight to Supes’ final battle when all the JL have fallen already.  In the original comics, we did see some of the Justice League, but they were the B-listers who made up the League at the time, rather than Batman, Wonder Woman, etc.

The voice cast for the film is strong.  Nathan Fillion as Green Lantern was a standout, as usual.  Mr. Fillion is absolute perfection in the role.  The other returning Justice League voices — Jerry O’Connell as Superman, Rosario Dawson as Wonder Woman, Jason O’Mara as Batman, etc. — were all very solid, again.  Rebecca Romijn (Jerry O’Connell’s real-life wife!) was terrific, joining the team to voice Lois Lane.  (I wouldn’t have thought that Ms. Romijn was right for Lois, but she did a great job.)  I was a little less taken with Rainn Wilson (The Office) as Lex Luther.  That was a bold choice, and I do love Mr. Wilson, but I didn’t think he was right for Lex.  Mr. Wilson’s nasally, high-pitched Lex reminded me of Jesse Eisenberg’s Lex from Batman v. Superman: Dawn of Justice, and that’s not a good thing.

* I liked that characters who will be important in the “Reign of the Supermen” second half of this story, such as John Henry Irons and Hank Henshaw, were incorporated into this first half.  That was a positive adjustment from the original comics.  I quite liked the tragic origin given to Hank Henshaw.

* Another change I liked?  Making Cat Grant African-American.  It’s great to add some non-white characters into the Superman mythos.

* I liked the gag with Lex wearing a big red beard as a disguise — a fun in-joke reference to the character of Lex Luther Jr. from the comics of the “Death of Superman” era.

* I also liked the “you’ve got me, who’s got you?” line, referencing Superman: The Movie.

My many complaints about this “New 52” continuity of animated films, which I have expressed previously in prior reviews, still stand.  What persists as the biggest problem for me is that I truly don’t like for the bulky, awkward-looking character designs they are using.  Clark/Superman is the worst — just look at the weird shape of his head!  I long for the gorgeously sleek, simple designs of Superman/Batman/etc. from the Bruce Timm era.  (The Timm-Inspired designs from Superman: Doomsday are also far superior to what we see here.)

But beyond that, I am pleasantly surprised by how much I enjoyed this new film!  I think it’s a fun watch for both in-the-know super-fans and newbies alike.  I am eager for part two…!