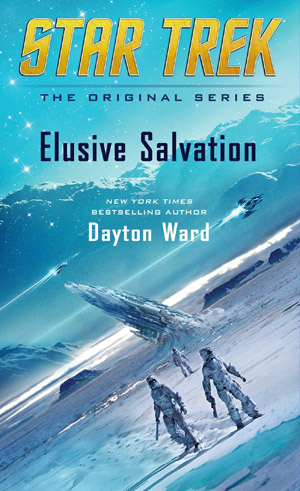 I loved Dayton Ward’s 2013 Star Trek novel From History’s Shadow.  That novel took several characters and references from across the many different Star Trek series to aliens having been on Earth in the years between 1947 and 1968 and wove them together into a wonderful story about this secret history of the Star Trek universe.  It was brilliant.

And so I was eager to read Elusive Salvation, Mr. Ward’s 2016 follow-up.

Elusive Salvation is a wonderful book, but despite the back cover’s declaring that the novel would be “an all-new adventure from history’s shadow!”, it is not the sequel to From History’s Shadow that it was billed to be.

In fact, it’s not really a sequel at all.  I had expected that this novel would follow the further adventures of the human Captain Wainwright and the Vulcan Mestral (characters from the DS9 episode “Little Green Men” and the Enterprise episode “Carbon Creek,” respectively) and Allison Marshall and the other main characters of From History’s Shadow, but that did not prove to be the case.  I was surprised and disappointed that Wainwright and Marshall barely appear in Elusive Salvation. (Wainwright in two short chapters, Marshall not at all.)

Elusive Salvation is a sequel to From History’s Shadow only in that it’s a similar type of story, one that tells parallel narratives of aliens on Earth in the past with a connected adventure of Kirk and the Enterprise in the future.

In this book, we follow a group of aliens who, fleeing their persecutors, crash on Earth in 1845 in the Arctic Circle.  These long-lived aliens live for decades in secret on Earth, and we follow their progress over the years, seeing how they are able to successfully avoid being noticed both by the native human beings and also their alien oppressors who continue to pursue them.  Centuries later, Captain Kirk encounters representatives of this same alien race, the Iramahl, who have at last thrown off the shackles of their oppressors, the Ptaen, and who believe that a secret critical to their race’s survival has been hidden on Earth.

I wrote in my review of From History’s Shadow that I loved how that book, along with Greg Cox’s Eugenics Wars novels, had continued to utilize and develop Roberta Lincoln, the woman played by Teri Garr from the Original Series episode “Assignment: Earth.”  I was happy that Roberta appeared again in this novel.  I love seeing more of this character and learning more about her and Gary Seven’s mysterious employers, the Aegis (named by Howard Weinstein in his story for DC Comics’ Star Trek comic book series from the eighties and nineties).

Once again, this novel is, for the most part, in line with what Greg Cox established about Gary Seven and Roberta Lincoln’s goings-on on Earth in the decades following the events of “Assignment: Earth,” as well as what Christopher L. Bennett established of the Department of Temporal Investigations and Kirk/Spock’s many adventures through time in his two DTI novels.  But Elusive Savation seems to paint a different picture for Kirk’s status following the events of Star Trek: The Motion Picture than Mr. Bennett’s Forgotten History did.  Forgotten History seemed to corroborate the popular fan notion that Kirk and the Enterprise went out on another five year mission (if not an even longer voyage of exploration) following TMP and before Kirk wound up desk-bound as seen in Star Trek II.  But while this book doesn’t come right out an say it, the events set in 2283, two years before Star Trek II, seem to suggest that Kirk has been a desk-bound admiral for a long, long time already, while McCoy has taken another assignment (on Jupiter Station) and Spock is already overseeing cadets at Starfleet Academy.  There’s nothing wrong with this approach, and it does fit in well with where we see the characters when Star Trek II begins.  But since there are a lot of great books and comics that depict Kirk and the Enterprise’s adventures after the five year mission and before the events of Star Trek II-III-IV, I’ve always felt that the original Enterprise did go on another multi-year mission of exploration with Kirk at the helm, before Kirk took a desk job and the Enterprise became a ship used to train cadets.

Speaking of which, Elusive Salvation’s Kirk-era portion of the story, set two years before Star Trek II, features Kirk and Spock taking an Enterprise crewed by (mostly) cadets out on a mission, which I guess was meant to set up that similar situation in Star Trek II, but which instead felt weirdly repetitive and inconsistent to me.  In Star Trek II, Kirk seemed uncomfortable taking out a ship of cadets on a real mission, rather than being used to it as I’d expect him to be if this had happened before.  The book also has Kirk Spock time travel back to 1985, which similarly feels like it was meant to echo Star Trek IV, but again feels weird to me because why would Kirk and co. be so off-balance in 1986 (as they so humorously were in Star Trek IV) if they had just recently time-traveled to that same era?  These are surprising inconsistencies in a book that is all about playing with the details of Star Trek history (and so one that I would expect to be very attentive to canonical Trek history).

* I loved the chapter with Guinan in San Francisco in the 1800’s (which playfully references what we saw of Guinan with Mark Twain in Earth’s past in the TNG two-parter “Time’s Arrow”).

* I didn’t love how many times Wainwright got his brian erased in From History’s Shadow, often by people who should have/could have been allies in his quest, and I was doubly bummed that, in his two brief appearances here, he gets his brain wiped again, not once but TWICE.  I didn’t like seeing this happen again and again to a character who I liked, and who I was rooting for to learn the truth about the events going on around him, and it also seemed like needlessly repetitive story-telling.  I was at first happy to see Wainwright reunited wth the Vulcan Mestral, whose fate was left unknown by Wainwrght in From History’s Shadow despite their many years working together.  (This felt like a dangling story thread in From History’s Shadow that I was surprised was left unresolved.)  But then that too was wiped from Wainwright’s brain in this book!  Aargh!  I grew to love this character in From History’s Shadow and didn’t like seeing him treated this way.  (Also, as I mentioned, continually erasing his memories felt to me like an easy, overused way to prevent him from knowing too much at that point in Earth’s history.)

* That being said, I was surprised the book’s events showed us that many people in the American government, beyond the tight circle seen in From History’s Shadow, knew about extraterrestrials on Earth, all the way up to the Joint Chief of Staff in 1985.  I suppose that makes some logical sense, that all of the goings-on in these two books couldn’t be kept a secret forever.  But on the other hand, if the American leadership and others knew about the existence of aliens, wouldn’t that have led to other ripple events/actions that would have changed our “real-world” history?

* I enjoyed the development of two new alien races, the Iramahl and the Ptaen.  Mr. Ward did a nice job in creating these new alien races and fleshing them out in this book.

* I could have done without the sort of silly reference to Section 31 in the final chapter.  I loved the Section 31 stories in Deep Space Nine, but I think the organization has been overused since then, popping up centuries earlier on Enterprise and even in the J.J.-verse in Star Trek Into Darkness.  I didn’t need it here, too.

* On the other hand, I loved how we saw, in the book’s penultimate chapter, that Roberta Lincoln was aware of Kirk & co.’s return to the 20th century in Star Trek IV.  That’s a great idea that makes perfect sense.  In fact, I’d have loved for that chapter to have gone on further and actually shown us to what degree Ms. Lincoln might have been involved, behind the scenes, in those events.  That would make a great story to tell someday!

While Elusive Salvation wasn’t exactly the sequel to From History’s Shadow that I’d hoped it would be, it was still a terrific book, and I am eager to move on and read Mr. Ward’s third book in this series, Hearts and Minds.  I will be back soon with my thoughts on that one.