Skip to the content
HomeWritten PostJosh Reviews the First Episode of The Mandalorian! 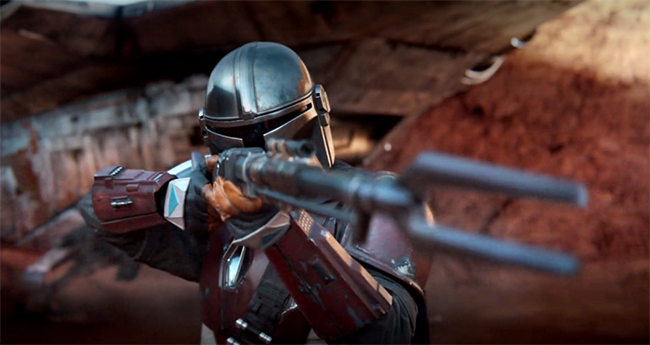 Josh Reviews the First Episode of The Mandalorian!

It’s here!  Disney+ has launched and the very first Star Wars live-action TV show has arrived: The Mandalorian.  Two talented craftsmen are at the helm: this first episode was written by Jon Favreau, who created the series, and it was directed by Dave Filoni.  Many Star Wars fans know that we’ve already been shown that Star Wars can succeed as a TV show, and that’s mostly due to the talents of Mr. Filoni, who oversaw both Star Wars: The Clone Wars and Star Wars: Rebels, two wonderful animated series that have done a spectacular job of expanding the canvas of Star Wars, telling new stories that feel completely of a part with the universe that George Lucas created.  That is no easy task, and Mr. Filoni and Mr. Favreau have accomplished that very feat here with The Mandalorian.  I don’t know where this series is going, but I was continually delighted by this first episode, and I can’t wait to see what’s next.

What struck me most about this first episode is how absolutely gorgeous it looked.  Mr. Filoni’s direction, combined with scene after scene of truly spectacular visual effects work, is breathtaking. This first episode gives us a widescreen, big-budget feel.  This isn’t some cheap-looking version of Star Wars, a poor TV imitation of what we’ve gotten to see on the big screen.  If anything, this first episode was even MORE spectacular than the films!  The visuals are enhanced by the show’s comfortable pace, which allows us to live in the quiet moments of these characters moving through this world (moments in which the fast-paced films would generally not allow us to linger).

The show gives me exactly what I want in a new Star Wars adventure (in whatever the medium might be — film or TV), what I’d mentioned right in the first paragraph.  I want a new story with new characters, new settings, and new situations… that also feels like it fits into the established universe that I love so much.  The Mandalorian beautifully threads this needle.  There is so much gorgeous imagery in this first episode!  There are so many beautiful new alien landscapes!  I am already dreaming about many of them, eager to learn more.  And there are so many wonderful aliens!  We see many familiar Star Wars species (more on that below) and many new creatures, all of whom are beautifully realized.  I have no idea what was CGI and what was prosthetics and what was makeup and what was puppetry.  The series brilliantly blends these many techniques to create a feast of new alien characters who just feel REAL, which of course is the most important thing.

This first episode is chock-full of little references and nods that will thrill and delight Star Wars fans.  These aren’t obvious jokes or references.  No one quotes famous lines from the films.  No, these are deep-cut references that, in each case, show us just a little more of this universe than we’d seen before, which is exactly what I want.  I grinned ear to ear when I saw that the alien using a flute-thing to hail vehicles for the Mandalorian early in the episode was the same type of alien who informed on Luke, Ben, and Han to the Imperials in Mis Eisley in the original Star Wars!  (I loved hearing his bizarre speech again!!)  There were so many additional moments of delight: when I saw that Ugnaught rancher… and when I saw that “Gonk” Droid… and when I saw another droid eyeball-on-a-stick guarding a door (just like in Jabba’s palace)… and when I saw that in one of the alien markets the Mandalorian passes through, they’re apparently roasting and eating Salcious Crumb type creatures!!  (Salacious Crumb was the laughing alien perched on Jabba the Hutt’s shoulder in Return of the Jedi.)  And when a doomed character mentions “Life Day” (a deep-cut nod to the Star Wars Holiday Special), I could not have been happier!!

Of course, the series’ main reference to Star Wars lore is its titular character.  The unnamed Mandalorian bounty hunter who we follow through this episode is a fascinating new creation about whom I am eager to learn more.  At first glance, this Mandalorian looks a lot like Boba Fett, one of the most famous side-characters from the Original Trilogy.  This is obviously intentional, and a way to interest fans who always wanted to know more about that mysterious bounty hunter.  But when I first heard about this show, I had the opposite reaction.  It felt lame to me to try to capitalize on fans’ love of Boba Fett by creating another Boba Fett-Like character.  (I almost said a “Boba Fett clone,” but since Attack of the Clones showed us that Fett actually IS a clone, I thought it best not to go there…)  I am pleased that by the end of this first episode, the show had already done a great job of establishing that this Mandalorian is very different from Boba Fett — and this despite his never taking off his mask, and speaking very little dialogue.  I’m interested to see if we ever actually see this character’s face!  For now, I’m impressed at how well Pedro Pascal (Oberyn Martell from Game of Thrones) was able to bring this character to life, using his physicality to give this Mandalorian personality and style despite the elaborate costume — the armor and the mask.

Mr. Favreau and Mr. Filoni have assembled a wonderful array of actors to fill out this universe.  The great director Werner Herzog is wonderfully creepy and ominous as the man who hires the Mandalorian for his major job in this episode.  I love his voice so much!!  My favorite character in the episode was the Ugnaut rancher who helps the Mandalorian learn to ride.  He’s voiced by Nick Nolte, who brings a warmth to the character even while he is stoic and gruff.  I love the moment in which the Ugnaught references the once-proud Mandalorian lineage to which our Mandalorian main character belongs.  And I could listen to him say “I have spoken” all day long!  Also amazing: Mythrol (I had to look up his name online), the jovial, fast-talking, gill-faced bounty who the Mandalorian captures at the start of the episode.  He’s played by Horatio Sanz (SNL), who absolutely kills it in this role!  I wish this dude was a regular character on the show!  I was sorry to see him get frozen in Carbonite.  Taika Waititi voices the droid bounty hunter IG-11.  We saw a similar droid, IG-88, in The Empire Strikes Back.  But he didn’t do much there.  After decades of imagining what this type of droid might be capable of, not is awesome to see this dorid in action here!  I love the way he moves!  And, of course, Taika Waititi’s voice is just perfect; allowing the droid’s dry line delivery to be very funny!  Carl Weathers is fun in his one scene, as the fixer connecting the Mandalorian with bounties.  I hope we see more of him.  I am also intrigued to learn more about the doctor in the company of Werner Herzog’s character (played by Omid Abtahi, who I recognized from his memorable work on American Gods).  I also smiled to see comedian Brian Posehn playing a speeder-driver!

OK, I’m going to now dig a little deeper into this episode, so please beware SPOILERS ahead…!

The series is set after Return of the Jedi and years before The Force Awakens.  The episode is vague on where exactly we are in the timeline.  We know the Empire has fallen (the Mandalorian isn’t interested in accepting Imperial credits as payment), but little else.  (It’s interesting to see that the Stormtroopers in the room with Werner Herzog’s character aren’t wearing the crisp white armor we’re used to seeing — these Stormtroopers have seen some wear and tear, and with the Empire gone, new Stormtrooper armor is probably hard to come by.)  I’m curious to see to what degree this show explores the state of the galaxy during this era.

I was intrigued by the scene, in the middle of the episode, in which the Mandalorian visits a secret lair which seems to be some sort of den for his Mandalorian “tribe”!  This scene raised so many questions about who these people are; their background and their goals.  I am excited by this world-building, and can’t wait to see more of this in future episodes.

I also enjoyed the way this episode explored the workings of a bounty hunter’s life, and the “guild” to which the Mandalorian bounty hunter belongs.  I loved seeing the little details, like the “pucks” on which holographic images of wanted people/aliens are encoded.

* I sat up when we saw those ears in silhouette at the end!!  What a wild twist to glimpse a baby of Yoda’s never-named species!!!  I am intrigued!!

* I’m also very interested to see where the show winds up taking our Mandalorian main character.  In early scenes, he seems to be as immoral and take-no-prisoners as Boba Fett.  But the scene with his fellow Mandalorians hints that there is more to this bounty hunter than meets the eye.  And he makes an interesting choice to shoot IG-11 at the end, before that droid can kill the baby Yoda creature.  That doesn’t necessarily make this Mandalorian a hero, but it shows that he’s not necessarily a villain, either.  I am excited to see where this all goes.

* Speaking of which, I’m bummed the droid bounty hunter IG-11 got shot in the head at the end!  I’d hoped to see more of him!  (He’s a droid, so maybe that damage can be repaired?)

* It’s an awesome reveal to see all the bounties frozen in Carbonite on the Mandalorian’s ship.  However, the continuity nerd in me remembers that freezing Han in Carbonite was a new idea of Darth Vader’s in The Empire Strikes Back — this wasn’t standard bounty hunter procedure for Mandalorians.  I guess I can imagine that this technique has caught on since then…

* Is Werner Herzog’s Imperial character mockingly wearing one of the Rebel Alliance’s medals (as seen at the end of the original Star Wars) around his neck??  That is amazing.

All right, I am hooked!!  I loved this first episode of The Mandalorian, and I can’t wait for more…!