Skip to the content
HomeWritten PostJosh Reviews The King of Comedy 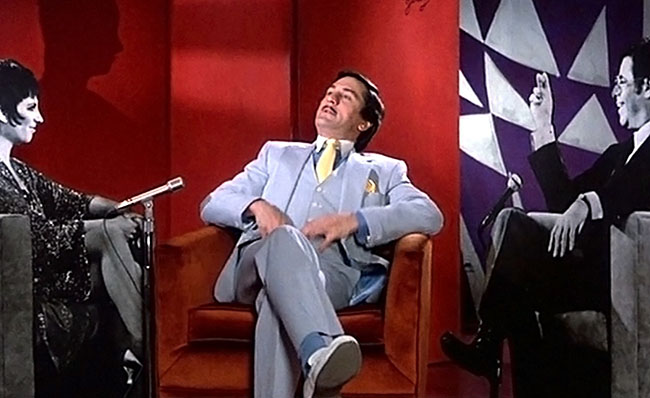 Josh Reviews The King of Comedy

Recently, as part of my preparation for the new Joker film, I re-watched Martin Scorsese’s 1983 film The King of Comedy.  In the film, Robert De Niro stars as Rupert Pupkin, a wannabee comedian who becomes obsessed with the famous late-night talk-show host Jerry Langford (Jerry Lewis).  After an encounter with Mr. Langford, Rupert begins to dream that the two are good friends and comedic peers.  When he is rejected from appearing on Jerry’s TV show, Rupert and a fellow Jerry-obsessed young woman, Masha (Sandra Bernhard), concoct a plan to kidnap Jerry.

Rewatching this film, what struck me most was how much this film reminded me of the comedies of awkwardness that would become so popular several decades later, comedies such as Ricky Gervais’ The Office (and, to a somewhat lesser extend, the American version as well).  The King of Comedy is often wrenchingly painful to watch, as we endure witnessing Rupert’s increasingly awkward encounters with the people he encounters.  (The sequence in which Rupert and the woman he sees as his true love, Rita, arrive unannounced at Jerry’s house and refuse to leave is a masterpiece of social awkwardness.)  It’s fascinating how much this film presaged a major movement in comedy that would arrive quite a few years afterwards.

Mr. Scorsese and Mr. De Niro have collaborated to depict several examples of dangerous, damaged men.  Travis Bickle from Taxi Driver is probably their most famous example, but I found Rupert Pupkin to be as scary and unnerving as Travis.  Rupert presents a little more normally — though, really, is his wearing a white linen suit outfit on all occasions any less bizarre than Travis’ angry young man gear?  Rupert certainly presents a more jovial facade.  But from the first time Rupert appears on screen, it was clear that this man is a bomb waiting to go off.  This depiction of a lonely young man, someone who is socially awkward and without much regular human contact (friends, family), someone who believes he is “owed” more than what he actually has in life, as a powder keg waiting to blow is frightening familiar and potent when viewed in today’s world.  I think we’re far more aware of the existence and danger of this sort of toxic male figure than we were back in 1983.  So here is another way in which the film feels remarkably prescient and ahead of its time.

Jerry Lewis is perfectly cast as Jerry Langford, the object of Rupert (and Masha)’s longing and obsession.  He’s perfectly believable as this famous comedian.  His entire persona plays into this role; almost no acting is required.  Who better than Jerry Lewis to depict this character who we see affected by his fame and life in the public eye?  (Apparently, the very funny scene in which a woman who spots Jerry on the street expresses her love for him, and then wishes horrible things upon him when he won’t agree to get on the phone to speak with her daughter, was based on a real experience that Mr. Lewis had!)  But Mr. Lewis demonstrates that he is a very skilled actor.  He dials back the schtick to show us a very real person behind Jerry.  We see how Jerry is different when he’s alone in his home, versus when he’s interacting with a fan on the street, versus when he’s on camera on his show.  It’s fascinating to see Jerry turn his charm on and off as he moves in and out of the spotlight.  The film’s exploration of the down-sides of fame, and of how fandom can turn toxic, is yet another example of how prescient the film feels, and how relevant it is when viewed today!

I love the many times in which the film drifts into Rupert’s fantasy world, showing us scenes that exist only in Rupert’s head, of his being a great success and a close personal friend and colleague of Jerry’s.  I love how playful the film is with the narrative, allowing the film itself to often be an unreliable narrative, showing us the world from Rupert’s (deranged) viewpoint.

Sandra Bernhard has never been better than she is here, in the role of the deranged stalker Masha.  Ms. Bernhard creates a viscerally memorable portrait of a disturbed young woman who has become unhealthily focused on one famous person, Jerry.  Her role here feels like the perfect use of her talents; her rapid-paced speech, her unpredictability, her intensity.  As scary as Rupert can be, Masha is even more frightening — a live-wire always on the verge of some dangerous, unexpected act.  Her scenes alone with a tied-up Jerry, late in the film, in which Masha imagines that the two are on a romantic date, are spectacularly unnerving, and it’s all because of how Ms. Bernhard owns the screen in those scenes.  It’s impressive.

Speaking of unnerving, we come to the film’s ending.  What was positioned as a character study that would end in tragedy shifts, in the final minutes, into presenting the film as a biting social satire that — and forgive me for repeating myself here — would prove to be strikingly prescient.  (SPOILERS for a three-decade-old film ahead here, gang, so beware.)  In those final minutes, the film jumps ahead to a few years later, after Rupert has been released from prison.  He is greeted by the media and the public with acclaim and popularity, and all his dreams of fame on TV come true!  Despite his lack of any actual talent, and despite his crimes — actually, BECAUSE of them — Rupert achieves the fame he so craved!  What a staggering commentary on our celebrity-obsessed society!  What an impressive prediction of today’s world in which fame seems, in so many cases, to be entirely divorced from an actual talent or contribution.  It’s a gut-punch of an ending that I suspect might be even more powerful today than it was in 1983.

(It’s interesting to me, also, how this film’s ending parallels the ending of Taxi Driver.  In that film, too, the psychopath we’ve been following is, in the end, celebrated by the mainstream media.  It’s fascinating to see how this concern over the media’s ability to twist reality has run through Mr. Scorsese’s films.  In my blog about Taxi Driver, I suggested that perhaps the final scene of the film took place all inside Travis’ head.  That possibility also exists here in The King of Comedy — a film that has already repeatedly presented scenes that were not reality but rather the fantasies of Rupert…!)

The King of Comedy is such a successful evocation of awkwardness and uncomfortability that I found it very difficult to watch.  I can understand why the film didn’t succeed at the box office upon its release, and it’s not a film I am in any rush to revisit.  But none of that means it’s not a masterpiece.