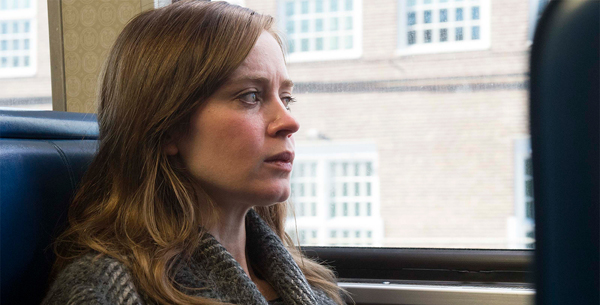 Josh Reviews The Girl on the Train

Adapted from the Paula Hawkins novel of the same name, The Girl on the Train tells the story of Rachel Watson (Emily Blunt), a divorced alcoholic.  Every day Rachel rides the train to and from New York City, and she has become obsessed with the couple living in a house that she sees every day from her train window during the trip.  To her, this couple represents a perfect, happy relationship, of the type that Rachel longs for.  But one day, Rachel sees the woman kissing another man.  This drives Rachel even deeper into depression, and later that night, after getting completely drunk, Rachel decides to confront the cheating woman.  The next morning she wakes up with no memory of what occurred, but there is blood on her shirt and head, and the woman, Megan, is reported missing.

I haven’t read the original novel, so I can only judge The Girl on the Train as a movie.

As a movie, there is a lot about it that works.  Emily Blunt is magnificent in the lead role, and for much of the film I was quite hooked into the mystery of what had transpired.  Unfortunately, I was able to figure it out far earlier than the movie wanted me to, and as the pieces came together I was bummed that there were so many coincidences that, for me, weakened the answers that the film provided as to what had gone down.

I have been a fan of Emily Blunt’s ever since her small role in Charlie Wilson’s War.  She’s been spectacular in film after film since then.  I didn’t love The Devil Wears Prada, but she was terrific in it and very memorable.  She was great in The Adjustment Bureau with Matt Damon, and she was the best thing about Lynn Shelton’s awkward indie Your Sister’s Sister.  She was perfection in the very funny, and very under-rated, The Five-Year Engagement with Jason Segal, a rare comedy role for her.  She kicked a lot of ass and was riveting in the sci-fi films Looper with Bruce Willis & Joseph Gordon-Levitt and Edge of Tomorrow with Tom Cruise, and although I was one of the few people who seemed to not have loved Sicario, I was for sure head over heels in love with Ms. Blunt’s leading performance.

She is once again spectacular here in The Girl on the Train as Rachel.  Ms. Blunt completely embodies this mess of a character, keeping the audience thoroughly hooked into her performance even as she, and the film, don’t shy away from depicting many of Rachel’s terrible actions.  This is a character who has been terrible to others and to herself, who you think is at rock bottom and yet who seems to continually find ways to sink ever deeper.  Rachel could be a completely off-putting character, but Ms. Blunt’s performance is so powerful that she carries the film on the back of her performance.  It’s quite remarkable.

(As an aside, I was very impressed by how well Ms. Blunt’s performance and Tate Taylor (The Help)’s direction combined so skillfully to depict Rachel’s drunkenness.  Being drunk is something extremely hard to convey on-screen, and yet Ms. Blunt and Mr. Taylor nail it.  There’s a moment early on in which an African-American woman and her young baby sit down next to Rachel on the train, and as soon as Ms. Blunt spoke a single line it was immediately clear, from the perfect way she delivered the line, that Rachel was drunk.  As the film progresses, the inventive camera-work and editing (by Michael McCusker & Andrew Buckland) wonderfully puts us right in the disoriented head-space of Rachel’s drunkenness.  This is terrific work, and critical to the film.)

Justin Theroux is great as Rachel’s ex-husband Tom.  Mr. Theroux is a comedy master (Tropic Thunder, Your Highness, Wanderlust) but he’s equally skilled at drama, which he once again demonstrates here. (One of these days I’m going to have to listen to my brother and find time to watch Mr. Theroux in The Leftovers.)  Rebecca Ferguson made a huge impression in Mission: Impossible — Rogue Nation, and she is terrific — and unrecognizable — here as Tom’s new wife Anna.  Seriously, I had no idea this was the same actress until I looked at the credits after seeing the film.  That’s how impressively Ms. Ferguson creates an entirely different character here.  The brittle Anna is nothing like Mission: Impossible’s Ilsa Faust.  The beautiful Haley Bennett is getting a lot of press for her dual roles this year in this film and in The Magnificent Seven.  I haven’t seen The Magnificent Seven, but she’s certainly terrific here as Megan.  Megan is a character who is idealized by those around here — we see her intentionally play to that in terms of her interactions with her hunky psychiatrist Dr. Abdic (Edgar Ramirez), and of course she has no knowledge of the idealized fantasy version of her that Rachel has built up in her head.  That makes her a tricky character to play, as Ms. Bennett’s performance needs to allow for various characters, and the audience, to read different things into her and to imagine different things about her.  Ms. Bennett finds this balance skillfully.  Luke Evans (Bard from The Hobbit films) plays Megan’s also-hunky husband, Scott Hipwell, who Rachel winds up befriending under false pretenses as she starts looking into what happened to Megan.  Allison Janney plays Detective Sgt. Riley, who is (somewhat slowly) looking into Megan’s disappearance.

This is a killer cast, and the film works as well as it does because of the way each of these wonderful actors inhabits these characters and breathes life into them.  Because the movie is so centered in Rachel’s head and her perspective, we don’t actually get to know a whole heck of a lot about what’s really going on inside any of these other characters (except, ultimately, Megan), and so the film relies on the skill and charisma of these performers to inhabit these characters and make them feel like real people.

I respect the film for its guts in allowing its lead character, Rachel, to be so messed up and unlikable.  This wouldn’t be notable if the lead character was a man, but for a story centered on a female lead character this still feels like fairly new ground.  For much of its run-time, The Girl on the Train feels like a noir with a female lead, as we watch a messed-up, deeply flawed character try to do good but only seem to further unravel her own life and the lives of those around her.  I really liked that.

I’m going to enter spoiler territory here, now, so if you haven’t seen the film (or at least read the book), you might want to check out here before I dive into some problems I had with the film’s story.

OK, where the film falls apart to me is the way the story is so woven-through with coincidences.  First of all, the house that Rachel sees from the train and becomes obsessed with seemed, in the initial set-up, to be a completely random house.  But then we learn that this house is actually two doors down from where Rachel used to live with Tom?  AND that the beautiful woman who lives in this house is actually Tom and Anna’s former nanny?  Those are already WAY too many coincidences for me.  Rather than setting up this house as a random house, I think the film should have leaned into the coincidences/connections between these characters.  What do I mean?  Well, rather than it being a coincidence that Rachel has become obsessed with her ex-husband’s former nanny (with whom, it turns out, he was having an affair!), set it up that Rachel KNOWS that the woman who lives in that house is Tom’s former nanny, and that’s WHY Rachel is obsessed with her, because Megan has the regular contact with Tom, and Tom’s baby daughter, that Rachel no longer has.  Wouldn’t that make a lot more sense?

By the way, I was very confused at first when we learned that the house that Rachel was obsessed with was two doors down from where she used to live, because as the movie is set up it feels like this is a house that Rachel sees in the middle of her train ride, not two seconds after it started.  (My wife, who’s read the book, told me that in the book we learn that Rachel now doesn’t live near her old house, so that sort of explains how her old street is now somewhat into her train ride, but the movie didn’t really explain that.)

Unfortunately for my enjoyment of the movie, as I mentioned earlier, I figured out that Tom was the villain way too early.  It was just too obvious that Dr. Abdic and Scott were being set up by the film as somewhat shady characters, so those characters seemed to me to clearly be red herrings.  So who else could the villain be?  It had to be Tom or Anna.  And as soon as we learned that Megan was pregnant but that neither Scott nor Dr. Abdic were the father, I knew the villain had to be Tom.  There were no other male characters in the film who it could be!  (I knew it wouldn’t just be someone random.)  So that knocked the wind out of the sails of the film’s reveal, for me.

I was also somewhat surprised by the degree to which the film’s ending seemed to let Rachel off the hook for her actions.  I had been so impressed, to that point, by the way the film had bravely depicted a thoroughly broken and messed-up lead character.  (I was particularly struck by the flashback to Rachel’s threatening Tom with a bludgeon of some sort, and smashing a mirror while he cowers on the floor — what a switch of the usual male/female dynamic!)  But then we learn that Tom has apparently been lying to Rachel and making up all of those bad things that we and she thought she did.  It turns out that it was TOM smashing the mirror and threatening Rachel who was on the floor, not the other way around.  While it was a chilling reveal when Rachel discovered this (in a great scene with Lisa Kudrow, who was terrific in this small cameo), once I thought about it I found that I didn’t like learning that Rachel hadn’t done that bad stuff.  This would have been a stronger story had Rachel actually BEEN that broken and fucked-up of a woman, who then still somehow had to crawl back and put her life back together.  Making her, in the end, just an innocent victim weakened the story for me.

The film is very well-directed and well put-together.  It looks gorgeous, and director Tate Taylor is able to sustain the tension throughout the film.

This isn’t really my kind of movie, but I enjoyed seeing The Girl on the Train.  For me, the reason to see this film is to enjoy Emily Blunt’s magnificent lead performance.  She, and the rest of the terrific ensemble, elevate what turns out in the end to be a fairly ho-hum story.