Skip to the content
HomeMovie ReviewsJosh Reviews The Godfather Coda: The Death of Michael Corleone 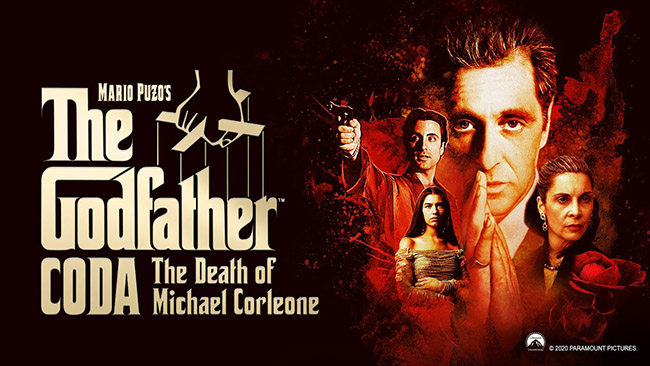 Josh Reviews The Godfather Coda: The Death of Michael Corleone

I adore the first two Godfather movies.  They’re certainly on my list of my ten favorite movies.  It’s hard to say which one I like better; they’re both masterpieces.  I’ve never hated The Godfather Part III.  A sequel made so long after the original films is always a difficult task.  Part III is certainly far weaker than the first two films, but being weaker than two of the greatest movies of all time is not a sin.  I’ve always said that if The Godfather Part III had a different title and the characters had different names — if it was an original crime drama film not connected to the original Godfather films — that it would be much better thought of.  I’ve been intrigued that in recent years Francis Ford Coppola has been revisiting and tweaking many of his films.  There’s the recent “Final Cut” of Apocalypse Now, as well as his completely reworked version of The Cotton Club (now titled The Cotton Club: Encore, which has been sitting on my to-watch shelf for a while; I really need to get to that!).  When I heard that Mr. Coppola would be going back in and making adjustments to the third Godfather film, I was intrigued to see what he would do with that film!

First off, this new version of The Godfather Part III has been retitled The Godfather Coda: The Death of Michael Corleone.  I recall watching interviews with Mr. Coppola a decade or two ago (perhaps on the special features of The Godfather trilogy’s original DVD or blu-ray release) in which he said that his original intention had been to call the film The Death of Michael Corleone, but the studio mandated the Part III title, and that he did not at the time have enough power to insist on his preferred title.  So it’s fun to see Mr. Coppola finally get his original title restored.

The Godfather Coda: The Death of Michael Corleone is still, at its essence, the same film that The Godfather Part III always was.  How could it not be?  But I was delighted by the many adjustments Mr. Coppola has made to the film.  There’s no question in my mind that this is a superior version of the film.  It’s essential viewing for any fans of this series.

Some SPOILERS ahead as I dive into this new version.

There are some weaknesses baked into this film that no re-edit can address.  The absence of Robert Duvall’s Tom Hagen hurts the film.  (Mr. Duvall declined to participate in the film, apparently due to a salary dispute.)  The Romeo and Juliet doomed love story between Mary (Sophia Coppola) and Vincent (Andy Garcia) is not as strong as it should be.  The banking story involving the Church is not as gripping as the more personal, street-level stories found in the first two films; it’s just a little too complicated, and a little too cold.

(As an aside — I mentioned the Mary and Vincent love story, and I want to be clear that I am not a hater of either Ms. Coppola or Mr. Garcia.  In particular, I think the criticism Ms. Coppola received for her performance in the film is entirely unwarranted. I think she’s lovely in the film.  And I did care about Mary & Vincent’s love story.  But this story just doesn’t have the weight it needed to carry the film.  Both Ms. Coppola and Mr. Garcia do fine work, but neither of them can compare to the heavy-weights from the original films: Al Pacino, Marlon Brando, Robert De Niro, Robert Duvall, Diane Keaton, James Caan, etc.  And I think that there was almost no way that a love story between two young, completely new-to-the-series characters could fail to be something of a let-down to fans of the original two films.)

That all being said, Mr. Coppola’s edits do a lot to strengthen the film; they take a movie that I think was already very good and make it even better.

This is not a director’s cut in which a lot of cut footage has been restored, to flesh out the story.  Quite the contrary, this edit is about ten minutes shorter than the original film.  This is still a long movie (157 minutes), but the editing tightens up the pace considerably, making the film flow much better than the longer, original version.

The two most significant changes come at the beginning and end of the movie.  Mr. Coppola has excised the film’s original opening, in which Michael writes a letter to his estranged children, and then we see Michael’s papal order induction ceremony.  Instead, the film now opens with a longer version of the scene that used to appear about 30-40 minutes into the movie, in which Archbishop Gilday asks Michael for help handling the Vatican Bank’s massive deficit, and Michael offers to trade his financial support for the Vatican’s approval for him to become the major shareholder of an international real-estate company called Immobiliare.  I love that this scene now feels like an echo of the famous opening scene of the first Godfather, in which Michael’s father Vito also heard a petition from someone looking for help that only Don Corleone could give.  It’s also helpful to set up this Immobiliare story right away, as this is the central narrative spine of the film, in that Michael believes that this is finally the way to leave the gangster life behind him and for the Corleone family to become completely legitimate.  Finally, watching this version it’s clear that seeing the actual ceremony at the church was not needed, because the extended party sequence that follows it (another delightful echo of the structure of the first Godfather film) does everything needed to set up the film’s cast of characters.  So I loved this change.

The second most important change comes at the end.  Intriguingly, although this film is now explicitly called The Death of Michael Corleone, Mr. Coppola has removed the actual moment of Michael’s death.  This might seem like a counter-intuitive change, but I loved it.  First off, that shot of Michael falling out of his chair was always sort of goofy.  More importantly, this new ending emphasizes that the film’s story represents Michael’s spiritual death.  The loss of Mary (and what we can imagine is the subsequent complete estrangement from his surviving family members like Kay and Anthony) was the spiritual death of Michael Corleone, and that’s what the story is really about.  So this ending, in my opinion, clarifies that important point.

There are lots of other small changes here and there.  Many scenes have been adjusted and shortened.  For the most part, I didn’t miss any of the changes and thought these were all strong edits that improved the overall pacing of the film.

There are two exceptions: I miss the moment in which Michael, alone with the coffin of his mentor and ally Don Tommassino, asks “Why was I so feared and you so loved?”  I loved that scene as it really emphasizes Michael’s core internal struggle.  I also missed seeing, at the very end, after we flash back to Michael and Mary’s dancing, the additional flashback shots of Michael dancing with Apollonia and with Kay.  I liked how those shots tied the whole saga together.  I guess they’re not necessary, but I liked them.

Bravo to Mr. Coppola and his collaborators on this new edit of The Godfather Part III.  I’m delighted that Mr. Coppola was able to have the opportunity to go back into this film and make these adjustments that some time and distance (and no need to battle with the studio) gave him.  This version will without question be my preferred version of this film to watch moving forward.  I highly recommend this version to all fans of The Godfather films.