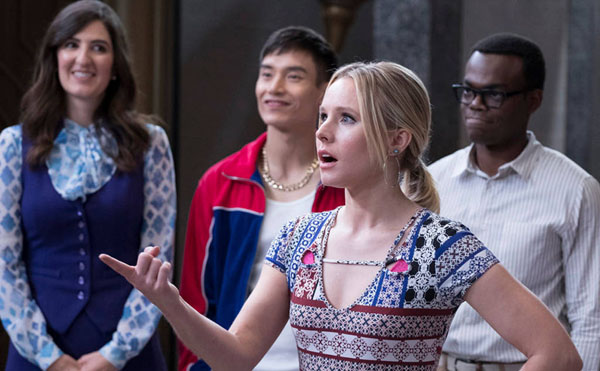 I didn’t watch the first season of The Good Place last year.  But when season two began in the fall, I wondered, why am I not watching this new show by Mike Schur, who has been behind so many other great shows that I have loved (particularly Parks and Recreation)??  So I went back and started streaming season one, and I immediately fell in love with this wonderful comedic creation.  I tore through season one and loved every minute.  That first season’s delicious twist ending was fantastic, and made me so happy that I wouldn’t have to wait a year before watching season two!  I am pleased that the second season was just as fantastic as that first year.  The Good Place is easily one of my very favorite shows currently on TV.

So much of season one was structured to build up to that wonderful twist at the end of the year.  And so I had to wonder, would the new season be able to top that?  What would the show look like now that we knew the truth behind the situation that Eleanor (Kristen Bell), Chidi (William Jackson Harper), Tahani (Jameela Jamil), and Jason (Manny Jacinto) had found themselves in?

This post-twist season two could have easily felt like a let-down, but the miracle of what Mr. Schur and his collaborators have created here is that, post-twist, this second season wound up feeling even more fun and crazy than ever before!  This season burnt through plot like few shows I have ever seen — in this respect, it reminded me of Breaking Bad in its prime.  Eleanor and co. figured out what was up with Michael’s “reboot” of the Good Place by the end of the two-part season premiere, while the second episode (the best episode of the season — it made my “Best TV of 2017” list) burnt through hundreds of years of in-show continuity!!  While season one was a slow burn building up to that end-of-the-year twist, season two was a fast-paced roller-coaster, in which the show completely transformed itself almost every single episode.

That amazing second episode, “Dance Dance Resolution,” showed just how daring and inventive Mr. Schur and his writers were capable of being. I think it was that episode, even more than Michael’s laugh at the end of season one, that sealed my love for this show.

The main ensemble continued to be just as fantastic in season one as they were in season two.  Ted Danson continues to prove how effortlessly incredible he is.  This man is a master of the sitcom form.  He allows Michael to be both villainous and empathetic, and oh-so funny.  It’s fantastic work.  Michael has already shot up towards the top of my list of Mr. Danson’s great TV performances, and Mr. Danson has given a LOT of incredible TV performances!  The other main standout for me this season was, again, D’Arcy Carden as Janet, the near-omnipotent guide to The Good Place.  Not only does Ms. Carden continue to chart Janet’s journey towards sentience (a heavy sci-fi idea seamlessly blended with this light comedy), but I loved how we got to see her play various different versions of Janet this year: more of the Bad Place Janet, glitchy Janet, and my favorite: Good Place Janet impersonating a Bad Place Janet.  Fantastic.  Ms. Carden is the show’s secret comedic weapon.  Perhaps not-so-secret any more, after two years of her stealing every scene she is in!!  (No surprise, the “Janet and Michael” episode that explored Janet & Michael’s shared history, beginning with the moment when Michael first stole a Good Place Janet to help with his secret project, was one of my favorite episodes this season.)

The fantastic main ensemble has been ably supported by a widening array of guest stars.  Marc Evan Jackson returned from season one as Shawn, Michael’s boss in the Bad Place, and his deadpan charm was once again hilarious.  (Mr. Jackson has also been killing it recently in his role as Captain Holt’s husband Kevin on Brooklyn Nine-Nine, another show created by Mike Schur!)  Jason Mantzoukas (who ALSO has a recurring role on Brooklyn Nine-Nine!) was very funny as Derek, an artificial “rebound guy” with wind-chimes for genitals that Janet creates to get over Jason (who, in Michael’s reboots, has forgotten that he had a relationship with her in the first iteration of The Good Place).  At the end of the season, the great Maya Rudolph appeared as a divine Judge before whom Eleanor & friends must plead their case and, as always, Ms. Rudolph was a commanding comedic presence.  Her jovial cluelessness was delightful — I hope we see more of her character in season three!

* At only thirteen episodes in length (twelve if you could the two-part premiere as only one episode), this season zipped by an an incredible pace.  It was over so quickly!!  These short-season runs allow for a higher per-episode quality (a traditional 22-24 episode-season generally has a few duds), but still, I wish there was more of this show!!

* Just as season one was, this season was highly serialized, though Mr. Schur and co. managed to achieve what many modern serialized shows fail to do, in that they are still able to create distinct episodes with a strong beginning-middle-end.

* I was intrigued that the season also continued season one’s pattern of beginning each episode with a chapter number.  As the show continues, I imagine this could be an obstacle to the show’s obtaining new viewers (who would want to watch a show that opens with “chapter twenty-four”??), so I applaud Mr. Schur & co.’s boldness in sticking with this idea.

* The finale was a fascinating new style of episode for the show.  Of course, I was interested by the umpteenth up-ending of the premise, this time re-setting the story to be about Eleanor & co. being given another chance on Earth to see if they could better themselves.  It was also interesting to see the show focus almost exclusively on Eleanor in this episode.  I missed the rest of the cast, which was the biggest weakness of the episode for me.  Still, I think Mr. Schur and co. made the right choice in focusing in on Eleanor’s story, as trying to show what all four of the gang were up to wouldn’t have meant we’d only get a superficial glimpse at each of them.  I wonder how long season three will stick with this premise.  Will we get individual spotlight episodes at the start of season three, focusing in on Chidi, Tahani, and Jason?  Or by the time that third episode rolls around will the show have already shifted to another premise?  I have no idea, and I love that.

* Another highlight of the finale?  Getting to see Ted Danson’s Michael channel Sam Malone and tend bar in a sweet scene with Kristen Bell’s Eleanor.  What TV fan didn’t grin in pleasure getting to watch Ted Danson behind a bar, cleaning a glass with a towel slung over his shoulder?  Not a sight I ever thought to see again.  Wonderful.

* Much has been written about the incredible manner in which Mike Schur and his collaborators have created a very funny show that is all about philosophy and moral dilemmas.  But what the season two finale solidified for me is another unsung aspect of the show — that this show can be so funny and still embody seemingly hokey ideas like hope and the inherent goodness inside of every human being.  This has been a thread running throughout the series, and the finale crystalized that for me.  What an incredible shift it was to move from Michael’s evil laugh at the end of season one, to his sweet, satisfied, hopeful smile here at the end of season two (as he and Janet looked at the ticker-tape to see that, perhaps, his bar-tender speech to Eleanor has given her the nudge she needed to be the good person Michael knows she can be).

If you’re not watching The Good Place — well, I hope you haven’t ready this far because I’d hate to have spoiled any of this show’s fantastic surprises.  But if you have read this far and you haven’t started watching The Good Place, trust me, go and check it out.  You’ll be able to speed through these first two short seasons in no time, and I promise you won’t be disappointed.  Then you can start counting the days until season three comes next year, just like the rest of us.

As Michael says in the final moment of season two: “Okay.  Here we go.”