Skip to the content
HomeWritten PostJosh Reviews A Wrinkle in Time 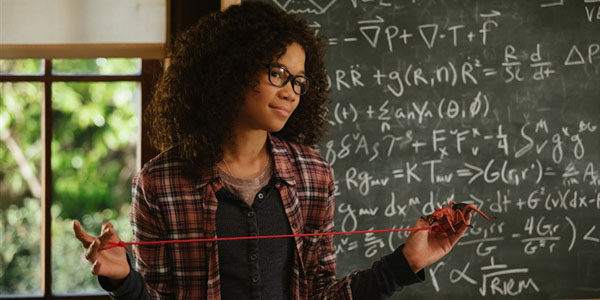 Josh Reviews A Wrinkle in Time

I loved A Wrinkle in Time when I was a kid.  I remember I had a set of the three (at the time) books in the series by Madeleine L’Engle: A Wrinkle in Time, A Wind in the Door, and A Swiftly Tilting Planet.  As I recall, I didn’t much care for A Swiftly Tilting Planet, but the mix of science and fantasy in those first two books thrilled me.  Just recently I read A Wrinkle in Time with my daughters, and they loved it.  It was fun to rediscover the book through their eyes.  They deeply invested in Meg and in her adventure.  For me, I was pleased that the book (which I hadn’t read in close to three decades) held up well.  There were some religious aspects in the novel that I hadn’t recalled and which I found superfluous, and I was a little frustrated by the novel’s abrupt ending, but I was glad to revisit this book and happy that my daughters enjoyed it just as I had.

The book felt ripe for a visual interpretation, and so I looked forward eagerly to Ava DuVernay (Selma)’s film adaptation.  Having now seen it, I can say that the film is… interesting.  There’s a lot to enjoy, but overall I found it to be a bit of a mixed bag.

First off, it’s not what I’d consider a direct adaptation of the book.  Yes, the movie follows the same basic story beats as the book, but whereas, say, the Harry Potter films attempted to bring the story of the novels to screen as faithfully as possible (understanding that, of course, changes have to be made when transforming a novel into a two-hour movie), there were many places in Ms. DuVernay’s adaptation of A  Wrinkle in Time in which it felt to me that Ms. DuVernay and her team used the novel as a jumping-off point for their own ideas.  There’s nothing inherently wrong with that approach.  But the result is a film that feels very distinctly like one filmmaker’s version of a story loosely based on A Wrinkle in Time rather than a faithful adaptation.  (I freely admit that, for most of cinema’s history, that’s what practically ALL movie adaptations of novels were!  But in a post-Harry Potter era, when we have seen how successful those films were, both creatively and financially, I find myself more drawn to projects that are faithful to the source material.)

As an example of what I am talking about, take the film’s depiction of Mrs. Whatsit, and Mrs. Who, and Mrs. Which.  Ms. DuVernay has cast three wonderful actresses in the role (Reese Witherspoon, Mindy Kaling, and Oprah Winfrey), and given them each a wonderfully distinct look.  But these characters — so central to the book and the film — don’t really look or act much anything like how they were depicted in the book.  The characters in the book were used as a jumping-off point for the filmmakers to bring in many of their own visual and performance ideas to create these three characters for the movie.  For the most part, I enjoyed these three characters (though the decision to make Oprah’s Mrs. Which spend much of the movie as tall as a house separated her from the other characters visually in a way that didn’t always work), but surely we can all agree that this was not a faithful depiction of the characters from the book?

The film’s greatest strength is its cast, most particularly the young lead, Storm Reid.  Ms. Reid plays Meg, the heroine of the story, and she is absolutely fantastic.  I think it’s terrific that Ms. DuVernay chose to cast a young woman of color as Meg, but that act would be meaningless if the actress chosen wasn’t any good.  Ms. Reid, thankfully, is tremendous.  She’s perfect as Meg.  She conveys Meg’s intelligence and her bravery, but also her fears and insecurities.  Meg’s “faults” are a major story-point in the novel, and I was pleased to see that translated to the film as well.  Meg’s embracing of her faults, and learning to love herself as a complete person with strengths and weaknesses is a central message of this story, and Ms. Reid was able to sell every moment of that.  There were some visual choices in the film I didn’t love, and some visual effects moments that don’t quite work, but Ms. Reid anchors the story throughout, capturing the audience’s attention.  No matter what sort of visual effects situation is going on around her, Ms. Reid plays ever scene with complete honesty and believability, and that make the audience believe in the story as well.

I was also impressed with the even younger actor Deric McCabe, who plays Meg’s younger brother Charles Wallace.  Mr. McCabe is dynamite, bringing an intensity to his performance that surprised and impressed me.  I couldn’t believe how heavily the film was able to lean on his performance, particularly in the third act in which Charles Wallace, under the control off the evil “It,” basically becomes the film’s central villain.  This is great work.  I have read several reviews be highly critical of the work of Levi Miller, who plays Meg’s friend Calvin O’Keefe, but I thought he was solid.  Not as strong as Storm Reid or Deric McCabe, maybe, but I thought he was just fine and had nice chemistry with Ms. Reid.  I’m not sure why so many reviewers have been picking on him.

Chris Pine (Star Trek) was heavily featured in the film’s trailers, and he’s great as Meg’s missing father Dr. Alexander Murray, though thankfully the film doesn’t shift too much focus to him.  This remains Meg’s story.  Mr. Pine’s skill allows us to understand Dr. Murray’s complete story arc in just a few scenes.  It’s very strong work.  Michael Peña is terrific as always as the Man with the Red Eyes, and Zach Galifianakis strikes a nice balance between goofy and sweet as the “Happy Medium” (though both my daughters and I didn’t see any reason why this female character in the books had to be switched to male in the movie).  Gugu Mbatha-Raw has impressed me a lot recently with strong work in Black Mirror and The Cloverfield Paradox, and like Chris Pine she does great work in just a few scenes as Meg’s mom, Dr. Kate Murray.  I was also very pleased to see André Holland (Moonlight) pop up as Principal Jenkins.  Mr. Holland plays Mr. Jenkins far more sympathetically that he was portrayed in the book, but it worked.  (If they go forward and adapt A Wind in the Door, it’d be fun to see Mr. Holland step into a more central role in that sequel!)

As I have alluded to, there were moments where I thought the visual effects in the film were extraordinary, and also moments that for me fell flat.  I enjoyed the look of the planet Uriel, and the sentient flowers were a nice touch.  I liked the way the Black Thing creeping across space was depicted.  One of the most memorable sequences in the novel is when Meg, Charles Wallace and Calvin visit the planet Camazotz and encounter seemingly perfect suburbia filled with identical housewives and identical perfect children bouncing their balls in sync.  That sequence was beautifully brought to life in the film, almost exactly as I had always imagined it.

On the other hand, some of the film’s choices didn’t work for me.  Many of the characters and settings — most notably the three M’s, and Zach Galifianakis’ Happy Medium — just seemed bizarre-looking for the sole purpose of being bizarre-looking, rather than feeling like part of a unified, well-designed universe.

I can understand the filmmaker’s desire to make Camazotz the source of the evil spreading across the universe, rather than just one planet in the shadow of that spreading evil as in the novel.  This gives the film a more concrete conclusion when Meg is able to defeat the “It” on Camazotz.  And, while my daughters were disappointed, I can understand why Aunt Beast was not included in the film.  (Those creature effects would probably have been difficult and expensive, and at that point the film needed to move forward to its conclusion rather than having a long digression on Aunt Beast’s planet.)  (This reminds me of the Lord of the Rings fans who still complain — wrongly, I might add — about Peter Jackson’s choice to excise Tom Bombadil from his adaptation of The Fellowship of the Ring!)

But I felt the film made a major misstep in showing that synchronized suburb as just one illusion the Man with Red Eyes, and the It that was controlling him, used to try to seduce the Murray kids.  In the book, the whole point of the evil on Camazotz is that everyone there has given up free choice for the false safety blanket of having someone else make all their decisions.  It’s a powerful statement about the danger of conformity, and the importance of individualism and independent thinking.  But in the movie, when the kids pass through that suburban setting, it vanishes, thus implying that it wasn’t really the people of Camazotz, it was just an illusion.  The film then cuts to a beach in which we see lots of people, all dressed in their own individual outfits and doing their own thing.  This is just another way the Man with Red Eyes is attempting to convince the kids that life on Camazotz is great.  But this muddies the water of what exactly is happening on Camazotz (since no one who we see is apparently real, we have no idea what the actual situation is for anyone on the planet), and reduces the villain to a mind-controlling monster, while losing the book’s message of non-conformity.  I was surprised and disappointed by this choice, as I can’t see any reason for it.

The film adaptation of A Wrinkle in Time isn’t bad.  There’s a lot to enjoy, and certainly kids will love it and still find a lot to chew on.  But this is far from a definitive film version of this great story, and I suspect that in a few years this movie will not be well-remembered.  We’ll see…