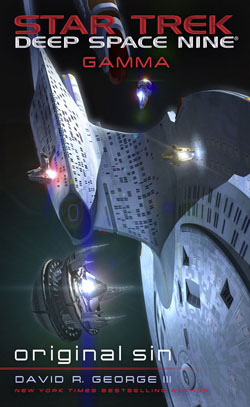 For the last several years, David R. George III has been the author primarily responsible for continuing the Star Trek: Deep Space Nine story in Pocket Books’ continuing series of novels.  Mr. George has crafted a thrilling series of books that, read together, form a fantastic, rich saga that explores interstellar politics and personal drama in the classic Deep Space Nine fashion.

Mr. George’s latest Deep Space Nine novel, Original Sin, follows Captain Benjamin Sisko and the crew of the U.S.S. Robinson on their mission of exploration in the Gamma Quadrant.  In previous novels, we’d seen that Sisko had taken a position as captain of the Galaxy-class Robinson, and , with his wife Kassidy and their daughter Rebecca on board, had set off with the crew of the Robinson on an extended mission of exploration.  But three months into their mission in the Gamma Quadrant, the Robinson is disabled by a group of mysterious aliens, who kidnap nearly a hundred of the children on board, including Rebecca.  As the frantic parents on board seek to recover their missing children, Ben and Kassidy are forced to wonder whether these events connect to the time, years earlier, when Rebecca was kidnapped by a religious fanatic on Bajor…

This novel’s title, Original Sin, is preceded by another title: Gamma. I wonder if the idea is for Gamma to be the title of a continuing series?  I would love to see future Deep Space Nine: Gamma novels that continue to follow the adventures of Captain Sisko and the crew of the Robinson as they explore the Gamma Quadrant.  We’ll see if that comes to pass!

While I liked the idea of telling an all-new adventure of exploration, I was surprised and delighted to see that a significant chunk of this novel was set several years in the past of the Trek novels’ current continuity, telling the story of the kidnapping of Rebecca Sisko by an Ohalavaru zealot on Bajor.

Quite a number of years ago, now, after a fantastic initial run of novels set after the events of the series finale of Deep Space Nine, the book series hit a dry spell for a while.  Some sort of behind the scenes problem led to a lengthy delay between the release of new novels.  Meanwhile, following the success of the DS9 relaunch books, Pocket Books began a Next Gen relaunch series, set after the events of Star Trek: Nemesis.  That initial run of Next Gen novels culminated in David Mack’s fantastic Destiny trilogy of novels, depicting the Borg’s final, full-scale assault on the Alpha Quadrant.  Destiny featured characters from all of the 24th-century-set Trek shows: Next Gen, DS9, and Voyager.  That trilogy of novels shook up the status quo of all the Trek series, and subsequent novels in this continuing continuity were set after the events of Destiny. But that left a multi-year gap in the DS9 series, since when last we’d left the DS9 books, their story was still several years behind the events of Destiny.

For a long time I despaired that we’d ever return to those missing years, but I was delighted that Mr. George’s recent duology Sacraments of Fire and Ascendance filled in many of the gaps. One major story was left untold, though: the much-referenced kidnapping of Rebecca Sisko, the daughter of Ben Sisko and Kassidy Yates.  This event had been referred to repeatedly over the course of the last several years’ worth of Deep Space Nine novels, but that particular story had never actually been told.

Until now!  I am so happy that Mr. George was not willing to let that story remain untold. In Original Sin, he has found a clever way to parallel that story set in the past with a new situation, set in the book-series’ current continuity, in which the Rebecca and nearly 100 other children from the starship Robinson are kidnapped by mysterious aliens in the Gamma Quadrant.  This is a clever way to move the story forward while also filling in this important piece of backstory.

I loved the sections of the book that depicted the events surrounding Rebecca Sisko’s kidnapping on Bajor.  It was fascinating to see some dots finally connected as we at last see that event, along with the Ohalavaru’s first time causing trouble on Bajor’s moon of Endalla, as well as how Jasmine Tey came to look after Rebecca.

I quite enjoyed the rest of the book as well, which was set on board the Robinson in the Gamma Quadrant.  I was pleased to see the novel introduce an entirely-new alien race.  The sequence in which they are able to disable and board the Robinson was tense, and I enjoyed reading how Mr. George depicted this never-before-seen use of technology and strategy.  It’s fun seeing something entirely new like this.

In both story-lines, it was nice to see the character of Rebecca fleshed out a little more than she had been in the past.  Over the course of many recent DS9 novels, Rebecca has been treated something like Mulder and Scully’s baby William was in the final seasons of the X-Files: a somewhat mysterious child, sought after by many for reasons unknown, who just might have some sort of superpowers.  I’ve been enjoying the mystery, but it was nice to see Mr. George move her story forward here in this book.  I am eager to see what comes next.

Also — I have to compliment the fantastic cover by Doug Drexler, featuring the Robinson beset by a number of alien vessels.  These Pocket Books Trek novels have had a number of phenomenal covers over the past several years, and this is a stand-out.

If I have any complaint about the novel, it’s that I felt the resolution was a little rushed.  I was surprised that Jasmine Tey wound up being relatively passive in the ultimate events that brought Rebecca’s kidnapping on Bajor to a conclusion.  And I was surprised that Captain Sisko was not able to reach any sort of understanding with the Gamma Quadrant aliens.  In Star Trek, this sort of story of aliens at odds tends to be resolved by our heroes being able to reach some sort of peaceful reconciliation with their adversaries, but that didn’t happen here.  On the one hand, I am happy the novel’s ending wasn’t predictable.  On the other hand, having read this book soon after watching the first season of Star Trek Discovery, which often didn’t feel like it captured the ideals and values that are a central part of Star Trek, I missed seeing that sort of classic Trek style ending here in this book.

I thoroughly enjoyed Original Sin.  It’s a pleasure to follow these stories that have continued to spin out of Deep Space Nine, my favorite of all the Trek series.  Mr. George has proven himself a phenomenal steward of these storylines and these characters.  I hope that he will write many more DS9 books in the not-too-distant future.