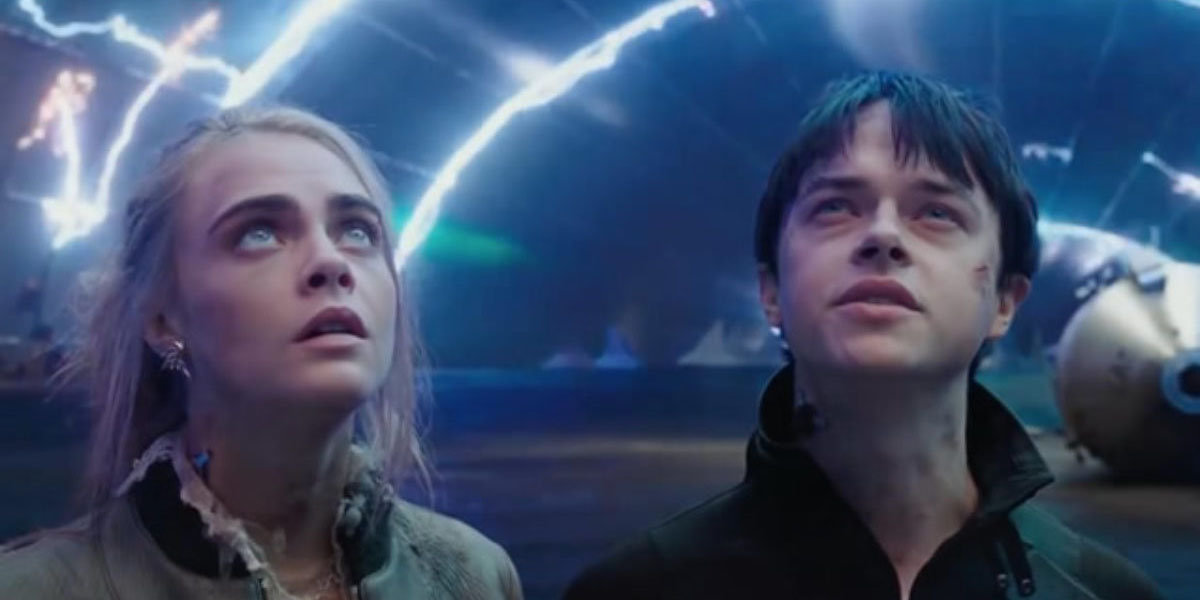 Josh Reviews Valerian and the City of a Thousand Planets

Luc Besson’s 2017 film Valerian and the City of a Thousand Planets is adapted from the French comic book series Valérian and Laureline, written by Pierre Christin and illustrated by Jean-Claude Mézières.  The film is set in the 28th century, and depicts the heroic space adventurers Valerian (Dane DeHaan) and Laureline (Cara Delevingne).  When the film opens, we witness the tragic decimation of a peaceful, idyllic alien world by the wreckage of a massive space battle taking place above their planet.  Valerian mysteriously dreams of the destruction of those aliens, known as the “Pearls”.  The demise of their race and planet somehow connects to his and Laureline’s mission: to infiltrate a massive alien multi-dimensional market and rescue a Pearls’ “converter”, a relic from their now-destroyed planet.  This also seems to somehow connect to the mysterious radioactive menace at the heart of the massive “City of a Thousand Planets”, an ancient, sprawling space-station that serves as home to representatives from a thousand different alien species.

The first three minutes of the movie are phenomenal.  It’s a delightful mini-movie, a nearly wordless piece of utopian speculative fiction set to David Bowie’s song Space Oddity that set my Star Trek loving heart to sing.  It was amazing, and unquestionably (and unfortunately) by far the best part of the movie.

That was followed by another sequence that was also very lovely and intriguing.  We are introduced to the gorgeous and utopian home world of the Pearls.  We see its gentle beauty… and then its horrific destruction.  This sequence, which is also mostly wordless (apart from some alien dialogue), is intriguing and absolutely stunning in its beauty.  I loved the design of the aliens and their world.  The visual effects that realized this sequence are top of the line.

Then the movie cuts to Valerian and Laureline on their ship… and once Valerian starts to speak, the spell is broken.  We’re immediately forced to endure lame banter about his and Laureline’s relationship.  My eyes rolled… and I’m afraid the movie never got much better from there.

It’s a shame, because as a sci-fi spectacle, Valerian and the City of a Thousand Planets is absolutely jaw-droppingly tremendous.  Almost every frame of this film appears to be some form of visual effects shot.  The imagination and inventiveness on display is phenomenal.  The film is stuffed to overflowing with incredible alien creatures and environments.  There’s a joy and craziness to the look of the film that I loved.  This isn’t a grim “realistic” vision of the future — this is a colorful, imaginative, fun-filled vision of weird and weirder creatures and vistas.  I loved that about the film, and I was constantly impressed by the skill of Luc Besson and his team in bringing all of this inventiveness to life.  There are some wonderful practical effects — lots of incredible costumes and sets and prosthetics and make-up effects — that made me so happy to see in a modern day film.  There’s also a ton of cutting-edge CGI effects, beautiful envelope-pushing stuff that make the film feel very modern and exciting.

I wish this was all in service to a story that made a lick of sense… or characters who were interesting and three-dimensional!

Unfortunately, I felt about this film pretty much the same way I felt about Mr. Besson’s 1997 sci-fi film The Fifth Element: that it was a lot of incredible visual effects work and imagination in service of a story that didn’t make sense and characters that I didn’t care about.  I wish I could report otherwise, but that’s how I felt.

Let’s take the first adventure that Valerian and Laureline go on in the film, their mission and chase through a multi-dimensional alien market.  There are a lot of cool ideas to be found here, and the visual effects are stunning.  But the sequence isn’t effective, because the film doesn’t bother to tell us much of anything about what’s going on.  I’m all for getting thrown into an action sequence without a lot of exposition — many films use that sort of device very effectively!  But the film has to then allow the audience to discover what we need to know.  Here, I never felt I understood who our heroes are, who they work for, and what they’re trying to accomplish.  (Are Valerian and Laureline some sort of space cops?  Are they a part of an army or some sort of military force?  Do they have authority over the soldiers they meet up with when they get to the market?)  Similarly, I desperately wanted to know more about how the market works; that would have made the chase scene more gripping.  Where are the aliens that Valerian sees and interacts with when he dons his special glasses?  Are they on another planet?  Another dimension?  We see that patrons of the market have to put objects they purchased through some sort of device when they leave, in order to take their objects with them back into their dimension.  But if that’s the case, how could the case carrying the “converter” that Valerian was carrying be exchanged between him and the other-dimensional aliens when they’re both inside the market?  How could the aliens’ weaponry hurt Valerian when he’s in a different dimension from them?  None of that made sense to me, and so I found myself sort of checked out of the action scene instead of being sucked in the way I wanted to be.

This was a problem for me throughout the film.  When Valerian and Laureline arrive at the space station called the City of a Thousand Planets, I was confused: had they ever been there before?  Valerian calls it “home sweet home” and whatever space or military agency they seem to work for clearly has a presence there… but they (and the audience) also sit and listen to exposition from the ship’s computer about the place, so that felt like it was new to them.  So I didn’t understand if this was Valerian and Laureline’s home base or a place they were visiting for the first time.  (This feels like important information for the audience to have.)

For some reason, the movie stops in the middle for a lengthy Rihanna burlesque number.  It’s certainly a memorable sequence.  Rihanna is a magnificent physical performer; her dancing is great and the outlandish costume changes are wild.  (The visual effects that morph between Rihanna’s different looks are terrific.)  But I was bored, because I had no idea what Valerian was doing in this brothel and why he needed this alien woman!!  (We later figure out that Valerian needs a shapeshifter, but I think that’s information we should have been given earlier.  Then I as an audience member would have understood what Valerian was doing and better felt the ticking clock tension that Valerian was continually getting delayed on his mission.)

Dane DeHaan is unquestionably a great actor.  I loved him in Chronicle.  And he’s gotten a lot of big movie-star roles in recent years (in films such as The Amazing Spider-Man 2 and A Cure for Wellness).  But I felt he was totally miscast as Valerian.  The role called for a swashbuckling hero.  I didn’t feel Mr. DeHaan had the energy or charisma the role needed; he was too quiet, too internal.  (That could be a great choice for an action star, but in this big loud superficial film it felt like the wrong approach.)  Mr. DeHaan isn’t helped at all by the script, which gives his character a ton of adventure/plotty things to do, but too little character development and too much uninspired dialogue.  Cara Delevingne, on the other hand, doesn’t seem to be nearly the actor that Mr. DeHaan is, but she’s wonderful in the film.  She’s got tremendous charisma that shines through the screen, and a great energy that helps carry her through all the weird silliness.  I liked when the film allowed Laureline to be a tough, smart action heroine.  I wish she didn’t become a damsel in distress in a white dress calling out for Valerian in the second half of the film.  Oy.

I could go on… (why, for instance, does the film call the group of human heroes the Federation, a name that Star Trek has been using for fifty-plus years, rather than coming up with something else?) but I don’t think it’s worth it… I think you get the idea.

Visually, Valerian and the City of a Thousand Planets is a blast.  If you want to turn your brain off and just eat popcorn and enjoy the spectacle, then there is fun to be had watching this film.  I did have fun!  But I was hoping for much more.  I’m a huge sci-fi fan, but my standards are high…