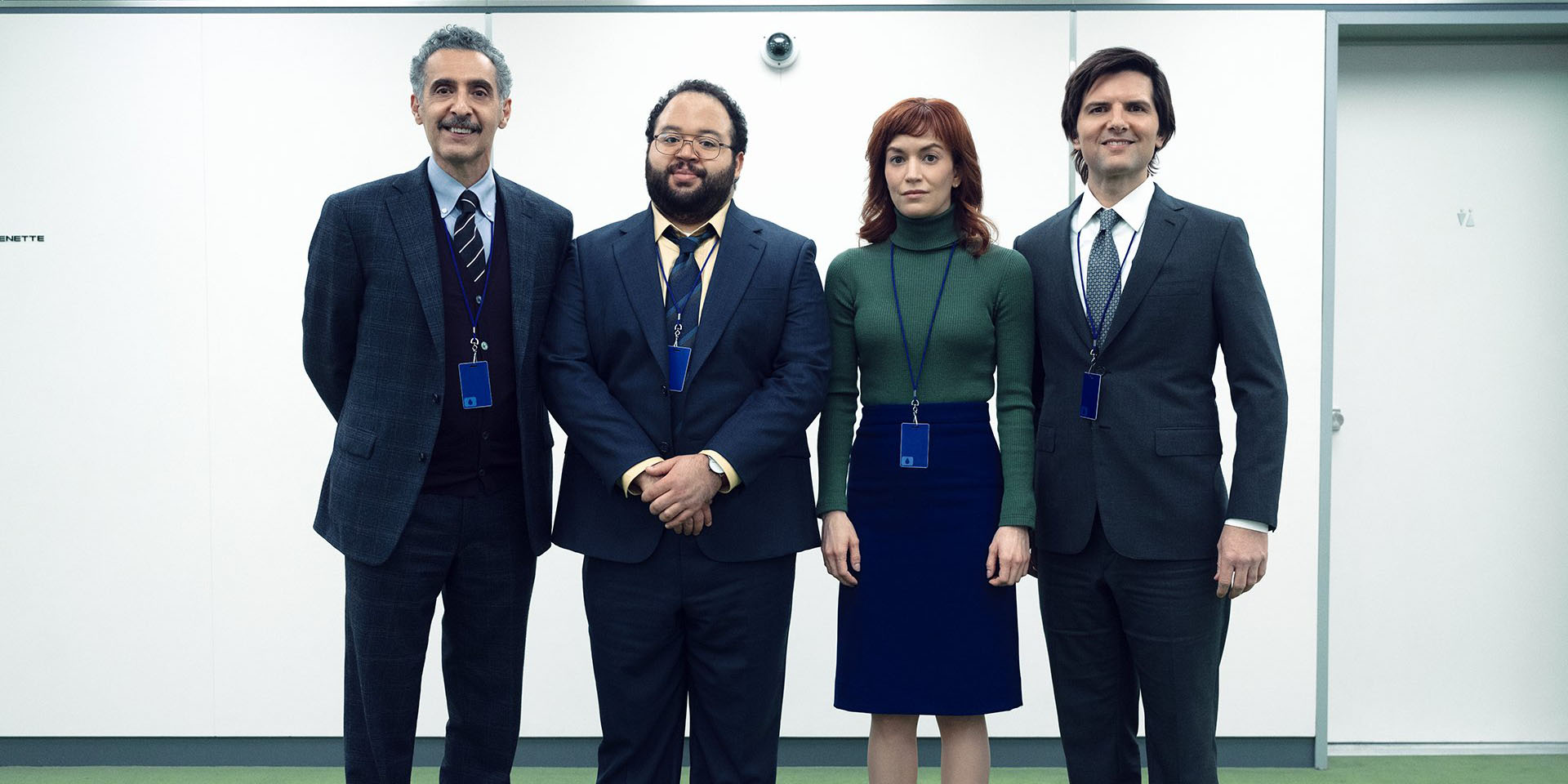 In Severance, Adam Scott (Party Down, Parks and Recreation) stars as Mark, a man who has chosen to undergo the “severance” procedure for his mysterious job at Lumon Industries.  The severance procedure splits his brain, so that the Mark who works for the company from nine to five has no memories or knowledge of the life he lives for the rest of his out-of-work hours, and vice versa.  “Innie” Mark (the Mark during work hours) works alongside Dylan (Zach Cherry) and Irv (John Turturro).  “Innie” Mark is content with his routine at work when the show begins, but things start to change when his co-worker Petey (Yul Vazquez) disappears and is replaced by a newly-severed employee, Helly (Britt Lower).  “Innie” Helly is horrified at her situation, seeing it as slavery from which she cannot escape.  Her efforts to find a way out of her severed state start to shake up Mark’s complacency and cause him to question his own situation.  Meanwhile, “outie” Mark is contacted by Petey.  “Outie” Mark of course has no idea who Petey is, but Petey wants Mark’s help investigating what he believes are the nefarious goings-on at Lumon Industries…

I thoroughly enjoyed this nine-episode first season of Severance!  The show is a delightfully clever mash-up of an exploration of a boring, drone-like office job (as seen in shows like The Office or movies like Office Space), with the sci-fi weirdness and mysteries of a show like Lost.  It’s a wonderfully compelling combination, and it’s brought to life with gorgeously memorable production design a terrific cast.

I’ve been a big fan of Adam Scott’s for years, and he’s a terrific choice to anchor this show.  I love the way he plays “innie” Mark with a gentle innocence.  We like this Mark, and we’re rooting for him.  Then there is “outie” Mark; Mr. Scott walks a careful tightrope in that both Marks are the same character, and yet at the same time they are also very different people.  “Outie” Mark is struggling with grief over the death of his wife, and he’s making some poor choices.  Mr. Scott does terrific nonverbal work in the quiet scenes of “outie” Mark alone at home, wallowing in his quiet desperation; and he’s also wonderful in showing us the moments in which “outie” Mark shows sparks of life and humor in his interactions with his pregnant sister (played by Jen Tullock).

Helly’s appearance in Mark’s severed “macrodata refinement” office is the first crack in what had been a well-ordered machine, and Britt Lower is terrific as the stick that stirs the pot.  While Adam Scott’s “innie” Mark shows us the way in which someone could accept this “innie” severed world as normal, Helly shows us the ways in which it is an unending horror.  Ms. Lower is magnetic on screen.  She plays Helly as someone who, on the one hand, might fit into a normal, everyday office environment.  At the same time, she has a rabble-rousing charisma that energizes the characters around her and the show itself.  This is a terrific performance.

The always-great John Turturro (The Big Lebowski, The Batman) is wonderful as the prickly Irv, who is obsessed with following company protocols to the letter.  He’s gloriously annoying in the early-going.  It’s one of the show’s great magic tricks that, by the end of these nine episodes, we’ve come to care as deeply for Irv as we do.  Mr. Turturro magnificently plays every level of that gradual peeling-back of the onion as we get to know Irv better.  It’s a beautiful performance.

Zach Cherry is equally great as Dylan.  Like, Irv, Dylan starts out the season as a stand-offish character.  He’s blustery and focused on getting ahead in the office (and getting the little weird prizes the workers seem to get for their small achievements).  But as the season unfolds, we see that Dylan actually has a huge heart, and Mr. Cherry’s impeccable comedic timing makes Dylan probably the funniest character on the show.  When he gets some heroic moments in the season finale, they’re incredibly well-earned and satisfying to see.

I had no idea Christopher Walken was going to be on this show!  He is an absolute delight as the fastidious head of the “optics and design” department at Lumon.  Mr. Walken plays somewhat against type here.  His character, Burt, is quiet and gentle.  It’s wonderful to see Mr. Walken sink his teeth into a character like this!  As we see Burt and Irv develop a friendship than might be something more, Mr. Walken and Mr. Turturro display beautiful chemistry together.  I hope we see lots more of Burt in season two!!

Patricia Arquette (True Romance, Ed Wood, Boyhood) is delicious in her villainous role as Harmony, the boss of our four main “macrodata refinement” workers… while also spying on “outie” Mark in the role of his daffy older neighbor Mrs. Selvig.  I love how much fun Ms. Arquette is in both roles!!  She’s all icy calm as Harmony, while as Mrs. Selvig she lays it on thick, cooing over Mark and pretending to forget where to put her garbage and recycling bins.

Tramell Tillman makes an instant impression as Milchick, the supervisor of the severed “macrodata refinement” workers.  When Milchik smiles, he seems so sweet!  And yet, at the same time, he displays a calculating coldness in the way he manipulates the “innie” characters… and he’s not opposed to torturing them in the “break room”.  I can’t wait to learn more about Milchik.  How much does he know about what’s really going on at Lumon?  Why is he doing what he’s doing?

Dichen Lachman (Dollhouse, Altered Carbon) has a small but important role as Ms. Casey, the “wellness counselor” for the severed employees who puts them through bizarre rituals that are supposedly intended to support their good mental health.  (These wellness sessions are so bizarre that I am incredibly curious to know what their true purpose is.)  Ms. Lachman puts on a stilted weirdness that is instantly compelling.  I can’t wait to learn more about what is going on with her character!

Michael Chernus is very funny as Ricken Hale, the somewhat pompous self-help author who is married to Mark’s sister.  Mr. Chernus is playing a very similar character here to the one he played on Orange is the New Black, but he’s so perfect in the role that I’m not complaining.  (One of my favorite aspects of this season’s story was how Ricken’s silly book became something of a Bible to the naive “innies” when they inadvertently got their hands on it!)

Severance was created by Dan Erickson, and the episodes were directed by Ben Stiller and Aoife McArdle.  I love the visual look of the show.  The production design of the Lumon offices is endlessly wonderful.  It’s got a retro look that feels at the same time generic and unique; a perfect combination for the world the show is creating.  I loved all the gentle touches of weirdness in the Lumon offices: the procedures manuals bound to look like Bibles; the dramatic painted artwork; the all-white, narrow and twisty hallways; the bizarre awards for good workers (Finger puzzles!  Waffles!  Melon balls!  Dance parties!), and on and on.  Just as I loved on Lost every time we discovered a new Dharma station, so too did I love on this show every time we got to see a new corner of the Lumon offices: from the torture-chamber “break room”; to the Perpetuity Wing with its statues and exhibits in homage to the Eagan family who founded Lumon; to the room with baby goats.  (More Lost connections in my head: Petey’s hand-drawn map of the Lumon offices reminded me of the Dharma station map found in the Hatch!!)  Each new expansion of the Lumon world was beautifully executed and filled with memorably bizarre details.

Overall, I was pleased at how the show established its many mysteries and slowly began to dole out answers.  I’d have preferred had the season finale given us a few more answers, but I’m willing to roll with the show for now.  I’ve been burned before by mystery-based shows (cough Lost cough) but I’m hopeful future seasons will provide the answers I so desperately desire.  (I’m of course eager to know more about the Eagan family and Lumon.  What are their true goals?  What are our characters actually doing when they look for wiggly, evil numbers on their computer screens?  Why are all the departments within Lumon kept so separate?  How much do the non-severed Lumon employees like Harmony and Milchik know, and why are they going along with what Lumon is doing?  What is the nature of Harmony’s connection to the Eagan family and to Lumon; why did she have what appeared to be a Lumon shrine in her home?  Is Lumon severing people outside of their offices?  And of course, there are all the mysteries regarding Mark’s wife…)  I also have plenty of questions about how the “severance” process worked and what the “innie” characters do/don’t know.  (For instance, I was a little surprised that “innie” Irv knew how to drive a car.)  But I’m OK with some of those details being left vague.

For now, there were certainly plenty of satisfying moments in which small clues suddenly slid into place and made sense.  (The revelation that “outie” Irv is a painter explains both his waking nightmares of black sludge pouring down on him, and also the moment in the early going when we saw “innie” Irv scraping away at black stuff caked under his nails.)

I want to praise the creepy and memorable music for the show.  I love the main theme music, and I love how it was deployed throughout the series; it does so much to set the tone of this world!

The nine episodes built up towards a riveting and intense season finale.  I was sort of shouting at my screen for the characters to hurry up and do everything I wanted them to do before their ticking clock ran out.  There were a lot of great payoffs in that finale, and also a lot of enjoyably frustrating moments of missed opportunities and delay.  The episode ended on a staggering cliffhanger.  I respect the makers of the show for their audacity in choosing to end the season on such an enormous moment of tension.  These cliffhangers are rough in the age of streaming shows, when we often have to wait for more than a year for the show to return.  I find myself preferring shows that reach more of a resolution at the end of each season’s block of episodes.  At the same time, I love that this show took such a big swing in the final seconds of the finale.  It’s going to be a torturous wait for more episodes!!