Skip to the content
HomeWritten PostJosh’s Favorite Comic Book Series of 2018 — Part One! 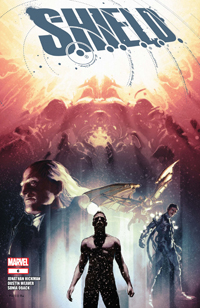 Here now is my list of my Favorite Comic Book Series of 2018!

I usually use this list to highlight continuing series (or at least mini-series), but I also want to note the terrific one-shot Dr. Horrible: Best Friends Forever (written by Joss Whedon and illustrated by Jose Maria Beroy & Sara Soler), the spectacular new Thanos graphic novel Thanos: The Infinity Conflict (written by Thanos’ creator Jim Starlin and gorgeously illustrated by comic-book master Alan Davis) and My Heroes Have Always Been Junkies (written by Ed Brubaker and illustrated by Sean Phillips — a beautiful stand-alone that made me hoot with glee when the last-page shocker revealed that the whole story took place within the world of their magnificent crime-series Criminal).  I was also really, really happy to see Chris Claremont back writing the X-Men, albeit very briefly, this year, with a short story about Kitty & Colossus in the X-Men Wedding Special and a tale about young Nate Summers in The Exterminated.

24. S.H.I.E.L.D. (by Jonathan Hickman and Dustin Weaver) — Jonathan Hickman and Dustin Weaver’s magnificent series about the secret history of the Marvel Universe was abruptly cut off back in 2011.  After a long, long, looooong wait, I was delighted that the series was finally completed this year!  It’s crazy that we had to wait so long, but I am so happy that Marvel was able to ensure that this series was brought to its proper conclusion.  When read together as a whole, this is a fantastic story with connections to a lot of Mr. Hickman’s other Marvel work (particularly his runs on Fantastic Four and The Avengers)!  (Click here to purchase vol. 1 of this story from Amazon, and here for vol. 2.) 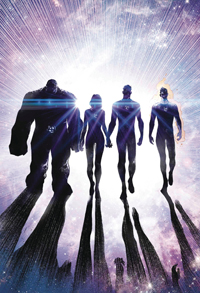 23. Fantastic Four (by Dan Slott and Sara Pichelli)– Marvel hasn’t published a new Fantastic Four book for years, but the series finally returned this year in great form from Dan Slott and Sara Pichelli.  The FF was the first Marvel super-hero series I ever followed monthly, and it’s always been close to my heart.  This series would be higher on this list if Ms. Pichelli hadn’t been replaced after issue #3 by rotating artists. 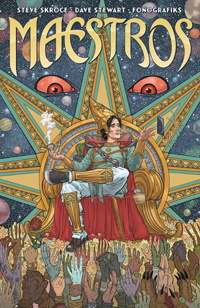 22. Maestros (by Steve Skroce) — Steve Skroce wrote and illustrated this deliriously weird fantasy epic.  The Maestro — the all-powerful head good-guy magician in this fantasy universe — and his family have all been murdered; now his mostly-hapless banished son finds himself names Maestro and given tremendous power, but there’s also a huge target on his head.  He always thought he could do things better than his dad — will that actually be the case?  This book is funny and horrifying and endlessly inventive, and Mr. Skroce’s astounding, hyper-detailed artwork is a delight.  (Click here to purchase the collected edition from Amazon.) 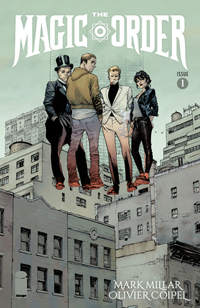 21. The Magic Order (by Mark Millar and Olivier Coipel) — The Magic Order is a group of magician families, hiding in plain sight in modern-day America, tasked with protecting the world.  But one by one, the powerful magicians are being murdered, and their misfit kids have to save the day (and their own necks).  Mr. Millar’s stories can always be counted on to be fun and surprising and boundary-pushing (there’s some ultra-violence in these pages!), and Olivier Coipel’s masterful artwork makes me green with envy. 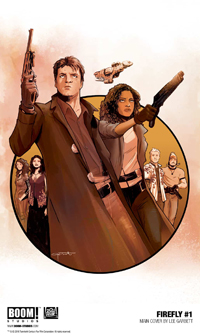 20. Firefly (by Greg Zak and Dan McDaid) — The latest comic book continuation of Joss Whedon’s beloved, killed-before-its-time series, is set before the movie Serenity and tells a rollicking new adventure yarn of Mal and the gang, while also digging deep into an untold story of Mal and Zoe’s tough wartime days.  So far I’m quite enjoying this new story; it has the right tone and a good balance of fun and action/adventure.  My only disappointment is that when the Firefly license shifted away from Dark Horse Comics and to Boom! Studios, that meant that the storylines running through Dark Horse’s mini-series, which were set AFTER the movie Serenity, were left unfinished.  (The last mini-series, No Power in the ‘Verse, ended on a cliffhanger.)  I hope we do someday get the conclusion to those stories.  But in the meanwhile, I am digging this new take. 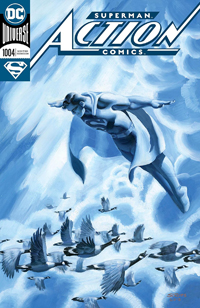 19. Superman and Action Comics (by Brian Michael Bendis and a rotation of artists) — After almost two decades as one of the main creative voices at Marvel Comics, Brian Michael Bendis shifted to DC this year and took over Superman and Action Comics.  It took a little while for things to rev up (I wasn’t blown away by the Man of Steel mini-series that launched Mr. Bendis’ work at DC), but I’m really starting to dig what Mr. Bendis is doing with the Superman universe.  I’m enjoying his takes on these classic characters and also how he is endeavoring to introduce new characters into the mix.  I’m particularly enjoying Action Comics, with Mr. Bendis’ focus on the goings-on at the Daily Planet and the Lois-and-Clark relationship.  (The more cosmic-scale Superman book isn’t quite as interesting to me.)  Several spectacular artists have been illustrating these books, and while I prefer a regular artistic team over a rotating group, it’s hard to argue with the quality of this amazing artwork.  (Ryan Sook’s Action #1004 might be the most beautiful mainstream superhero comic book I have seen in years.) 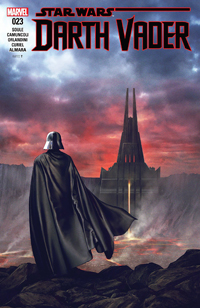 18. Marvel’s Star Wars Comics — It is extremely rare for a licensed comic book series to be good.  Dark Horse Comics published some great Alien comic books back in the day, and back when they held the Star Wars license they also published some great Star Wars comics…and also some bad ones.  There was a period in the eighties when DC Comics’ Star Trek comic book series, written by Peter David, was pretty terrific… and Warren Ellis’ recent run on Dynamite’s James Bond comic series was extraordinary.  But these examples are few and far between!!  Most comic-book versions of established movies or TV series wind up being lame shadows of the original works.  But somehow, shockingly, Marvel Comics’ Star Wars series have been pretty great!  That’s doubly impressive considering that Marvel has been publishing a TON of different Star Wars series, mini-series, and one-shots, set all across the Star Wars universe and timeline.  There have been a few weak links (I wasn’t super-excited for this year’s Age of Republic one-shots, set during the Prequel era), but for the most part, I have really loved these different stories!  The main Star Wars book has been great (I particularly enjoyed the “Hope Dies” storyline, in which Darth Vader finds a way to undo the Rebel Alliance’s gains post-Death Star destruction), and the Darth Vader series was extraordinarily weird and wonderful (giving us intriguing glimpses into how Vader sees himself, what he thinks of the Emperor, how he relates to and manipulates the Force, and lots more).  Marvel puts out these comics at a rapid pace, but the quality is remarkably consistent and high across all the different books, and I love the way they’ve incorporated a huge variety into the line, alternating continuing series with mini-series and one-shots, and exploring many different eras and corners of the extended Star Wars universe.  Great stuff.  (Click here to purchase the collected edition of the “Hope Dies” storyline from Amazon, and click here to purchase the collected edition of the “Fortress Vader” storyline from Amazon.) 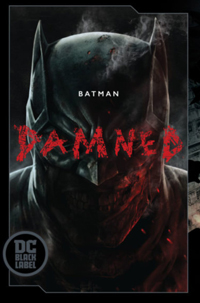 17. Batman: The Damned (by Brian Azzarello and Lee Bermejo) — I love the oversized format of this mini-series, telling a bizarre tale of a Batman pushed to the edge.  I have no idea where this story is going (or if any of this is supposed to be in continuity), but I am loving the ride.  Mr. Bermejo’s painted artwork is stunning — incredibly realistic and filled with a visceral energy and intensity that is gripping.  Issue #1 made headlines for showing Batman’s penis in a few panels (when a beaten Batman strips off his tattered costume after returning to the Batcave) and, wow, did the internet (and DC/Warner Brothers’ corporate) seem to lose their shit over a tiny bit of male nudity.  I didn’t think it was necessary to the story, but it also didn’t bother me at all.  I am worried the negative reaction will lead to censorship of the subsequent issues.  (That has apparently already begun — and, oh look, those panels in issue #1 will apparently be censored in all future printings.  Sigh.)  That sucks, but it doesn’t overshadow how special this story feels to me so far. 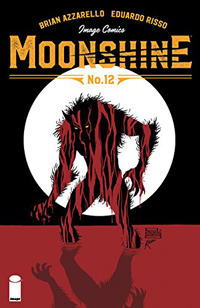 16. Moonshine (by Brian Azzarello and Eduardo Risso) — Wow, two in a row for Brian Azzarello on my list!  The team behind the extraordinary comic book epic 100 Bullets (go read that immediately if you haven’t yet done so!!), Mr. Azzarello & Mr. Risso, have re-teamed for this story of prohibition, gangsters, booze, and werewolves.  Every page is a delight.  Mr. Azzarello’s story is full of twists and turns and surprises; his dialogue is brilliantly clever; and Mr. Risso is again demonstrating his complete mastery of the comic book page.  There is no other comic book series anything like this on the stands today.  (Click here to purchase vol. 01 from Amazon, and click here to purchase vol 02.)

I hope you’ll rejoin me here on Wednesday for the continuation of my list!