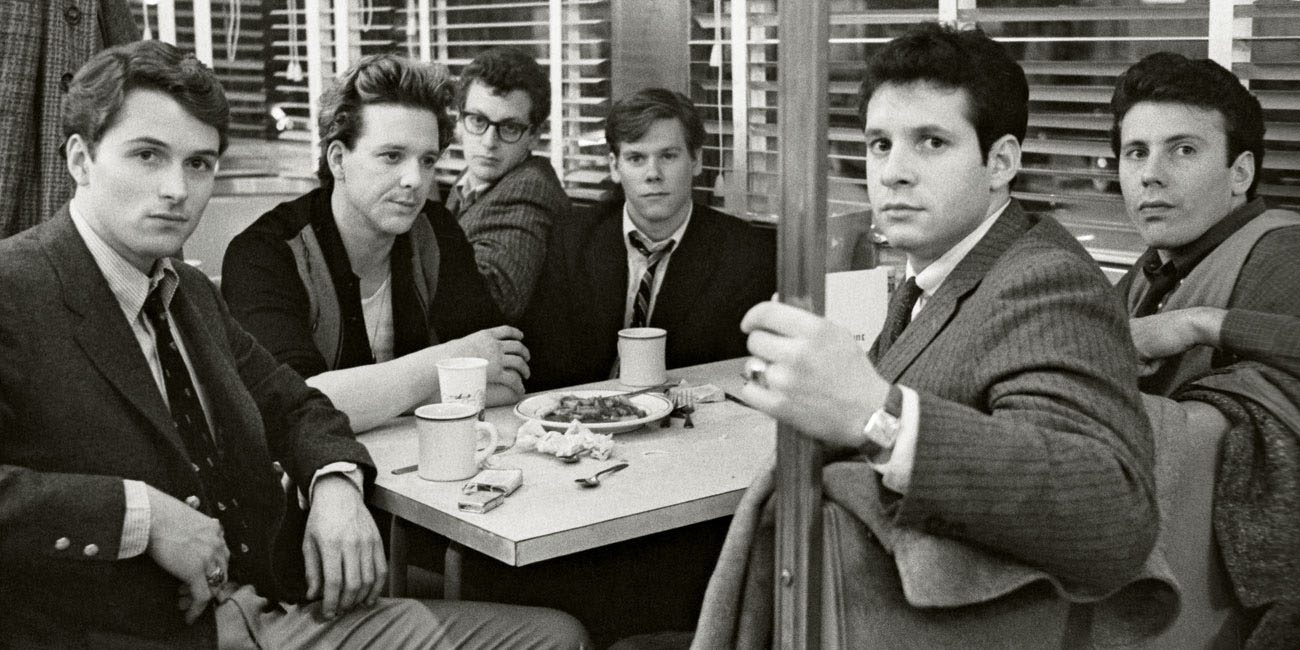 Diner, written and directed by Barry Levinson (who would go on to direct films such as The Natural, Good Morning Vietnam, Rain Man, Wag the Dog, and many more) is a semi-autobiographical story set in Baltimore in the closing days of 1959.  We follow a group of friends who are tentatively stepping into adulthood but who would much rather just hang out and shoot the shit in their local diner.  There’s Boogie (Mickey Rourke), the group’s charismatic alpha dog who has gotten into trouble gambling.  There’s Eddie (Steve Guttenberg), who wants his fiancee to pass a test of football trivia before he’ll marry her.  There’s Billy (Tim Daly), who finally hooked up with his long-time platonic friend, only to have gotten her pregnant.  There’s Shrevie (Daniel Stern), the only married member of the group, who finds himself at a loss with how to connect with his young wife.  There’s Fenwick (Kevin Bacon), the heavy-drinking outcast of a wealthy family.  And there’s Modell (Paul Reiser), the amiably chatty fellow hovering in the wings of the group.

I first saw Diner back in college and it was a revelation.  I was bowled over by how funny the film was and also how naturalistic and honest it was.  But somehow years and decades have passed and I’d been wanting to revisit this film for a while now.  I’m so glad I finally did!

The film remains impressive for how groundbreaking it was.  No one had ever made a movie quite like this before, one that didn’t really center on dramatic plot developments or character arcs.  Diner is a movie in which not much happens.  Rather, we luxuriate in watching this gang of chums hang out and chat about mostly nothing.  (A decade before Seinfeld, Diner is a movie about nothing.)  The best scenes in the movie are the long sequences in which we get to just watch these friends hanging out in their local diner, eating French fries with gravy and roast beef sandwiches and debating, for example, the best make-out music.  (This was apparently confounding to the studio, who almost didn’t release the film until critic Paulin Kael championed it after seeing it at a screening.)  I love how writer/director Barry Levinson allowed the actors to improv and also to talk over one another, to create the film’s naturalistic, conversational feel.  This might seem commonplace today, but this was groundbreaking back in 1982!!  It’s a huge reason why the film still feels so alive and relevant today.  It doesn’t have the stodgy, stagey feel that older movies can sometimes have.

This might not work if the cast wasn’t so spectacular.  Holy cow, what a cast this film has!  Every one of the main guys turned out to be a dynamite performer who would go on to great things.  Every single one of them is fantastic.  My personal two favorites are Paul Reiser’s Modell and Steve Guttenberg’s Eddie.  Paul Reiser’s funny, fast-talking Modell is a riot.  The running joke between him and Mr. Guttenberg’s Eddie about how Modell is pathologically incapable of coming out and actually asking for anything — a ride, a bite of Eddie’s roast beef sandwich — is hilarious.  And then there is Mr. Guttenberg’s Eddie.  This movie shows why Mr. Guttenberg became such a huge star in the eighties!!  But while the Police Academy films turned him, eventually, into something of a joke, here in this film we see that not only is Mr. Guttenberg a tremendous comedic performer, but he’s also a great actor.  We can see in his big eyes just how lost and uncertain Eddie is, fearful of giving up his youth with his friends.

It’s funny, I’ve often thought that it was Judd Apatow who introduced the idea of the man-child who’s reluctant to grow up into the cinematic lexicon.  Mr. Apatow’s wonderful comedies from the aughts (most notably The 40 Year-Old Virgin and Knocked Up) were replete with those types of male characters.  But we see the exact same type of personalities here in Mr. Levinson’s movie!  Each of these young men is desperately holding onto their childhood.  They’re all afraid, in their own ways, of moving on or away from their group of friends, from their rituals of hanging out every night in the diner.  This gives Diner an undercurrent of melancholy, beneath all the comedy.  It’s why the film is, for me, so resonant.  (The film reminds us over and over again that, while these guys are stepping into adulthood and dealing with adult topics — sex, marriage, pregnancy — they are still often behaving and thinking like kids.  Eddie won’t marry his fiancee if she doesn’t pass a football trivia test.  Billy punches a guy outside a movie theatre because of a slight from years earlier.  Shrevie and Fenwick hide in Boogie’s closet as a way to verify a sexual conquest he was boasting about making.  And on and on.)

There are definitely a few aspects of the film that haven’t aged well.  The focus is squarely on the boys; there are very few female characters to be seen.  (The film makes the curious choice to never even allow us to see the face of Eddie’s fiancee, despite the fact that her & Eddie’s impending wedding is the narrative device that brings the friends together for the story of the film.  This was obviously a choice made intentionally; I suspect because Mr. Levinson wanted the film to be focused on his central male characters.  Still, having a woman like this be a literal non-person feels wrong when watching this film today.)  There’s also some wildly inappropriate behavior by the boys, laughed off as comedy — most notably the infamous scene in which Boogie sticks his member into the bottom of a popcorn box.  Things like that don’t play as comedy in 2022 the way they might have in 1982.  I also found the scene in which Shrevie hollers at his wife Beth for not putting one of his records back in the exact right place (in his intricate record filing system) to be very uncomfortable; more so, I think, than was probably intended at the time.  Shrevie’s rage towards Beth feels so far out of line that the scene plays almost as abuse to me; rather than an example of how this young man doesn’t know how to find common ground with the young woman to whom he is married.  (It is still the latter, but in a way that is more destructive to our opinion of Shrevie’s character than I think was meant back in 1982.)

But while these moments stick out to me, I think it’s important not to judge older films by the standards of today.  And there’s so much about Diner that still works so well, even so many decades later.  And while I have just referenced several examples of the characters in the film behaving badly, one of the things that I think still works about Diner is how much empathy Barry Levinson has for all these characters, even as we see them being childish and making poor decisions.  While watching the film, I really got to love all of these guys.  I was rooting for them all by the end!

And it’s interesting that Mr. Levinson avoids the sort of easy, happy Hollywood endings that one might have expected.  No character’s story is wrapped up in a simple, pretty bow.  We’re given some cause for hope.  (Boogie, for instance, gets bailed out of his gambling debt.  Eddie goes through with the wedding.  Shrevie makes an attempt to reconnect with Beth.)  But for all of the characters, uncertainty and potential unhappiness remains.  (Might it not be better for Boogie to actually try to go to law school?  Will Eddie’s marriage work?  Will Shrevie’s?  Will Fenwick find a way to utilize his smarts and move away from his self-destructive behavior?  And what of Billy and Barbara?  This is the biggest question mark left at the end of the film.)  I respect Mr. Levinson for these unconventional choices.

Diner was Barry Levinson’s feature directorial debut, but you’d never know it.  The film opens with a fantastic tracking shot, in which the camera attempts to follow Modell through a crowded dance hall.  That shot made me sit up and take notice, and the film is filled with interesting shots (I love the scene in which Beth meets Boogie in the beauty parlor where he works, and then we watch through a mirror as Boogie leaves to meet his bookie) and approaches to creating the world of the story (there are so many great little cut-aways in the diner scenes, such as the shot of how they balance old ketchup containers over new ones, so the leftover bits will drip down and not get wasted).

Diner features mostly Jewish main characters; I was happy to see that was the case, and that Mr. Levinson avoided the type of cliche depiction of Jews so common in American media as nebbishy, neurotic types.  We get a little of that in Paul Reiser’s Modell, but other than that, I was happy that all of the main characters were cut from a different cloth: these are popular, tough guys!  They get into fights and go to strip clubs.  They just happen to be Jewish.  That’s wonderful to see.  (I particularly loved seeing these characters all wearing kippot, without any comment, at the Jewish wedding at the end.)

I really loved revisiting this film.  It’s a cinema classic that is still very enjoyable today, so many decades later.