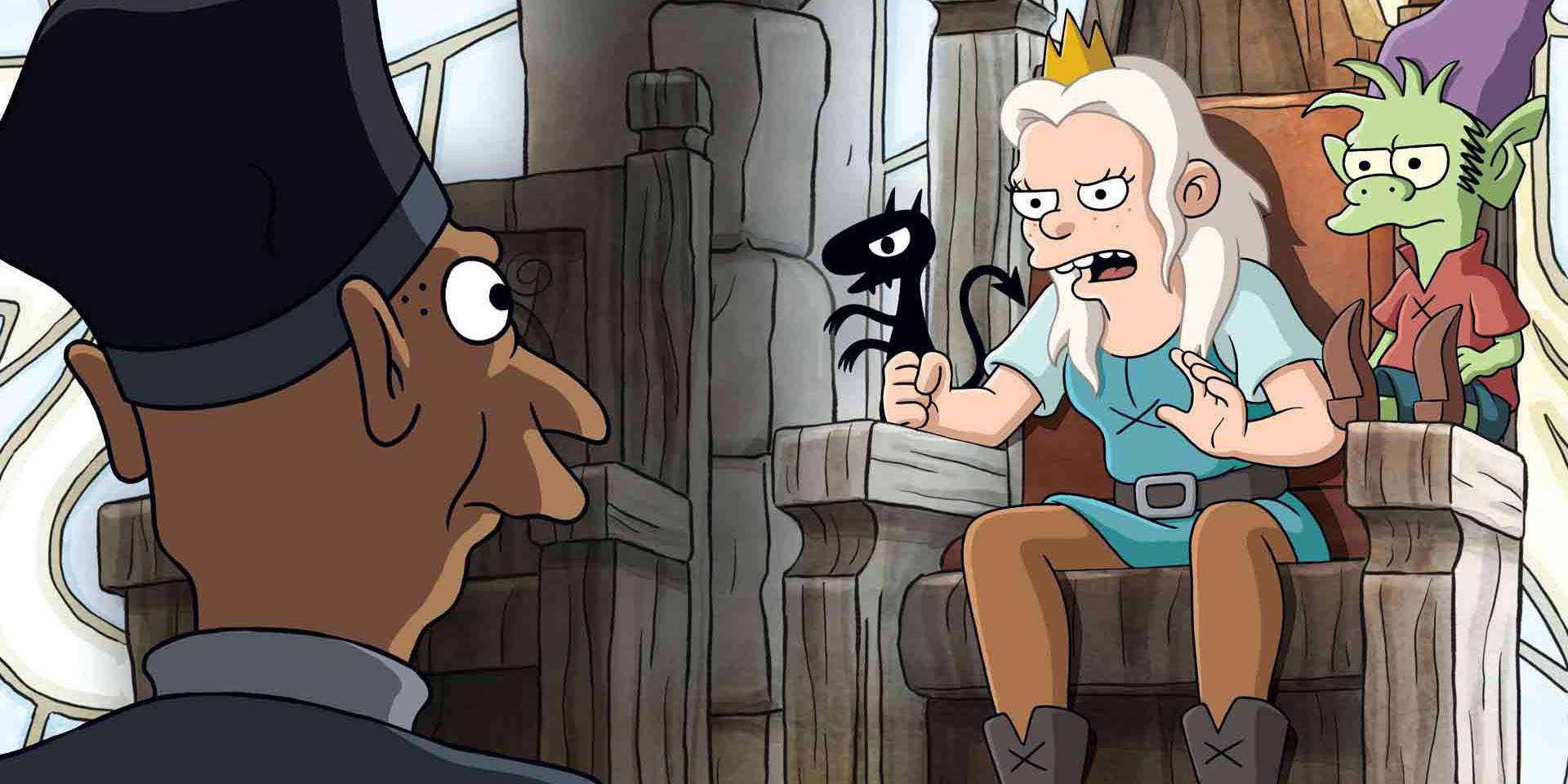 I’m a little bummed that Matt Groening’s Netflix animated series Disenchantment seems to continue to be flying very far under our cultural radar.  Overseen by Mr. Groening and Josh Weinstein (a writer of many wonderful episodes of The Simpsons and Futurama), Disenchantment is a very funny send-up of fantasy universes, while also being a compelling fantasy adventure at the same time!  I love movies/TV shows that are able to do both things at the same time — to poke loving fun at their inspirations, while at the same time telling a very good story set in that type of world/situation!  (Movies like Ghostbusters and Galaxy Quest are great examples of this.)

Disenchantment is a great show, and I wish more people were watching it!  It’s funny and silly, while at the same time it’s a compelling fantasy adventure story.

The lead character of Disenchantment is Bean (voiced by Abbi Jacobson), the hard-drinking, foul-language-spouting, smart and brave princess of Dreamland.  Bean’s two closest friends are a demon Luci (Eric Andre) and an Elf named Elfo (Nat Faxon).  All three lead performers are great, and very funny on the show.  They’re a compelling group, with strong chemistry together.

Disenchantment is different from both The Simpsons and Futurama in its continuity.  It remains episodic, in that each episode can be enjoyed on its own and has a beginning, middle, and end.  At the same time, the story has a strongly serialized aspect to it, with mysteries and character arcs continuing across multiple episodes (and seasons) of the show.  Over the course of its four seasons (so far), the series has developed a deep and complex fantasy world, filled with a vast array of characters and all sorts of overlapping mysteries and plot threads. I love this serialized aspect of the show; I love how well-developed the show’s fantasy world is.  It’s great fun getting to watch the writers peel back more and more layers of the world and these characters as the show has gone on.  This is part of what makes the show feel very special among the American animated TV landscape.

At the same time, the release pattern of this streaming show has, for me, diluted some of the impact this might otherwise have had.  Netflix has dropped the show in four 10-episode batches so far.  For each batch, they’re released all ten episodes at once.  Even though I’ve resisted too fast a binge, I don’t think it’s taken me more than 2-3 weeks to watch any of these seasons.  This means it’s a long wait of about a year between seasons, and I must confess this makes it hard for me to hold all of the show’s twists and turns in my memory.  The result is that some of what I think were intended as big revelations in season four didn’t land with as much impact for me as I think they should have had, because I didn’t have such a clear memory of all that had come before.  (For instance, there’s a lot of business this season about the connections between Dreamland and the Elves and the Trøgs, but I didn’t quite follow everything… I feel like I was missing a few pieces, and I wonder if this would have all made more sense if the previous seasons were fresher in my mind.)  This is a show I really would love to go back and watch through from the beginning.  (Though I don’t know when I’d ever find the time!)

Some more thoughts on season four:

As usual, the season ended on an enormous cliffhanger!  I do hope this is not the end of the show.  I can’t seem to find any information online, as of now, as to whether this show is coming back for a fifth season.  I hope this is not the end of Disenchantment!!  I really enjoy this show and look forward to my yearly fix.  I’d hate for the series to be left with its story unfinished.