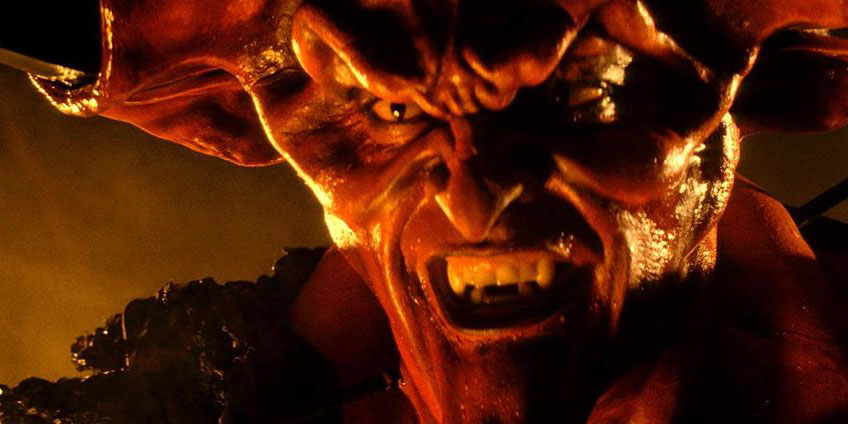 I’m a huge Ridley Scott fan.  Several of his movies are among my favorite movies of all time (Alien, Blade Runner) and he has a long list of other movies that I love a LOT (The Martian, Gladiator, the extended version of Kingdom of Heaven, etc.).  And yet, in Mr. Scott’s long career, there remain several of his films that I’ve never seen.  One that has intrigued me for years has been Legend (1985).  A fantasy film directed by Ridley Scott??  How have I never seen this?  I know some people love it a lot, and yet from what I knew or had seen of the film, there was something that gave me pause, that made me suspect it wasn’t a film I’d like.  And so I just never got around to it.

But recently, Arrow Video released a gorgeous blu-ray set including both the original version of Legend as well as a director’s cut.  Legend was famously truncated for its American theatrical release, while at the same time a different version — with additional scenes and a completely different score! — was released in Europe.  That European version isn’t included on this set because of rights issues, but what’s on the disc is even better: a significantly longer director’s cut that is a better representation of Ridley Scott’s original version for the project.  (The European theatrical version, while longer than the American theatrical version, was still significantly cut down from Mr. Scott’s original cut.  The director’s cut on this disc is apparently also edited down from Mr. Scott’s original cut, which has been lost.  The extensive special features on the blu-ray set delve into various other scenes and elements that were filmed but no longer seem to exist.  But nonetheless, the director’s cut on this disc appears to be the most faithful version we’ll ever get of Mr. Scott’s original intentions for this movie.)

I couldn’t resist picking up this blu-ray set, and over the past few weeks I have watched both versions of Legend and explored the set’s extensive special features.

I had a lot of fun doing so, and I’m so glad to have finally seen Legend, even while my initial suspicions that this would not be a film I’d love were proven correct.

I found the original American theatrical version of Legend to be a wild experience to watch.  The film has been edited down to near-incomprehensibility.  It’s really quite something.  (Unfortunately, a great many of the theatrical cuts of Ridley Scott’s films have suffered from being chopped up in editing in an attempt to shorten the run-time, much to the films’ detriment.  Some of these films were eventually restored by director’s cuts.  Kingdom of Heaven is a great example of this.  It’s a confusing, uninteresting mess in its theatrical form, while the extended director’s cut reveals the film to be a masterpiece.  Some of his films never got that redemption.  In my review of Exodus: Gods and Kings, I wrote that the film feels like it was destroyed in editing and I’d guess a much-better longer version exists; but no such director’s cut has ever been released.)

The theatrical version of Legend plays like something of a tone poem.  There is beautiful imagery, but for large swaths of the movie I didn’t have the faintest idea what was going on.  The film can’t be bothered to provide even basic set-up to its characters.  Who is Jack (played by Tom Cruise)?  Is he a regular human boy or some sort of woodland fairy-creature?  Is Lili (played by Mia Sara) a princess?  Where is she from?  Why do we never seen any of her people or her family?  What is her relationship with the poor baker woman who treats her like a daughter?  These are things that would be helpful to know!

The director’s edition still contains a lot of ambiguity, but the extra footage helps the story to play out in a far clearer fashion.  What’s fascinating is that the longer director’s cut doesn’t really have a lot of extra scenes.  It’s basically the same movie, it’s just that almost every scene has some additional moments and/or dialogue.  Those extra moments fleshing out the individual scenes really help to make the story feel like, well, a story that one can follow, rather than just a collection of imagery.

Every now and then you hear about a movie for which a full score is recorded, only to be thrown out and replaced.  That’s always seemed crazy to me, but it does happen.  With Legend, the original score was by Jerry Goldsmith.  I can’t believe they threw out a score by Jerry Goldsmith!!  Mr. Goldsmith is one of the very best film composers of all time.  He composed so many iconic and memorable scores over the course of his career, including but by no means limited to: Planet of the Apes, Star Trek: The Motion Picture, Chinatown, Hoosiers, L.A. Confidential, Poltergeist, Gremlins, Total Recall, and so many more!  He’d even composed the (brilliant!) score for Mr. Scott’s previous movie, Alien!  But Mr. Goldsmith’s score was dumped for the American theatrical release of Legend, replaced by a score by the German electric band Tangerine Dream.  Here on the blu-ray, Mr. Goldsmith’s score has been, thankfully, restored for the director’s cut.

I enjoyed both scores!  I actually quite like Tangerine Dream’s score.  It’s very bizarre, but it contains several extremely memorable themes that I liked a lot.  In conjunction with Mr. Scott’s beautiful imagery, this unique and strange score creates a very powerful effect.  It worked very well for the film.  Mr. Goldsmith’s score is more traditional, which could be considered a mark against it, but that also proves important in helping the director’s cut to be more clearly understandable.  Mr. Goldsmith’s score is able to do some important narrative heavy-lifting, helping me as a viewer to make better sense of what was happening in screen.  So I enjoyed both scores, and I don’t have a clear favorite!

Both versions of Legend are hampered by the limitations of the film’s small budget ($25 million) and what could be accomplished at the time with practical effects, prosthetics, make-up, etc.  (In one of the special features, Mr. Scott says that he wished he’d fought for an extra $5 million in the budget; that he thinks that would have made a big difference.  He’s probably right!)  There is some remarkable and memorable imagery in Legend!  The realization of Tim Curry’s villain character, Darkness, is extraordinary and the film’s greatest achievement.  It’s an instantly iconic, completely convincing and effective character, created through brilliant and beautiful make-up and prosthetic effects, in combination with Mr. Curry’s remarkable performance.  I was very impressed.  (I also quite liked the realization of the bog creature Meg Mucklebones — played by Robert Picardo, the Doctor on Star Trek: Voyager!)  At the same time, there are so many other places where I felt like the film strained under its limitations.  The goblins like Blix looked good in close-up, but watching them walking around made them look silly to me.  When we’re watching the magical unicorns at the heart of the story, it’s so clearly just picked-up shots of white horses running wild around the set.

Another weakness of both versions of the film is the inconsistency in tone.  There are times in which Legend feels like it wants to be an adult, sophisticated version of a fairy tale.  I liked those aspects of the film!  It’s there right from the beginning in the theatrical cut, in which it seems like the two innocent kids (Jack and Lili) are having sex in the woods.  (Jack lies Lili down in the grass and then we cut away to birds flying through the trees; I thought the cinematic language was clear.  That image is missing in the director’s cut, which makes more sense because Jack and Lili are supposed to start the film innocent and pure, which only changes as the story progresses.)  And then of course the film’s third act famously features Darkness attempting to seduce Lili.  Those scenes between Tim Curry and Mia Sara are dripping in sexuality.  There’s talk of flowing blood and, of course, there’s the eyebrows-raising sight of young Mia Sara in that low-cut black dress.  There’s also the whole business of how Jack’s Tinkerbell-equivalent fairy friend wants him to make out with her.  These were surprising and somewhat disturbing aspects of the story, but I felt that the film came alive in those moments.  Suddenly there was a surprising and interesting energy to the story.  To me, I was most interested in the film when it looked like Mr. Scott and screenwriter William Hjortsberg were attempting to subvert the common Disney fairy-tale tropes (and, arguably, return this modern fairy tale to the more horrific, truly scary nature that fairy tales used to have).

The problem is that, at the same time as there’s this dark and interesting aspect to the film, there’s also so much that seems very simplistic and aimed-at-children… and so struck me as sort of goofy (and not that interesting) as a grown-up viewer.  I didn’t have too much patience, for example, for the bumbling comic antics of either the evil goblins or the heroic dwarves (Brown Tom and Screwball).  I wish the film had been able to better balance these two sides of the tone.

Of the cast, Tim Curry is the clear stand-out as Darkness.  That he is able to create such a memorable and scary character while buried under enormous prosthetics and make-up is a testament to his skill.  Mia Sara is able to convincingly play both the innocent and evil versions of her character, which is to her credit.  (I wish the film allowed us to get deeper into her characters particularly in the first half when she’s still in her white, innocent mode.)  Tom Cruise, unfortunately, doesn’t click.  It’s surprising, because Mr. Cruise has always been a terrific actor, even when he was very young.  (He’s great, for instance, in Francis Ford Coppola’s 1983 adaptation of The Outsiders, which was released two years before Legend.)  But he seems sort of lost here, with no character to play.  I’m not sure how much is Mr. Cruise’s fault, versus the script or the editing.  His breathy ADR-ed dialogue in his early scenes doesn’t do him any favors.

Overall, I preferred the director’s cut of the film.  It was clearer and easier to follow, as I’ve already discussed.  All the little bits and bobs that were added back in helped to flesh out the story in a way that improved the film for me.  There were other changes that I liked, such as dropping the scenes of Darkness (with his weird green eyes and fingers, which looked to me like an unfinished visual effect) from the theatrical version’s opening.  We still hear Darkness’ voice, but now we don’t see him until he’s revealed to Lili towards the end.  I think that’s much stronger.

For me, the only little weaknesses of the director’s cut were that 1) I don’t know why they cut out the shot of the unicorn’s horn being restored; that was an important moment at the end of the film, and 2) I was surprised that we don’t see Jack and Lili go off together at the end, anymore.  In the director’s cut they go their separate ways, which to me muddied the ending a bit.  (Though upon some reflection, there’s an argument to be made for adding that touch of ambiguity.)

I’m happy to have finally seen Ridley Scott’s Legend (even while I doubt this is a film I’ll revisit any time soon).