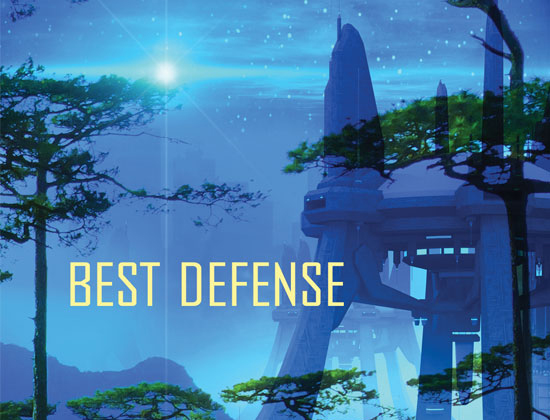 David Mack’s novel Best Defense is the middle book in a new trilogy of novels, entitled Legacies, intended to celebrate the fiftieth anniversary of Star Trek.  Click here for my review of the first book in this trilogy, Greg Cox’s Captain to Captain.

Best Defense picks up a few weeks after the end of Captain to Captain. The alien “transfer key”, capable of displacing its victims into an alternate universe, has been stolen from where it had been hidden on board the Enterprise by Captain Robert April eighteen years previously.  Kirk’s attempts to track the Romulan spy who stole the key are cut short by the collapse of peace talks between the Federation and the Klingon Empire.  Summoned by Federation negotiator Ambassador Sarek to the planet Centaurus, Kirk tries to prevent the outbreak of a shooting war with the Klingons, while the Romulans use the power of the transfer key to wreak havoc.  Meanwhile, in the alternate universe to which the key permits access, Captain Una (the former Enterprise first officer nicknamed “Number One”, from the original Star Trek pilot “The Cage”) attempts to locate her friends and crew-mates who were banished to that desolate universe eighteen years earlier.

I feel about Best Defense very much the same way I felt about Greg Cox’s Captain to Captain. Like Captain to Captain, Best Defense is a fun, quick read. David Mack is a great writer, and man can he write a terrific action sequence. (This was clear from his previous books, and the climax of Best Defense doesn’t disappoint.)  But while I have enjoyed both Captain to Captain and Best Defense, for a fiftieth anniversary trilogy, so far Legacies feels surprisingly slight to me. It’s not telling a story that feels all that critical in terms of the larger Trek universe, nor does it dig that deeply into any of the characters.

Best Defense also suffers somewhat from a classic sort of “middle chapter” syndrome in that the story feels somewhat stretched in order to fill out this three-book trilogy.  Mr. Mack’s story throws all sorts of obstacles at Kirk and co., and brings back several characters from Trek lore.  While it is fun seeing all those characters, to me they didn’t feel all that integral to the story, more like writerly distractions and a way to stretch out this tale to a three-book length.

That being said, of course it is fun to see Ambassador Sarek and Amanda again (this story is set a short time after the events of “Journey to Babel”).  It’s interesting to see their relationship with Spock at this stage — the years-long feud between Spock and Sarek has been mended, but the wounds are still fresh.

I also quite enjoyed the involvement of Dr. McCoy’s estranged daughter Joanna in the story (even though, as I commented above, all of the Joanna stuff feels like something of a digression from the main story being told).  Joanna was mentioned in the Original Series bible, but she never actually appeared in the show, she was only mentioned in an episode of The Animated Series.  The character has popped up in some novels, such as Brad Ferguson’s Crisis on Centaurus — props to David Mack for maintaining continuity with that novel, that established that Joanna McCoy was a nurse on a planet called Centaurus.  Mr. Mack finds some interesting opportunities to flesh out the young Joanna, thrust into several crisis situations, and also to explore her fraught relationship with her father, who is put into the unusual position of having to worry about his child.

I also enjoyed the time Mr. Mack spends in developing the Romulan crew of the cloaked warship.  We learn a lot more about the Romulan spy, Sadira, and follow her increasingly fraught relationship with the crew of the Romulan ship she has commandeered.  It’s a familiar dynamic — the Romulan soldiers chafing at the orders given by a secretive Tal Shiar operative, something we have seen in many previous Trek Romulan stories — but it works, and I enjoyed Mr. Mack’s work developing these Romulan characters.

This novel follows up on Captain to Captain in exploring the tense relationship between the Klingons and the Federation at this time in Trek history.  I like that Mr. Mack squarely addresses the situation with the forced peace between the Federation and the Klingons as a result of the actions of the Organians (from the Original Series episode “Errand of Mercy”).  In that episode, the Organians enforced peace between the two galactic powers by threatening to annihilate the side that opened up hostilities against the other.  But while this “Organian Peace Treaty” has been referred to over the years in various Trek books, it was never again mentioned on-screen in any Trek adventure, and by the time of the Trek movies there didn’t seem to be anything stopping the Klingons and the Federation from fighting one another.  So what happened?  Why does that change?  Mr. Mack doesn’t answer those questions, but he does deal with characters on both sides questioning what sorts of actions might prompt the Organians to step in.  Mr. Mack has a tricky road to hoe here, as the enforced peace created by the Organians in “Errand of Mercy” is a somewhat silly situation that was (wisely in my opinion) ignored by later Trek on-screen adventures, but Mr. Mack does his best to honor the continuity left by “Errand of Mercy.”

In the scenes detailing Sarek’s negotiations with the Klingons on Centaurus, we meet a reasonable Klingon named Gorkon.  I assume this is supposed to be the same character as the Chancellor Gorkon who attempts to make peace with the Federation in Star Trek VI: The Undiscovered Country, before being assassinated.  In theory it’s an interesting idea to explore Gorkon before the events at the end of his life in Trek VI, but I found myself continually questioning Mr. Mack’s depiction of the character and what happens to him.  While Gorkon at first seems like a reasonable peace envoy, he disappears during the negotiations (the Klingons believe he was assassinated), which shatters the peace talks and leaves both sides heading towards war.  Hmm, exactly like what happens in Star Trek VI!!  (Except in Trek VI, Gorkon actually IS assassinated.)  It seems silly that practically the same thing would happen to Gorkon twice.  Wouldn’t Kirk remark on this in Trek VI if this was the case?  Wouldn’t Kirk or Spock even mention in Trek VI that they had encountered Gorkon before?  (That movie strongly suggests that Kirk meets Gorkon for the very first time when he and his entourage beam over to the Enterprise for dinner.)  This doesn’t really work for me.

I was also surprised by some character inconsistencies within Mr. Mack’s book.  After Gorkon’s disappearance, we read that Sarek summons Kirk and the Enterprise specifically to come and help control a situation rapidly spiraling out of control.  And yet, when Kirk arrives and smoothly helps extricate Sarek from being held hostage at gunpoint by the Klingon delegation (furious at what they believe to be the murder of Gorkon), Sarek berates Kirk for ruining everything and undermining Sarek’s position by getting involved.  Huh?  That doesn’t track for me at all.  Another example: while most of the Klingons in this book, other than Gorkon, seem to be spoiling for a fight, when Kirk and the Enterprise arrive at Centaurus we see that the grizzled Klingon commander in orbit of the planet, Kovor, actually seems somewhat reasonable.  Rather than engaging the Enterprise in battle, he reasonably agrees to help Kirk communicate with Prang, the Klingon leader on Centaurus in the absence of Gorkon.  And yet, later in the book, after Sarek finally is able to get Prang to see reason and agree to cooperate with the Enterprise in order to locate the cloaked Romulan ship that has been secretly manipulating events to drive the Klingons and Federation towards war, all of a sudden it is Kovor who is the unreasonable one, at first refusing to cooperate with Kirk despite Prang’s orders.  Prang tells Sarek that Kovor “is not to be trusted,” which suggests that perhaps the Klingon was just pretending initially to be reasonable with Kirk in order to hide his true motive, but nothing that happens later in the book supports that idea, and we never get any follow up on Prang’s suggestion to Sarek that Kovor is not trustworthy.  These inconsistencies surprised me.

As with Captain to Captain, by the end of Best Defense certain story-lines have been resolved, giving the book’s ending some sense of conclusion, but we also get a good cliffhanger leading into the final novel in the trilogy.  I’m excited to move forward to that, Dayton Ward and Kevin Dilmore’s Purgatory’s Key.