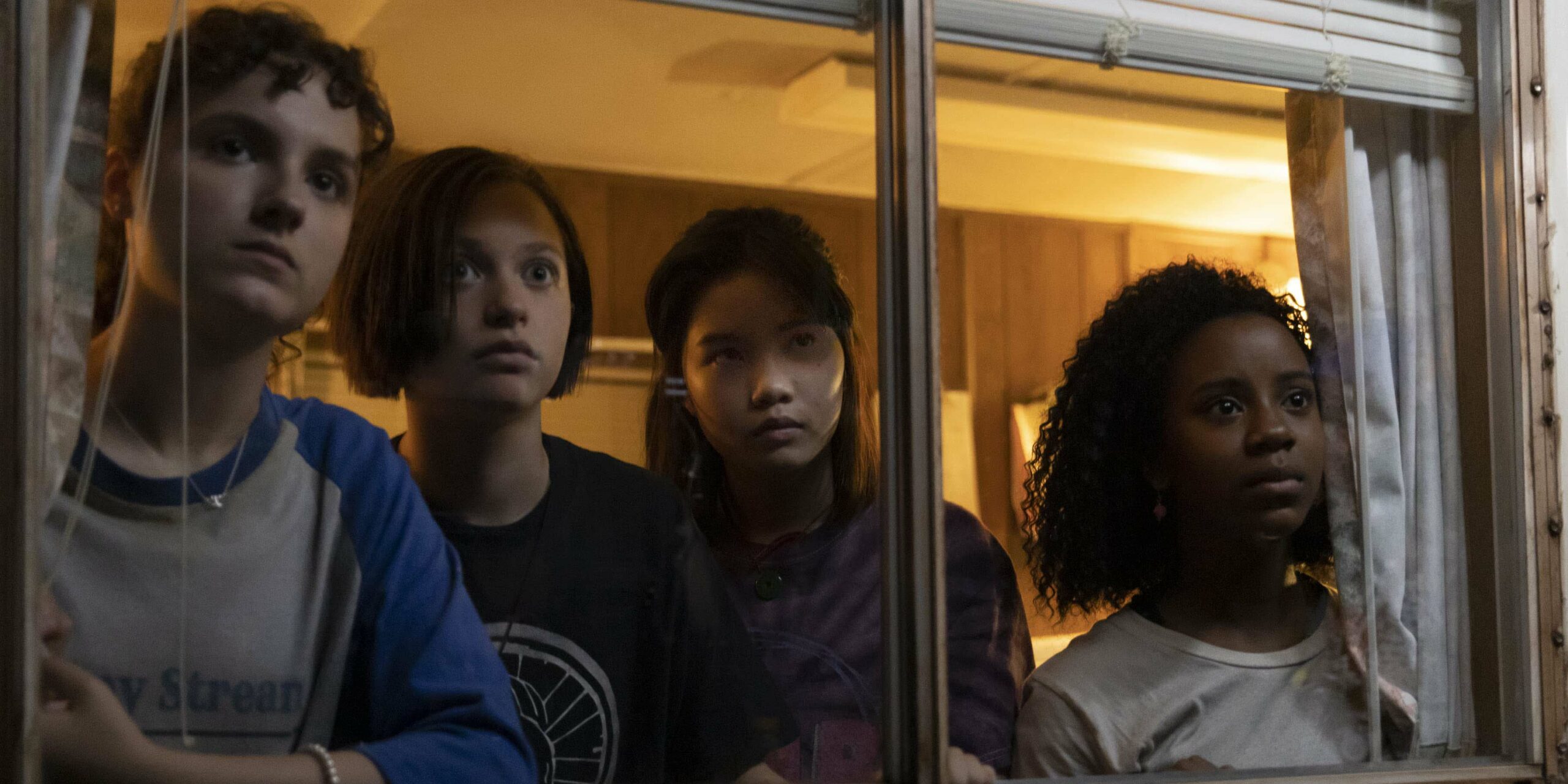 Paper Girls is an eight-episode TV series on Amazon Prime, adapted from the wonderful comic book series written by Brian K. Vaughan and illustrated by Cliff Chiang.  One might describe the show as Stranger Things with girls, though such a simplistic description undersells the show’s depth.  In the early morning after Halloween in 1988, four paper girls get swept up in a complicated time-travel adventure.  They find themselves caught in the middle of a war between the “Old Watch”, basically a group of time-cops from the future, and an opposing group of young people who want to try to make changes to the timeline in order to improve the world.  The four paper girls travel first to 2019 and then 1999, and in so doing encounter future versions of themselves and their family members who often wind up being quite different than what they’d expected, forcing them to confront their understanding of themselves and those close to them.

The Paper Girls comic book series is one of the most fun, original comic-book series in years.  It’s a delightful adventure, filled with all sorts of mind-bending sci-fi shenanigans and a delightful sense of playfulness… while also being a deeply nuanced and complex character study of these four young women, in which they each must confront some heavy personal issues.  I was thrilled when I heard that the comic would be adapted for TV, and over-all I was very pleased by how strong this first season was.  It’s very well made.  It carries through a great deal of the qualities that made the original comic book series so strong and interesting.  And the cast is terrific, particularly the four central kids.

Unfortunately, Amazon cancelled the show a month after it was released.  Theoretically the show is getting shopped around to other streamers, though it seems like the odds of there being any more seasons are slim.  This is a shame, because I thought this first season was terrific; this is a show that definitely deserves to be allowed to continue.  I’m sure there were lots of people like me who wanted to watch but didn’t have a chance in those first few weeks of release.  When I read the show was cancelled, I questioned whether to go ahead and ever watch the first season.  Ultimately, because I love the comic book series so much, I wanted to see what this adaptation looked like.  I’m glad that I did.  But frankly I’m not sure whether or how to recommend a show that was cancelled without its story being completed.  One could always go on and read the comic book series to find out how everything wraps up.  (Though the show diverged from the comic in the back half of the season.)  I really enjoyed this show and I’d bet that readers of this blog would dig it as well.  You just have to brace yourself for the fact that these eight episodes only give you part of the story.

This show wouldn’t work if you didn’t love the four central kids; I’m impressed at the strength of the four young actors cast in the lead roles.  Not only does each one feel absolutely perfect based on these characters from the comics, but each one is able to bring tremendous depth of emotion to their performances.  I loved these kids by the end of these eight episodes (which makes it only more painful that we’ll likely never get to follow them on the rest of their journeys).

Riley Lai Nelet plays Erin Tieng.  The early morning on which the girls’ adventure begins is Erin’s first morning as a paper girl.  We enter the story, and meet the other girls, through her eyes.  Erin is a compelling “every-girl” to serve as our entry-point to the story, but the series never makes the mistake of making her too boring or bland.  We quickly see that Erin struggles with all sorts of issues; she feels that her family is disliked by their neighbors because they’re Chinese-Americans, and she is starting to push against the structures set by her immigrant mother.  Sofia Rosinsky plays Mac Coyle, the tough as nails paper girl “from the wrong side of the tracks”.  Mac has built up high walls because of her rough upbringing, but we quickly see that she is brave and loyal.  Camryn Jones plays Tiff Quilkin, one of the few African-American kids in their suburban town.  Tiff is fiercely intelligent and focused, though her adventures through time will force her to confront whether her personal dreams of “success” and attending a great college will make her happy.  Finally there is Fina Strazza as KJ Brandman, a Jewish girl who all the other girls think lives a perfect life.  It’s painful to KJ to have to constantly push back against the outsider status her religion and family’s well-to-do-status give her, and we see that (like all the girls) she is struggling with all sorts of issues of identity and belonging, in particular the slowly dawning realization that she is a lesbian.

The girls encounter an array of interesting characters on the course of their adventures.  Ali Wong plays the 2019 version of Erin.  The younger Erin finds her older self to be deeply disappointing.  Adult Erin seems lost, dealing with anxiety and without a stable relationship or job.  Ali Wong is a hilarious comedian, but she shines here in this mostly dramatic role as this sad-sack Erin.  She’s instantly relatable, and she brings just the right amount of sharpness to adult Erin to make her a delightfully interesting character.  Then there is Nate Corddry (most recently seen on For All Mankind), who plays Larry, a farmer fighting on the side of the future-teenagers in the time war.  The kids encounter multiple versions of Larry, and Mr. Corddry is a lot of fun portraying Larry at different stages of his life’s journey.  Jason Mantzoukas (Brooklyn Nine-Nine, The Good Place, Invincible) is perfectly cast as “Grandfather”, the crocs-and-socks-wearing leader of the old watch.  Mr. Mantzoukas is a hoot as the curiously casual leader of what seems at first to be a bunch of time-lord fascists.

The series is a fairly faithful adaptation of the comic book series.  Most importantly, all four of the main kids are perfect.  The series gets their characters exactly right, which is critical.  As these eight episodes get underway, the stories wound up diverging in many ways from the comic book series.  For the most part, I enjoyed these changes, as most of the adjustments focused on giving each kid more opportunities to explore their future selves and lives and to confront how what they learned meant about their own self-image and views of the world.  I particularly enjoyed the extended sequence in which Mac meets up with her brother Dylan in 2019, and she discovers that he’s grown up into a completely different person than the bully she’s always known.  (Cliff Chamberlain is terrific as the grown-up Dylan.)  I really enjoyed the extra time we got to spend with all the grown up versions of the paper girls.

The visual effects of the show aren’t quite at the level I wish they were for a sci-fi adventure series here in 2022.  Actually, the first episode keeps almost all of the sci-fi action off-screen, which I think is the biggest weakness of that first episode.  The early issues of the comic were very character-focused, but they also gave us a few big crazy panels showing us the sci-fi weirdness, and I missed that imagery from the first episode.  I wanted that glimpse of the craziness going on around the edges of this story.  Here it’s mostly just depicted by weird colors seen outside of windows, which feels frustratingly limited.  (And also a little confusing.  For instance, the show makes a mistake at not showing us clearly the weird-looking future teenagers, Heck and Naldo, when the girls first encounter them.  We’re supposed to immediately understand that these are not the punk teenagers from 1988 the girls at first assume them to be; but because the show keeps them mostly hidden in shadows, that revelation doesn’t land the way it should.)  We do get some sci-fi spectacle as the show goes on (I was very pleasantly surprised to see those huge robots duking it out, just like in the comics!), which made me happy (though even when we got some spectacle in the final episodes, the visual effects didn’t feel to me like they held up with the level of spectacle we’re more used to seeing on prestige TV these days.  This looked a little too much like a show made in the early aughts for my tastes.).

The show also makes the choice to have the girls a little more at odds with one another in the second half of the season than I’d expected.  I think the show works best when the kids are working as a team.  I do understand why they made the choices that they did; I can see the benefits of a little more drama and tension added into the storytelling.  However, I was pleased that by the end of the eighth and final episode they had brought the girls back together as a unit.

I wish there was more.  Paper Girls isn’t perfect, but it’s a strong and original story with terrific characters.  It bums me out that Amazon cancelled this show.  This could have been a great one had it been allowed to tell its complete story.