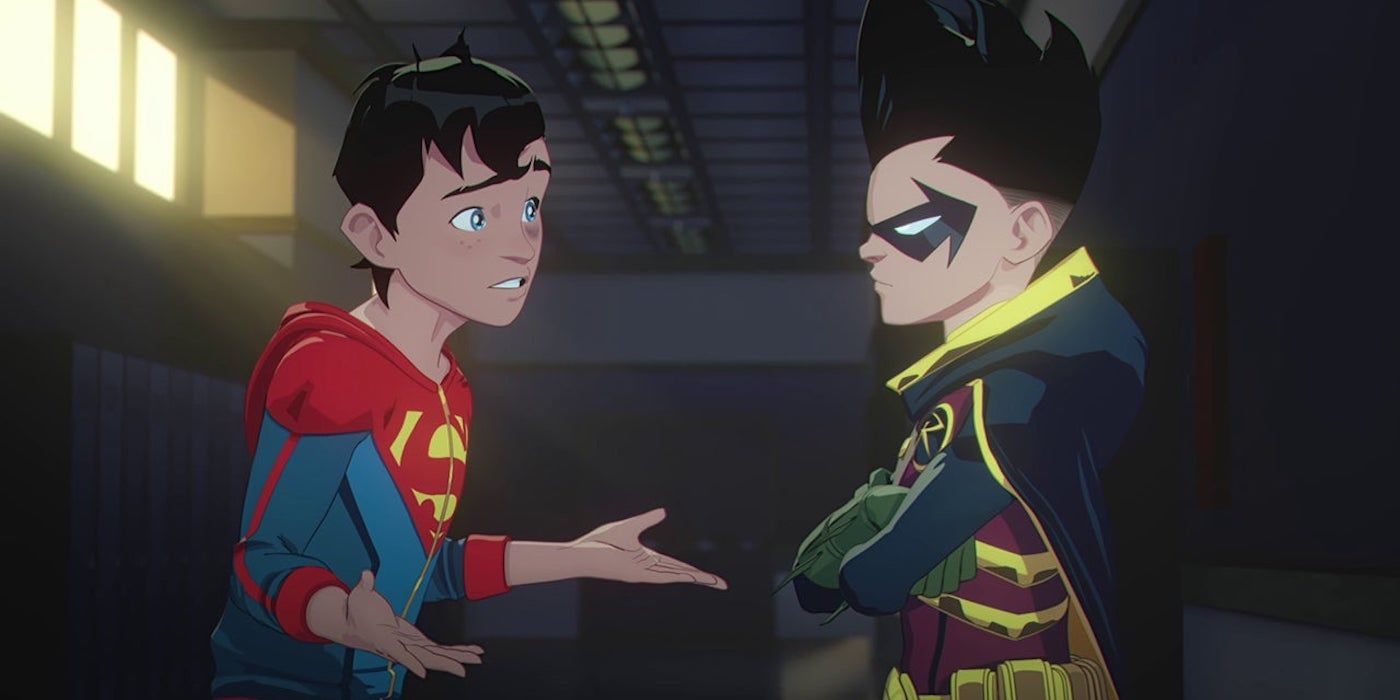 The latest DC direct-to-blu-ray/DVD animated film, Battle of the Super Sons, is a surprisingly entertaining action/adventure yarn with solid animation and fun, interesting characters.  It’s one of the best DC animated films in years.  I would not have guessed that I would have so enjoyed a film focusing on the tween children of Batman and Superman!

The film is inspired by the recent popularity of the Super Sons comic book series, written by Peter Tomasi and illustrated by Patrick Gleason, Jorge Jimenez, and others.  The film, like the comic, explores the odd-couple pairing of Jonathan Kent and Damian Wayne.  When we meet Jonathan at the start of the movie, he’s a carefree, fun-loving kid being raised in Smallville by Clark Kent and Lois Lane.  He doesn’t even know his father is Superman!  But when he starts exhibiting powers, Clark gives him “the talk”.  Clark turns to Bruce Wayne/Batman for help in analyzing his son’s developing powers.  There Jonathan meets the brooding Damian Wayne, who was raised to be an assassin by Talia al Ghul before Bruce took him in.  The two start off butting heads, but when something happens to Batman, Superman, and the other heroes, Jonathan and Damian find they have no one else to turn to but one another as they attempt to survive and, just perhaps, save the day.

Battle of the Super Sons is a pleasingly stand-alone tale.  This is not connected to the continuity of any other of the DC animated films.  The film does a great job at setting up the characters and status quo (though perhaps newbies could have used a little more insight into Damian’s complicated background) and then launching Jonathan and Damian on their adventure.  I was very pleasantly surprised how much fun I found this story to be!  Though it focuses on two kids, it’s not a dumbed-down kiddie story.  It’s a great example of an all-ages adventure that can, I think, be enjoyed by kids and adults alike.

I was worried by some dodgy CGI in the opening sequence, set on Krypton, but after that I was quite impressed by the great-looking character designs and the smooth animation.  I thought the characters’ facial animation was particularly strong.

I was surprised that the film starts with Clark’s origin on Krypton.  I’m not sure yet another depiction of this famous origin story was necessary, but it’s fun to see a new take on it, and I liked getting to see both Clark and his son Jonathan’s origin stories in the film.

I loved the fun, retro, comic-book-style opening credits and summary of Clark/Superman’s journey into super-heroism and then fatherhood.  (I particularly enjoyed seeing several homages in that sequence to 1978’s Superman: The Movie in the images of young Clark playing football, the death of pa Kent, etc.  Those homages pleasingly continued throughout the film, as we see Kryptonian crystal technology, a reference to “the 28 known galaxies” and, my favorite: a funny parallel to the scene in the film in which a young kid (actually young Lois!) sees Clark’s super-speed, though this time it’s Jonathan Kent and the kid was on a plane, not a train.  That was lovely!)

I really enjoyed the time the film spent on Jonathan’s discovery of his powers.  I really liked the fakeout at the baseball game (when we expect Jonathan’s super-powers to kick in).  There was beautiful animation on the first flight sequence with Jonathan and his dad.

I’m impressed with how the film got me to like and care about both Jonathan and Damian.  They allow Jonathan to be noble and innocent without being a one-dimensional bore.  And even more impressively, they allow Damian to be an arrogant little twerp, and then gently show the softening of his hard edges.  It’s very well done.

While the film focuses strongly on Jonathan and Damian, we also get to spend a good chunk of time with Superman and Batman, and they are perfectly depicted.  The designs look great (distinct while also maintaining each character’s “classic” look) and both were perfectly in character throughout the film.  I really liked how the film depicted their strong friendship, despite their differences.  (Clark’s reaction when Jonathan suggests they should help Batman in a fight is hilarious and spot-on.)

The voice cast is strong, as is almost always the case for these DC animated films.  Jack Dylan Grazer (It, Shazam!) and Jack Griffo are both perfect as Jonathan and Damian.  Just as great are Travis Willingham and Troy Baker as Superman and Batman.  Laura Bailey plays Lois Lane, Darin De Paul plays Lex Luthor and Starro, and Tom Kenny (SpongeBob Squarepants) plays Green Arrow, and they’re each of them terrific.  Other than Jack Dylan Grazer, this is a less-famous voice cast than we have usually tended to see in these DC animated films.  But these are, to the last, terrific performers who contribute wonderful, iconic vocal performances in the film.  It’s very impressive.

I really enjoyed this fun, entertaining adventure!  It was light without being too kiddy, and exciting without being too dark and grim.  I really liked all the main characters, particularly Jonathan and Damian.  I’d love to see a sequel!