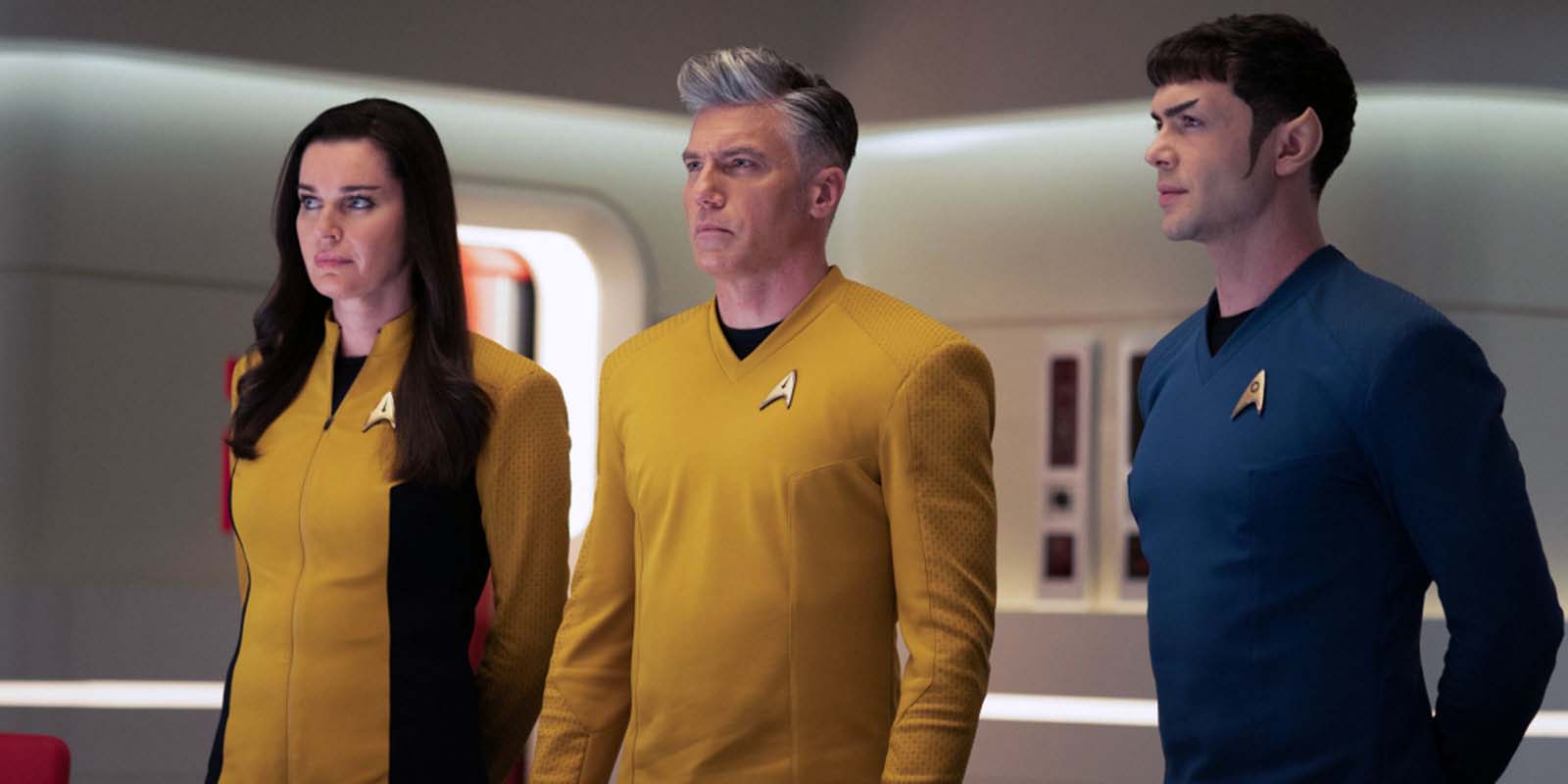 The latest Star Trek live-action TV series, Star Trek: Strange New Worlds is another prequel, this time set in the time just before the events of the Original Series.  We’re on board the U.S.S. Enterprise, but it’s in the days before Kirk was captain.  The captain is Christopher Pike, as depicted in the original Star Trek pilot “The Cage”.  (That unaired pilot was eventually repurposed as a two-part flashback episode of the Original Series called “The Menagerie.”)

Strange New Worlds features Captain Pike and his first officer (called only “Number One” in “The Cage”/”The Menagerie,” but here called Una, in accordance with Trek fans’ unofficial continuity), with Spock on-board as science office.  This trio of actors (Anson Mount, Rebecca Romijn, and Ethan Peck) played these characters on season two of Star Trek: Discovery.  They were the best things about that season — particularly Anson Mount as Captain Pike.  Fans asked for a spin-off series, and the folks at Paramount have apparently obliged.

In general, I don’t like prequels.  I’d prefer that new Trek shows take place AFTER what’s gone before.  On the other hand, if I could step back from my strong dislike of almost all modern Star Trek produced under Alex Kurtzman’s Secret Hideout production company, I would be all-in on the idea of a Trek show set in the era of “The Cage”/”The Menagerie”.  This is an unexplored era of Star Trek, and Captain Pike is a potentially interesting character, and I could see a fun TV series made from this premise.  On the other hand, I cannot forget my dislike of modern Trek produced by Mr. Kurtzman, and the launch of this show is already shackled for me by many of the terrible decisions made by Star Trek: Discovery.  Strange New Worlds is a second TOS-era Trek show (like Discovery) made by people who seem to have little knowledge of or affection for the Original Series.  That’s evident in almost every design choice made for Discovery — much of which is carried through to this new show.  This Enterprise looks almost nothing like the classic TOS Enterprise.  The exterior is all wrong.  (The nacelles are wrong, the nacelle struts are wrong, the weird dull grey look of the ship’s hull is wrong…)  And the interiors are even worse.  The bridge of the Starship Enterprise is one of the most iconic locations in all of TV and sci-fi history.  But the Enterprise bridge seen here doesn’t look anything like it.  (Same goes for the Enterprise transporter room, or sickbay, or engineering, or the corridors…)

I guess I could understand someone who things that the TOS look wouldn’t fly for modern viewers.  Let me be clear: I think that opinion is 100% wrong.  I think the classic TOS look, with just a little modernization such as actual computerized graphics on the computer screens, would look AMAZING today, brought to life with modern production values.  Star Trek fan films like Star Trek: New Voyages and Star Trek Continues, produced by fans on a shoestring budget, looked terrific — an actual professional production staff and budget should be able to be even more terrific.  But, OK, even if I think this opinion is dumb and wrong, I can understand why some might think that.  But if you DO think that, then WHY make a Star Trek show set in this era???  Set it in a future era and you could have the freedom to create whatever look you’d like!  It’s not that the design on Discovery or Strange New Worlds is terrible, it’s just that it’s all wrong for TOS.

So this hobbles the show for me right out of the gate, and sets my teeth on edge as someone who loves and respects TOS.  This is very, very hard for me to get over.

I did do my best to open my heart and approach this new show with an open mind, as I always try to do.

I was pleasantly surprised that I enjoyed these first five episodes more than I’d expected to.  They’re certainly better than almost anything I saw on Discovery or Picard.

I like the cast.  Anson Mount in particular is a terrific lead and he’s already established himself as a likable, iconic Star Trek captain.  I like the decision to return to Star Trek’s classic style of episodic storytelling, with a balance that certain character threads connect from one episode to the next.  The show is serious but has a lighter, more playful approach than the all-too-dour Discovery.  All five of these first episodes had at its core a story that I found interesting, and all five episodes found the time to incorporate lots of fun little character moments into the larger story.  While many of the design choices are terrible, the actual production values of the show are terrific.  It’s fun to see Star Trek visualized on such an expansive scale.

All of that is good!

The show has two main weaknesses, in my opinion.  First, the continual continuity problems bug the heck out of me.  Even when they’ve done a great job in creating (or recreating) characters, such as Uhura or the security officer La’an, their storytelling is beset by continuity problems that pull me out of the story.  (The idea that Spock served alongside a descendant of Khan, and that never came up, even when battling Khan in “Space Seed” or Star Trek II, is silly.  The idea that Spock served alongside James T. Kirk’s brother Samuel Kirk, and that never came up, even when Sam Kirk died in “Operation: Annihilate!”, is ludicrous.  Not to mention things like: why is M’Benga Enterprise CMO here when he was subservient to Dr. McCoy on TOS?  Why is this Christine Chapel so different from the stoic, internal character from TOS?  Why is Kyle already Enterprise Transporter Chief in this era, when it feels like he’s way too young?  Why is Uhura already on the Enterprise here, long before she should be?  Etc. etc. etc.  All of these attempts at fan-pleasing connections wound up being incredibly frustrating too me, an actual long-term Star Trek fan.  I wish they’d just made all of those characters into NEW characters as opposed to trying to bring in pre-existing ones.)  Second, there’s a laziness to the storytelling that has afflicted most modern Trek that continually rears its ugly head here.  The writers can’t seem to be bothered to properly explain many of the events we see happen in each episode.  Things are just thrown out or waved away in a silly or fantastical way, with little attempt to ground the series in actual science-fiction story-telling.  You’ll find lots more examples of this in my episode-by-episode breakdowns, below.

So… in conclusion… I found some enjoyment in each of these first five episodes of Star Trek: Strange New Worlds.  But it’s a bummer to me that “OK” is as good as modern Star Trek seems to get these days.  I long for better.

If you’d like more, buckle in for my episode-by-episode breakdown of these first five episodes:

I’m enjoying SNW more than I’d expected to so far, even while continuing to see so many of the problems that have plagued all the modern Star Trek shows (except Lower Decks).  I’m interested to see how the back half of this first season goes…!