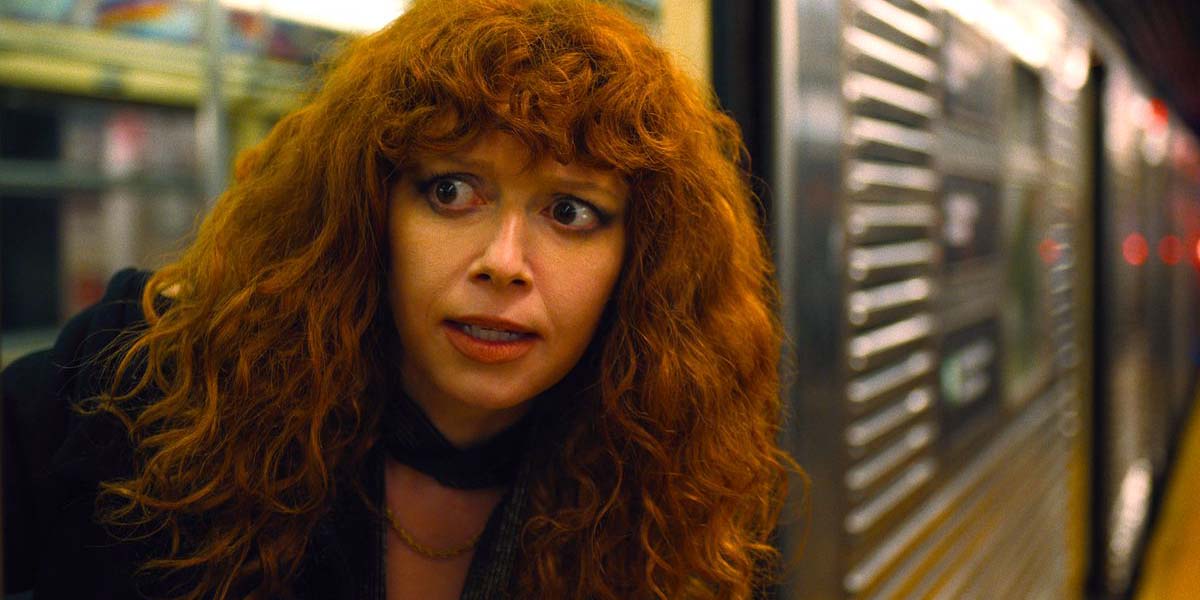 I loved the first season of Russian Doll.  I thought it was a wonderful concoction: a thrillingly head-spinning show that combined fun sci-fi concepts with moving character drama.  And it was very funny!  Natasha Lyonne was spectacular in the lead role; it felt like the part she was born to play.

I thought the first season was a perfectly satisfying complete story.  I didn’t need another season.  But having enjoyed that first season so much, I was excited and curious when a second season was announced.

This second season is set three years after the first season.  Three years exactly, as we’re again meeting Nadia on her birthday.  This time it’s her fortieth, and she winds up once again involved in a situation that bends space and time, albeit in a very different way than the time-loop scenario from season one.

I’m glad this new season has allowed the characters to age and grow, as opposed to taking place immediately after the end of season one.  (Though perhaps I should remove the word “grow” from the previous sentence, as both Nadia and Alan seem disappointingly stuck in not-so-happy situations that don’t seem to be dramatically improved from where we last left them.  I understand this as a storytelling choice — we need story material for this new season, and perhaps the show is also making a broader statement about how hard it is for human beings to actually make significant changes to their lives.  But after going on such an emotional journey with these two in season one, as a viewer I was hoping those adventures had resulted in a slightly happier ending for them.)

I was also glad the new season does not create another time-loop.  Instead, they made the correct choice to present another time-bending story, but one that works quite differently from the Groundhog Day-like situation from season one. I’m glad to see the show going in new directions while still finding a way to continue the sci-fi, time-twisting shenanigans.

Unfortunately, while I enjoyed this second season, I didn’t think it worked nearly as well as the first season.  It’s perfectly interesting and enjoyable, but nowhere near the masterpiece level that I thought season one achieved.  There are a few problems, I think.  The first is that I found this season far more dour than season one.  I missed the spark of the comedy and the joy that wove throughout season one, even when the show delved into some very serious psychological matters. Second, one of the great delights for me in season one was how, in the second half of the season, the show became a two-fer as we followed both Nadia and Alan through the adventure.  This season felt unbalanced.  Charlie Barnett is back as Alan, but his story gets only a fraction of the screen-time that Nadia’s did.  I’ve read that this might have happened because Mr. Barnett was working on another show; whatever the reason, I missed Alan for long stretches of the season, and I felt his story was significantly short-changed.  I needed more time to better understand and get emotionally involved with the situation with Alan’s mother.  And I wish the season had allowed Nadia and Alan to spend more time together and work together more.

I also feel that the train device didn’t quite work as well as the backbone of the season’s time-twisting narrative.  With Nadia being able to choose when to go back in time, this season didn’t have the intensity or momentum of the previous season, in which Nadia was trapped in the time-loop and eventually had to face the ticking clock of escaping before the universe collapsed.  There were a few times this season when I thought Nadia would get into serious trouble in the past (particularly when she finds herself having to dodge Nazis), but always it seemed that she didn’t have too much trouble getting out and returning to her present day when she chose to.  I also didn’t quite understand Nadia’s plan to try to change her mother’s fate.  That worked emotionally for me, but plot-wise it didn’t fit together.  It seemed obvious to me that Nadia’s actions wouldn’t succeed in changing the timeline, and indeed I was correct.

On the other hand, I loved that the series decided to really dig into Nadia’s complicated relationship with her mother, who was mentally ill.  This was an interesting aspect of season one, and I loved the choice to take a deeper dive into her mom’s story here in season two.  I was glad to see Chloë Sevigny back in the role of Nadia’s mom Lenora.  It was fascinating the way the show allowed Nadia to Quantum Leap herself into her mom’s body, literally walking in her shoes, so that she could better understand her mom and what she’d been through.  One of the most riveting moments in the series was when Nadia finds herself getting sucked into her mom’s madness as she starts to experience how her mom sees the world, and how disorienting that can be.

Natasha Lyonne is once again terrific in the lead role as Nadia.  I love the way she plays this character with such stubborn fearlessness.  It’s interesting to get to peel back even more layers of the onion of this young woman.

I loved that the show went beyond just Nadia’s mom to also explore her grandmother, Vera.  One of my favorite aspects this season was how Nadia’s story became more of a generational one, as we saw the struggles and failed dreams of three generations of women in her family.  (I really perked up when the show suggested that perhaps Vera had also had time-bending experiences, similar to Nadia’s.  I wish the show had done more with that awesome concept.  I’d love to see this further explored if we get a third season.)

I was also pleased to see the show dig deeper into Nadia’s relationship with her therapist and surrogate mom, Ruth.  Elizabeth Ashley (Treme, Better Things) returns and is again delightfully warm and unflappably tough as Ruth, and I loved that Annie Murphy (Schitt’s Creek) played a young version of Ruth in the past!  That was a fun surprise.  Ms. Murphy was terrific.

Nadia’s Jewish heritage was an important part of season one, and I was happy this was again the case here in season two, as Nadia finds herself trying to track down the treasure that the Nazis stole from her Jewish Hungarian ancestors back in the forties.  This gives a welcome depth and resonance to the sci-fi twistiness.

I was happy they found a way to work Harry Nilsson’s “Gotta Get Up” — such an important musical element in season one — back into this season before the end!

So, OK, season two of Russian Doll wasn’t the masterpiece that season one was.  Nevertheless I enjoyed these seven new episodes.  I hope this isn’t the end.