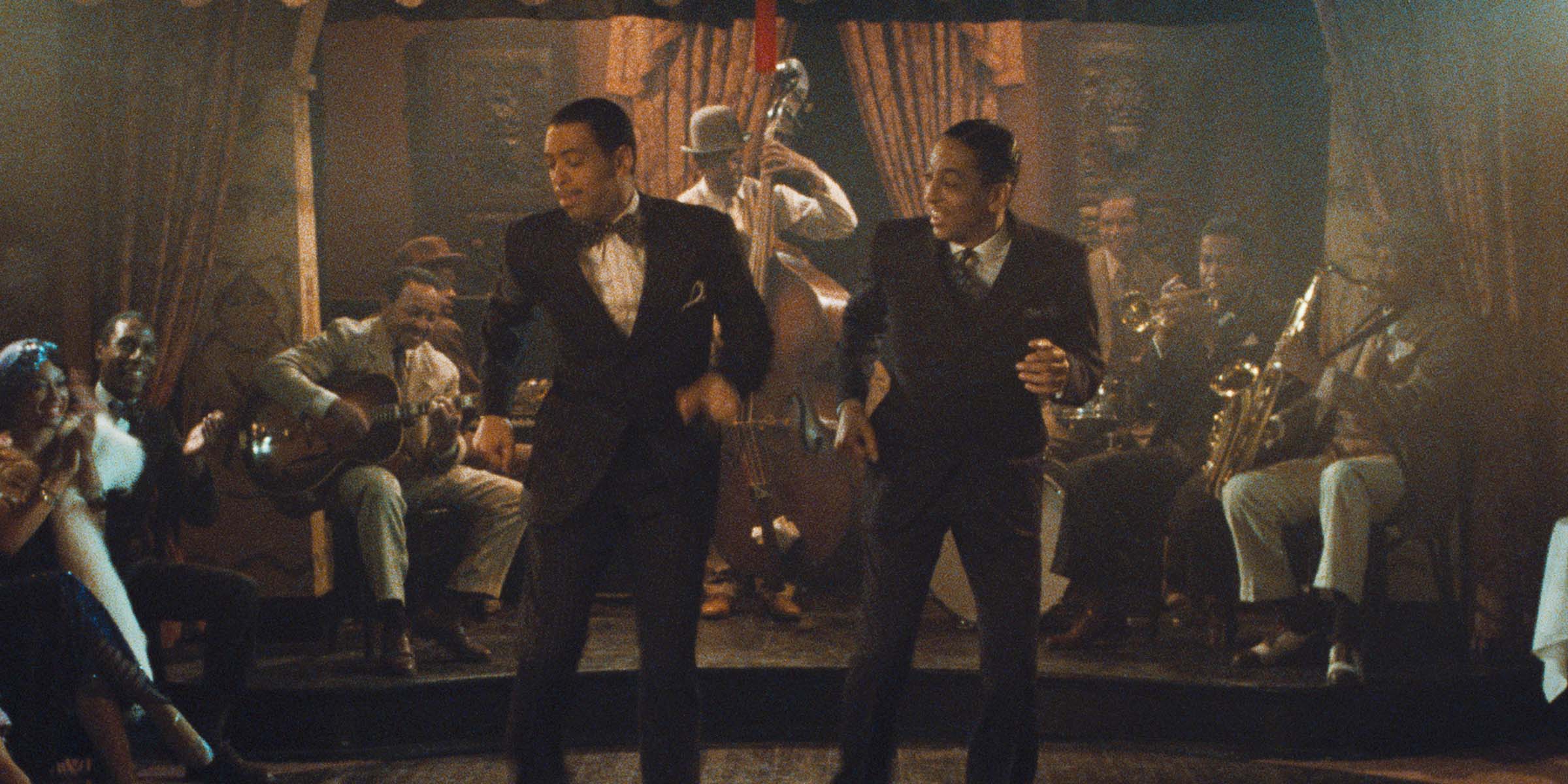 After watching The Outsiders and Rumble Fish, two 1980’s films directed by Francis Ford Coppola that I’d never before seen, I decided to move on to The Cotton Club, Mr. Coppola’s 1984 film set in and around the real-life Harlem nightclub, where African-Americans performed on-stage but weren’t allowed in the audience.  I watched Mr. Coppola’s 2019 recut version of the film, The Cotton Club: Encore.  I think it’s fun to see how Mr. Coppola has been putting a lot of energy, in recent years, into recutting and revising several of his earlier films that he didn’t feel came out quite the way he wanted.  He’s released his “Final Cut” of Apocalypse Now, a reworked version of The Godfather: Part III now called The Godfather Coda: The Death of Michael Corleone, an updated version of The Outsiders: The Complete Novel… and in 2019 he released this major reworking of his infamous 1984 flop.

I’ve been reading about the contentious production of The Cotton Club, and the stores are wild.  One of the financiers was murdered!!!  After making a career of standing up against disruptive studio notes, Mr. Coppola now freely admits that he caved to the pressure to edit his film to conform with the complaints he received: “Too long.  Too much music.  Too many black people.”  (Click here and here for more information on the tumultuous process of making and releasing the original cut of The Cotton Club.)  The film was conceived as depicting two parallel stories: one following white musician Dixie Dwyer (Richard Gere) and one following African-American tap-dancer “Sandman” Williams (Gregory Hines).  However, in the film that was released originally, the African-American half of the storyline was cut down significantly, as were the film’s many elaborate musical numbers featuring the African-American performers of the Cotton Club.  (I see pretty much only white faces on the film’s theatrical poster.)  For this Encore version, Mr. Coppola has gone back in and removed about 13 minutes of footage, while adding in about a half hour of new footage, restoring the balance to the film as well as much of the musical performances that lie at the heart of the film.

I think it’s fantastic that Mr. Coppola is able to present to audiences his ideal versions of these films that were so close to his heart.  It can be dangerous when a filmmaker muddles with their movies decades later.  But none of these films that Mr. Coppola is going back to rework can be considered classics (well, except for Apocalypse Now).  These were mostly movies about which the general consensus seems to be that they didn’t altogether work in their original cuts.  And most of these films seem to have had difficult productions, which had an impact on Mr. Coppola’s ability to deliver a finished film that lived up to his vision.  And so these feel like cases where, far from being a negative, I think it’s a great thing that Mr. Coppola has been given the opportunity to go back and rework the films.

I am very glad to have seen this new version of The Cotton Club, even though I didn’t altogether love it.  From everything I’ve read, Mr. Coppola’s changes seem like positive changes.  (I’ve never seen the original theatrical version.)  And yet, I must admit that I still felt that The Cotton Club: Encore was one of Mr. Coppola’s weaker films.

It took me quite a while to get into the film and the characters.  I found the first forty-or-so minutes of the film to be very hard to follow.  (This was a problem throughout the film, in my opinion, but particularly damaging at the beginning when I was trying to get into the movie.)  The film seemed over-edited, rapidly shifting between scenes and characters.  Watching this first act, I couldn’t believe this was made by the same director who made The Godfather, The Conversation, and Apocalypse Now.  Those movies had the patience to introduce the characters and gently (but confidently) draw the audience into the story.  But the first act of this movie felt like the movie was impatient with itself, and quick-edited into near incomprehensibly.  Were these fast cuts innovative for 1984?  Maybe!  (Or was this a negative change made for this 2019 re-edit?)  Either way, I found it super hard to follow and off-putting.  Was the goal to drop us into this world in an immersive way?  That’s a cool idea, but in reality I found the film distancing because I had a hard time following who was who, and trying to understand what the relationships between the different characters were.

There are a number of interesting stories in this film: the struggles of African American artists trying to work in a world controlled by white people; a naive young musician (Richard Gere’s Dixie) getting sucked into the dangerous world of gang violence after he saves the life of a mobster (James Remar’s Dutch), not knowing who he was; two brothers (Gregory Hines’ Sandman and Maurice Hines’ Clay) whose close relationship fractures when one brother tries to create his own solo dance act; a half-black, half-white young woman (Lonette McKee’s Lila) trying to balance those two worlds; and more!  But I was disappointed that the movie — despite being well over two hours long — didn’t explore any of those stories with the depth I’d hoped for.  There’s a lot of plot in the film, but most of it felt rather superficial to me, because we didn’t get too deeply into any of the characters.

The movie felt long to me in a way I never felt about many of Mr. Coppola’s other, far-lengthier epics (The Godfather films, Apocalypse Now, etc…)  I loved seeing all of the African American song and dance numbers at the Cotton Club.  But at the same time, I felt those sequences slowed the movie down.  Every time I thought the movie was about to build up some momentum, one of these musical interludes would come along — or one of the film’s time-jumps — and diffuse the tension.

The cast is strong.  Gregory Hines is spectacular as Sandman Williams.  Mr. Hines is a wonderfully naturalistic dramatic actor, and I love that the film takes the time to showcase his incredible dancing talents.  (I particularly enjoyed his song and dance number at the church, when he’s trying to impress Lila.)  Mr. Hines’ brother, Maurice Hines, is just as great playing Sandman’s brother Clay.  Their scenes together were my favorite moments in the film!

Richard Gere is solid as Dixie, though ultimately I found myself far less interested in the story of this white guy than I was that of the many African American characters.  It doesn’t help that Dixie is rich and famous for much of the second half of the film, and never seems to be in any jeopardy despite repeatedly mouthing off to the gangster Dutch.  So I wasn’t that worried about him!

It’s fun to see several great actors return from previous Francis Ford Coppola films.  Diane Lane was a highlight in both The Outsiders and Rumble Fish, and she’s once again a luminous screen presence here, as Vera Cicero, the woman caught between the musician Dixie and the mobster Dutch.  Ms. Lane’s charisma once again shines through the screen.  I wish the film explored her character deeper.  What does Vera really want?  Does she feel anything for Dutch, or is she just using him as a way to get her own nightclub?  Nicolas Cage was a fun standout supporting player in Rumble Fish, and he’s solid here as Dixie’s reckless and ambitious brother Vincent.  Mr. Cage brings a danger and unpredictability to his performance that makes him perfect for Vincent — neither Dixie nor the audience knows quite what Vincent is going to do next, and that raises the temperature on the proceedings.  Laurence Fishburne, so memorable in Apocalypse Now (and he also had a small role in Rumble Fish), makes quite an impression in his small role here as gangster Bumpy Rhodes.  He has some of the best lines in the film, particularly his critical speech to Dixie late in the film: “That is where I dance — where do you dance?”

The great Bob Hoskins is terrific as the suave mobster Owney Madden, who owns the Cotton Club.  Fred Gwynne (most known for his work in The Munsters, and here looking a heck of a lot like Elliot Gould), is terrific and extremely memorable as Owney’s partner Frenchy Demange.  Lonette McKee is terrific as the bi-racial Lila.  She’s beautiful, and she demonstrates her spectacular singing abilities in several fantastic musical sequences in the film.

* One of my favorite moments in the film was this exchange between Sandman and Lila: when she tells him of her dream to do Broadway, Sandman is dismissive, commenting: “You want to do white show business”.  Lila replies: “Well, isn’t that’s what it is?”  I wish the film had dug deeper into Lila (and the other African-American artists)’s struggle to make it in the white world, and the tensions that might have caused her within the black community.

* The Blu-ray Disc art for The Cotton Club: Encore is weirdly just as unbalanced as the original theatrical poster was, just in the opposite direction.  The original poster focused on the white characters, while the new artwork depicts the African-American Sandman and Lila.  So I was surprised, when watching the movie, that Richard Gere had such a large role!

* I loved the scene in which a group of older African American dancers show off their moves at the “Hoofers’ Club”.

* There’s some gross behavior towards women in the film, most notably the scene in which lead character Dixie torments Diane Lane’s Vera on the dance floor, slapping her and dragging her around.  Dixie also refers to himself as “Dutch’s nigger” at one point.  This is period-specific stuff and I don’t object to those moments being included in the film, but they’re tough to watch.

* Probably the best edited sequence in the film comes very near the end, as the murder of Dutch is intercut with a performance of Sandman’s dancing.  It was very reminiscent of the classic montage that ended The Godfather.  I wish the rest of the movie was as confidently made.  It also would have helped if that sequence — which evokes a mythic tragedy — was about the death of a character we liked, rather than the dangerous and monstrous Dutch!  The film feels like it wants to be an epic tragedy, but it all wraps up in a surprisingly happy ending.  I was let down that the film didn’t explore the narrative opportunities whose potential I felt was there.  Lila is never really forced to choose between the white and black world.  Dixie never suffers any comeuppance for challenging Dutch, nor does Sandman see any downside to betraying his brother.

* I did love the very theatrical final sequence, in which all of the film’s main characters — including an ensemble of dancers! — pass through a train station.  That was very clever and unusual.  It felt very much like a play.  (In fact, much of the film felt to me like it was structured like a play.  There could definitely have been an “intermission” break right before the mid-movie time and location jump into Vera’s nightclub.)

As with all of Francis Ford Coppola’s films, there’s a lot to unpack in The Cotton Club, and there is a lot of great work on display on-screen.  Unfortunately, in my opinion, the film’s elements doesn’t come together into a satisfactory whole, even in this extended Encore version.  Still, I’m glad to have seen it…!

Please support this website by clicking through one of our Amazon links the next time you need to shop!  As an Amazon Associate, I earn from qualifying purchases.  That means I’ll receive a small percentage from any product you purchase from Amazon within 24 hours after clicking through.  Thank you!