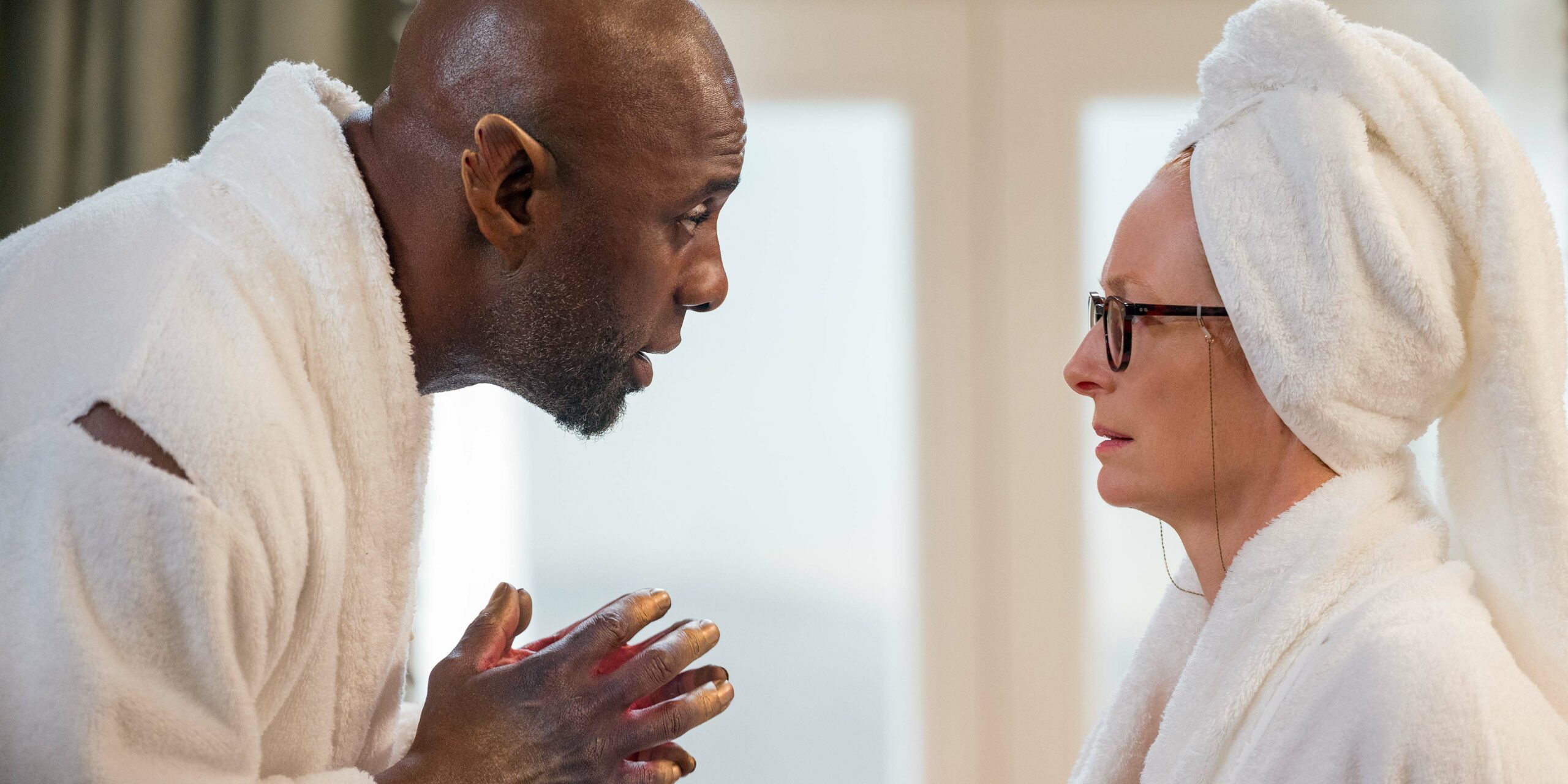 In Three Thousand Years of Longing, Tilda Swinton plays Alithea, a British academic.  She’s a “narratologist,” someone who has devoted her life to the study of stories.  Her solitary life is interrupted when she encounters a Djinn (Idris Elba), who offers her three wishes.  The two engage in a protracted debate about the nature of desire and wishes.  The Djinn tells her stories of the tragedies he’s experienced, and she gradually opens up to him as well.  Alithea is reluctant to make any wishes, as she’s savvy to the way these sorts of stories usually end in tragedy for the wisher.  But the Djinn beseeches her to wish, because if she doesn’t, he’ll remain in thrall to her forever.

A new film from director George Miller is always a cause for excitement.  2015’s Mad Max: Fury Road was an extraordinary achievement.  Three Thousand Years of Longing doesn’t rock on that level, but it’s an interesting and entertaining film.  I’m bummed it didn’t garner more notice when it was released earlier this year.

I enjoyed the way the film played with the idea of stories and storytelling.  I liked the structure of the narrative, which is broken up into a series of anecdotes as the Djinn recounts events from across his millennia of existence.  And I was amused that so much of the film consists of Alithea and the Djinn, both dressed in white fluffy hotel towels, just chatting.  That’s a bold, anti-action-movie approach, but it worked for me!  It helps that the chemistry between Tilda Swinton and Idris Elba is so much fun to watch.

Both Tilda Swinton (Moonrise Kingdom, The Grand Budapest Hotel, The French Dispatch, Doctor Strange) and Idris Elba (The Wire, Luther, Thor, American Gangster, Pacific Rim, Molly’s Game) are delightful in the leading roles.  I like the delicate way in which Ms. Swinton brings Alithea to life.  We can see that she lives a solitary life and we might suspect that something is missing for her, while at the same time Ms. Swinton allows Alithea to have dignity and intelligence.  And spunk, which shines through in her scenes debating the Djinn.  Idris Elba, meanwhile, is wonderful as the Djinn.  His physicality and his beautiful voice are perfect for this character.  I like the quiet gentleness Mr. Elba brings to his performance. We can tell his character possesses great power, but for the most part he keeps that restrained, coiled up inside.

As might be expected from a George Miller film, the production design is sumptuous.  The stories told in the film take place in a number of different location and time-periods, and I was always delighted by the depths brought to the realization of these different settings on screen.  (Sheba’s kingdom, including the many bizarre and unexplained fantasy creatures that inhabited it, is a stand-out favorite for me.  How great was that bizarre, living instrument that King Solomon plays to woo her?)

Recently I’ve been re-reading The Sandman by Neil Gaiman (in anticipation of checking out the recent Netflix adaptation), and this film quite reminded me of Mr. Gaiman’s Sandman stories.  As in The Sandman, this is a story that is about stories, one that is unafraid to present a variety of fantasy vignettes as part of a larger narrative.  This is also a universe in which fantastical, mythical creatures exist, hidden at the edges of our world, and one in which not all stories have a “happily ever after” ending.  There’s a darkness and a danger to this fantasy universe, as was the case in Mr. Gaiman’s Sandman stories.  I enjoyed that tone here very much.

I wish the film was able to build to a more heartbreakingly emotional climax.  With a title like this, and based on the stories being told throughout the film, it’s clear that this was intended to be a story about love and longing.  And yet I felt the film stumbled a bit in the last act, in which Alithea and the Djinn returned to Alithea’s London home.  I wanted to feel something more wrenchingly emotional in the climax, but the film never got there for me.  There’s some tragedy, but the film splits its hairs and winds up getting a little wishy-washy, which for me diluted the power of the ending.

(What do I mean?  Beware SPOILERS here — skip to the next paragraph to remain free and clear.  The film doesn’t adequately explain what happens to the Djinn and why he can’t remain in the mortal world.  He didn’t seem to have that problem in any of the film’s flashbacks.  And while it is sad when Alithea has to release him, because — as she herself correctly identifies — she’d wished him into loving her, it doesn’t feel like their relationship was real, and so its ending doesn’t pack the wallop it should for me as a viewer.  And then the film sort of takes back the sad ending, because we learn in the final moments that the Djinnis able to return periodically to see her.)

Still, I found this film to be an enjoyably original flight of fancy.