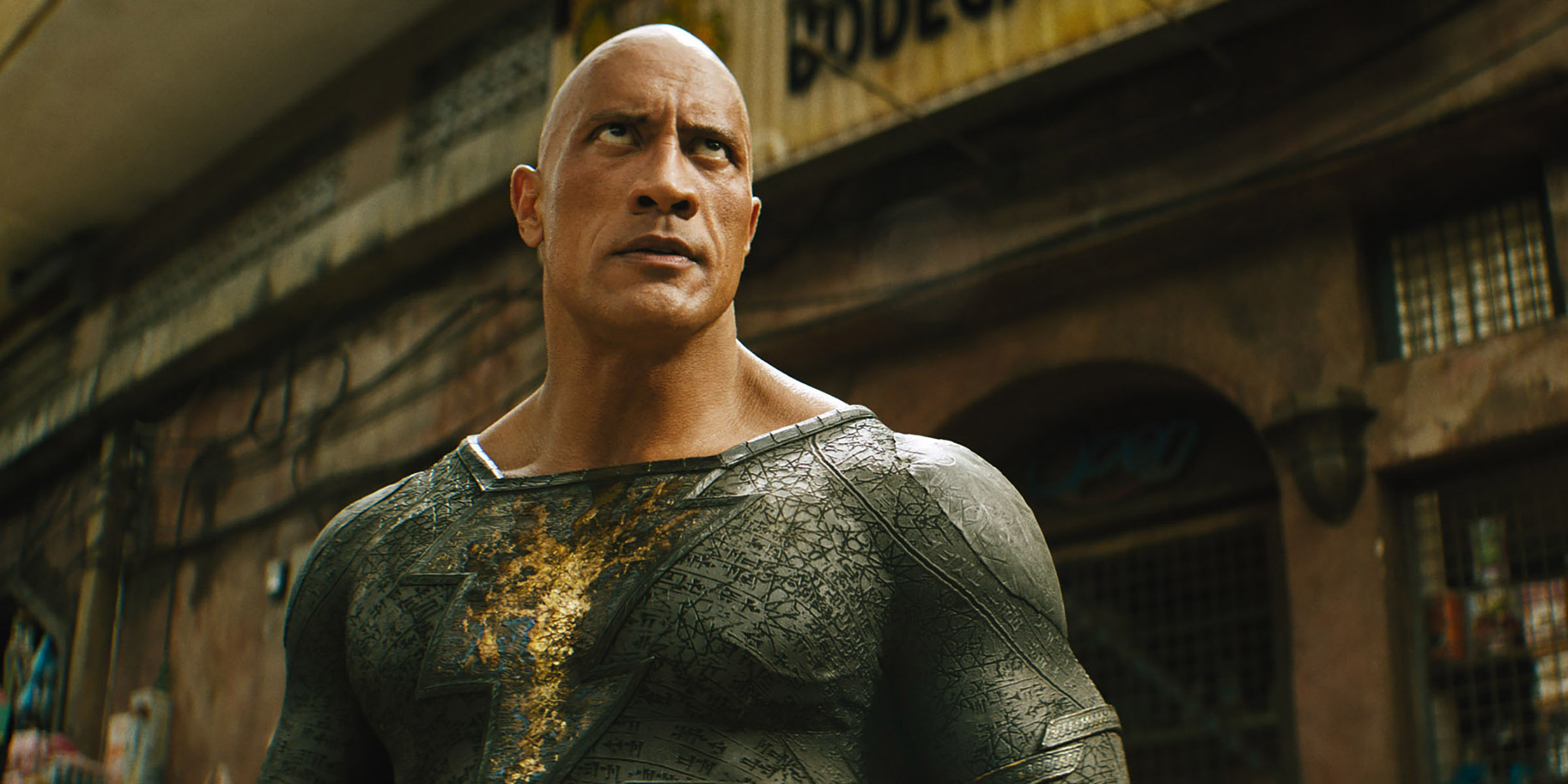 Black Adam is the latest DC universe movie to hit the screens, starring Dwayne Johnson as the titular villain/anti-hero.  In the fictional nation of Kahndaq, a woman and her friends wake up the superpowered Black Adam from the tomb in which he’s been trapped for thousands of years.  They want him to free Kahndaq from the Intergang mercenaries who control the country, but Black Adam isn’t at first much interested in their local problems.  Then a group of superheroes — the Justice Society — arrive in Kahndaq; they see Black Adam as a supervillain and want to take him out before he can get out of hand.  A battle royal in downtown Kahndaq ensures, but before long the superpowered enemies must grudgingly agree to work together, to face a common foe.

Black Adam feels to me a lot like 2016’s X-Men: Apocalypse.  That’s not a compliment.  Both movies feature some strong actors and characters from the comics who I was excited to see on screen, and yet both movies fail both the cast and the characters by burying them in a confusing-bordering-on-nonsensical story, in which things happen for little-to-no reason and few-if-any characters are given any depth or development.  Both films aim at an epic scale and are filled with lots of superpowered fights and explosions, but the effects range from great to weak and with no story with which to anchor the spectacle, it all feels hollow and boring.

It’s sort of sad to me that this is the movie that Dwayne Johnson has been trying to get made for well over a decade.  I think it’s cool that he loves Black Adam and wanted to play this character in a big movie.  I wish that a decade-plus of development would have resulted in a better movie.

The film has the throw-random-characters-at-the-wall-and-see-who-sticks approach that made me so often roll my eyes at the approach taken by Fox with their X-Men franchise.  I don’t see much rhyme or reason for the random collection of DC characters assembled into this film’s Justice Society.  Had the film actually developed these characters and given us reasons to like and care about them, maybe this could have worked.  But that doesn’t really happen; none of the four Justice Society characters are given much depth beyond a basic one-line description.  The film can’t even be bothered to explain what their powers or stories are.  Seriously, what are we to make of Hawkman in this film?  At one point he says that he’s not afraid of dying, which seems like a nod towards the character’s history of death-and-resurrection in the DC comics, but the movie doesn’t really tell us anything about who this guy is and what he can do.  There’s a line that his ship is made out of Nth Metal, but if you haven’t read the comics you have no idea what that means, and that Nth Metal never enters the story in any way.  (And his supposedly indestructible Nth Metal ship is torn in half fairly easily by the bad guy in the third act.)

Continuity has never been the DCEU’s strong point.  That’s putting it mildly.  Having Viola Davis back as Amanda Waller ties this film strongly to the previous DCEU films, but it feels superficial because we’re not actually seeing any characters or stories developed between the films.  (As I just described, it actually feels like a DIS-continuity to see the Justice Society working for Waller after what went down in The Suicide Squad.)  It feels like a continuity band-aid, like a way to tell the audience these movies are connected without actually doing the work to make them actually be smoothly connected.  So for me it’s frustrating, and part of me wishes they’d just let this film stand on its own.

Speaking of continuity snarles… this is a movie about a Shazam villain, and he’s basically wearing a black version of the Shazam costume… and we see Djimon Hounsou in a brief cameo, reprising his role as the wizard from the 2019 Shazam! movie.  So this movie is connected to Shazam! — it’s basically a spin-off!  Characters say “Shazam” all the time in this film… but not a single person mentions that a “good” version of this super-powered character already exists.  So in that respect, the film seems to go out of its way to ignore that Shazam! movie.  (And, of course, the mid-credits scene, which feels to me like it should feature Shazam and tee up a Black Adam vs Shazam showdown in a future film, features a different do-gooder super-hero about whom you might have read recently… More on that below…)  So the whole thing is very weird to me!

I wish the movie had a story that made sense.  There are SPOILERS ahead, gang, so beware from here on out.

Here are just a few threads one could pull on:

The Rock is a tremendous physical presence and his charisma is through the roof.  He certainly looks the part as Black Adam, and he’s one of those movie stars (like Sean Connery) which whom it doesn’t bother me that he’s speaking in his normal voice even when playing a character of a totally different nationality.  But Dwayne Johnson isn’t able to bring much depth to the character beyond what’s on the surface (and the movie’s script doesn’t help him at all).  I did like the fake-out regarding Black Adam’s origin (we get revelations towards the end that re-orient what we’d seen earlier in the film), but there’s just not enough meat on the bone of this character to make him work for me as the lead of a film (yet alone a franchise).

Aldis Hodge (One Night in Miami…) is a tremendous actor, and it’s fun to see him playing Hawkman.  I love that they didn’t shy away from casting an African-American actor as this usually-white character from the comics.  Mr. Hodge brings great dignity to the role, and a strong physical presence.  But as I’d commented above, there’s not enough character here, and the film does not succeed for me in setting up Hawkman and Doctor Fate as old friends and comrades-in-arms (which was needed in order for the climax to work).  There felt like zero chemistry there, at least to me.  I love Pierce Brosnan (I’m a staunch defender of his first two Bond films, GoldenEye and Tomorrow Never Dies) and I think he looks great as Doctor Fate.  I love this casting.  But something just felt off to me.  Mr. Brosnan is a terrific actor but he wasn’t able to make the character’s stiff dialogue sound real to my ears… and something about the CGI used to depict Doctor Fate felt not-quite-right to me; my brain kept telling me that it didn’t feel like Fate was actually there in a lot of his scenes.  (But I did love seeing that iconic Doctor Fate helmet!)

Quintessa Swindell gives their all as Cyclone (Swindell identifies as nonbinary) and they pop in the film better than most of the other characters.  But Cyclone still has almost zero of consequence to do.  Noah Centineo is also solid as Atom Smasher, but again there’s just very little to this character other than his being new and sort of bumbling.  (Mr. Centineo looks and sounds almost exactly like a young clone of Mark Ruffalo to me.  Am I the only one who noticed that??)  The film sort of maybe tries to establish some flirtation between these two young heroes, but (are you detecting a trend here) we don’t get any actual development.  Just a few dumb sort-of-jokes.  (This is a film filled with lines that I think were supposed to be funny but which did not land for me.  I think there were two jokes that I laughed at out of maybe a hundred.)

In terms of our Kahndaqi civilians, we get the heroine Adrianna Tomaz (Sarah Shahi); her son Amon (Bodhi Sabongui); and her brother Karim (Mohammed Amer).  All three actors are great.  I wish the movie allowed us to get to know their characters better.  I wish I had any idea what Adrianna’s character did/does.  She’s a teacher?  And a revolutionary/terrorist?  And an Indiana Jones-level archaeologist/adventurer?  This encapsulates the movie’s flaws.  Ms. Shahi is terrific on-screen; if the film had actually taken the time to properly establish her character and then give her some development, she could have been a wonderful non-super-powered anchor for this film.

I was not at all interested in the one-dimensional evil Ishmael (Marwan Kenzari) and the CGI devil-creature he turned into at the end.  He’s basically just a plot device there to give Black Adam and the Justice Society a common enemy.  (I enjoyed Mr. Kenzari’s work in The Old Guard; it’s a shame he wasn’t better utilized and developed into an interesting villain here.)

It’s been all over the news these past few weeks that Henry Cavill was reprising his role as Superman in this film’s mid-credits scene.  I wish DC/Warner Brothers had resisted the urge to blab that everywhere; it’d have been more fun to have been surprised by that.  It’s nice to see Mr. Cavill back in the role.  I like that they tweaked his look slightly, giving him the classic Superman s-curl and a slightly brighter-colored super-suit.  I loved hearing the classic John Williams theme accompany his reveal.  I’ve always enjoyed Mr. Cavill in this role, even if I have not much liked the films he’s been in.  I am happy to see him given another shot at Superman, and I hope we actually do get to see him in a new movie that’s somewhat more faithful to the optimistic tone of the character.  On the other hand, I am ready for these DC films to leave the Zack Snyder versions of these characters behind.  There have been rumors for years that the long-in-coming Flashpoint film might be used to erase/rewrite the DC movie universe and open the door for new versions of these characters.  On the one hand, with the recent news that James Gunn and Peter Safran are taking over the DC cinematic universe, it seems more likely than ever that the next few years will bring us a reinvention of these characters on screen.  On the other hand, bringing back Henry Cavill feels like a statement that they are continuing to maintain continuity with the “Snyderverse”, and I’m not in love with that.  (During the slow-mo violent action scene after Black Adam is awakened, in which he murders a huge group of Intergang thugs, I felt like I was right back in the Snyderverse, and it wasn’t a great feeling.)  It will be very interesting to see in what direction these DC films go in the coming years…

There’s also another big cameo in this film: Jennifer Holland pops up briefly as Emilia Harcourt, her character from The Suicide Squad and Peacemaker!!  This should have been amazing, but she’s in such a weird outfit that I didn’t recognize her at first… and then she’s gone so fast, without getting anything cool to do or even one funny line.  This was a great idea, but another missed opportunity in my opinion.  (Also, Harcourt turned against Waller, remember??  So it doesn’t make sense to me that she’d be running Waller’s secret prison… Ugh!!)

All right, time to wrap this up.  I wish I could report that I found more to enjoy in Black Adam.  It all felt rather B-level and uninspired to me.  I’m not filled with enthusiasm for more of this character.  I hope the folks at Warner Brothers can right the DC ship and start giving us higher quality DCU films before too terribly long…