Skip to the content
HomeMovie ReviewsJosh Reviews The Bubble 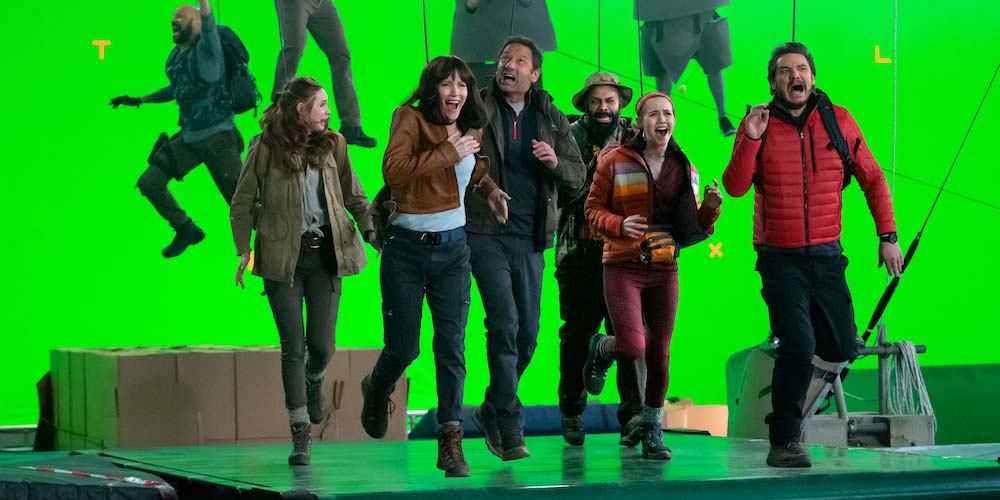 Judd Apatow’s film The Bubble chronicles the increasingly chaotic and unhinged situation on the set of a big-budget film, Cliff Beasts 6, attempting to stay in production during the pandemic.  The idea is that the cast and crew will isolate in a bubble in a lavish hotel, enabling the film — desperately needed by its struggling studio — to be shot safely.  However, the assembled cast & crew quickly start to drive one another crazy, and one setback after another threatens to drive everyone over the edge.

I’m a huge fan of Judd Apatow’s work — I’ve been a true believer ever since Freaks and Geeks — and I’ve enjoyed all of his movies, even some of his shaggier ones (hello, Funny People!).  I was excited by this new film’s premise and the terrific cast of comedic performers that Mr. Apatow had assembled.  However, while there were funny moments throughout The Bubble, I was surprised by how uneven and unfocused it felt to me.  The elements didn’t come together.

The film felt wobbly to me right from the first few minutes.  The movie opens with some awkward text pieces to set up the premise.  Right away that seemed like a flag; one would hope the actual narrative of the film would suffice to tell us everything we need to know to understand the film.  Also, the text suggested that we’d be watching a documentary about the fake film (Cliff Beast 6)’s troubled production, but the film isn’t structured as a fake-documentary at all.  (That fake documentary isn’t mentioned again until the movie’s closing minutes.)

Then we meet Gavin, the Cliff Beasts producer (played by Peter Serafinowicz), talking with two of the support team who are going to have to take care of all the actors in the bubble.  I thought this indicated that we’d be following the story, and looking at all the antics of the spoiled and pampered actors, through the eyes of these relatively “normal” people.  But the film doesn’t really take that approach; these support staff are important characters in the movie, but they don’t have nearly enough screen time to be considered lead roles.  Then, many minutes into the film, we get a series of scenes introducing us to one of the Cliff Beasts actors: Carol (Karen Gillan), who passed on Cliff Beasts 5 but is returning for this sixth installment because her previous film, in which she played a half-Palestinian, half-Israeli who fights aliens, bombed.  Is Carol supposed to be the film’s main character?  I think maybe she was, but as the film unfolds we’re away from her for huge swaths of time, and I didn’t feel that Carol had any sort of emotional arc in the film.

There are certainly films that don’t have one central “main” character, but are instead ensemble pieces.  But I think The Bubble would have benefited from a stronger central narrative or central character to anchor us or guide us through the film.  Because for me, The Bubble felt very unwieldy and unfocused, like a series of anecdotes.  Some were very funny, but the pieces didn’t fit together for me in a way that felt satisfying.  I find myself comparing The Bubble to Tropic Thunder, another comedic movie about a chaotic Hollywood production.  That film had a wonderful ensemble with many terrific characters, each of whom got plenty of screen time.  But the pieces of that film fit together in what was, for me, a much more satisfying way, and I think part of that was that Ben Stiller’s character functioned as a “spine” to the story to hold the many disparate pieces together.

Making fun of pampered Hollywood actors should be easy.  Taking aim at rich actors who think they’re making big-budget big-studio CGI movies because humanity needs them to feels like a fun idea for a movie.  (Indeed, Tropic Thunder minds a lot of comedic gold out of both of those notions.)  I’d have liked us to have been able to be more invested in these goofy, spoiled characters, so that when things get crazy we’d be either more invested in rooting for them to get through it, or we’d take more delight in watching them suffer.  The film exists in a weird middle ground in-between.  The film also lurches into some flights of fancy (such as the over-the-top security detail around the hotel that winds up shooting off someone’s hand at one point) that felt like “what the?” moments for me.  I’m all for a build-up of comedic insanity in a film like this, but I think the tone has to be handled better to make those events feel like they’re somewhat plausible, even if they’re ridiculous.

I wish I liked The Bubble more, because it boasts a fantastic array of talented performers!!  Karen Gillan (Guardians of the Galaxy) is strong as Carol Cobb.  She’s very endearing, particularly in the film’s early scenes as we come to understand that Carol is returning to the Cliff Beasts franchise with her tail somewhat between her legs.  (Ms. Gillan is hilarious in the flashback clips of Carol’s unfortunate Israeli-Palestinian-aliens movie.)  David Duchovny brings his A-game to the role of Dustin Murray, the Cliff Beasts leading man.  Mr. Duchovny is an underrated comedic performer, and he’s very funny in his laid-back, deadpan way here.  As an O.G. X-Files fan, I’m happy to see Mr. Duchovny used so well here.  Pedro Pascal (The Mandalorian) is funny as the sex and drug-obsessed Dieter Bravo.  He’s particularly amusing when we see shift into his Cliff Beasts character’s super-thick accent.  Leslie Mann plays Lauren van Chance, who has a complicated romantic history with David Duchovny’s Dustin.  She and Mr. Duchovny are a hoot together, and I laughed at the silly southern accent that Ms. Mann as Lauren puts on for her Cliff Beasts character.  Keegan-Michael Key is great jovial fun, as he always is, as Sean Knox, the Cliff Beasts star who has created a wellness business that he swears is not a religion or a cult.  Iris Apatow hits all the right notes as Krystal Kris, the Tik-Tok star cast in the Cliff Beasts film as an attempt to appeal to a younger demographic, and Galen Hopper is solid as Carla, the stunt coordinator’s daughter who becomes Krystal’s friend.  Fred Armisen has a lot of fun with the role of Darren Eigan, the indie film director tapped to help this latest Cliff Beasts sequel.  Guz Khan gets a couple of good moments as Howie Frangopolous, the high-strung performer cast as the Cliff Beasts comic relief character.  Kate McKinnon sinks her teeth into the role of Paula, the studio chief who needs Cliff Beasts 6 to happen, pandemic be damned.  Peter Serafinowicz (Guardians of the Galaxy, Spy, The Tick) plays Gavin, the producer trying to hold all of this insanity together; he might be my favorite character in the film.  I just love Mr. Serafinowicz’s deadpan energy.  Maria Bakalova (Borat Subsequent Moviefilm), Vir Das, Samson Kayo, and Harry Trevaldwyn are each strong as various support staff tasked with taking care of the Cliff Beasts cast.  Rob Delaney, Maria Bamford, John Lithgow, Daisy Ridley, James McAvoy, and John Cena all pop up for fun cameo spots.  Isn’t that an insanely talented cast??  They all do strong work; it just wound up all feeling somewhat superficial for me.  I didn’t care as much about any of these characters as I wanted to.  (And the film isn’t drop-dead hilarious enough to make me love it despite its thinly-sketched characters.)

Oh well!  This was a rare miss by Mr. Apatow.