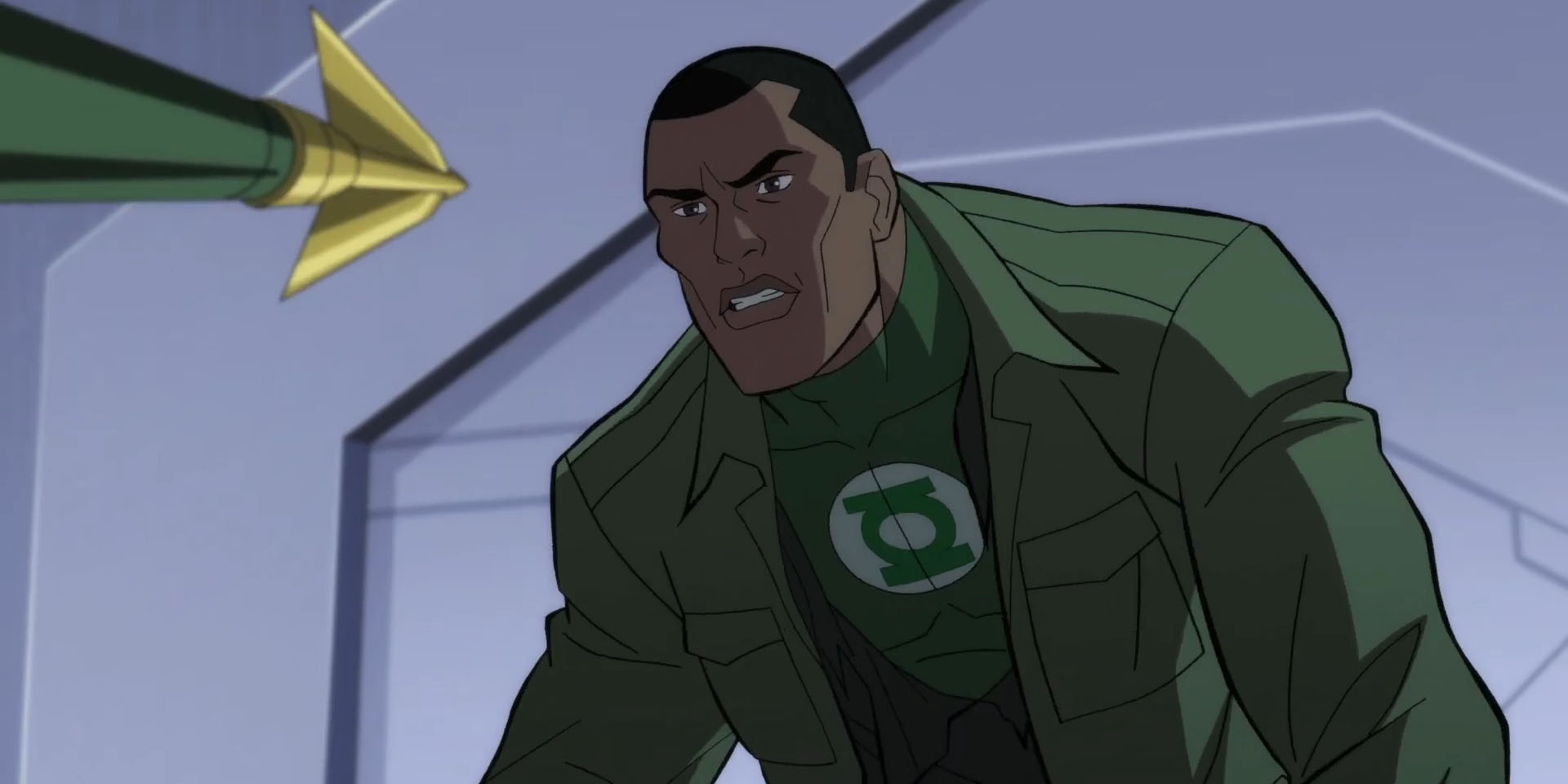 The new DC animated movie, Green Lantern: Beware My Power, introduces John Stewart to the new DC animated continuity.  As the film opens, we meet American military veteran John Stewart, who gets in trouble with the cops for violently confronting some ne’er-do-wells who are threatening a homeless man.  John’s horizons are quickly broadened when a dying Guardian from Oa gifts him with a Green Lantern ring.  John at first wants nothing to do with the ring, and he visits the Justice League looking for help removing the ring from his finger.  The League are shocked to learn that John’s new ring once belonged to Hal Jordan (meaning that Hal has died).  Hal’s good friend Oliver Queen (Green Arrow) sets out into space immediately, hoping to learn the fate of his friend Hal.  John tags along, hoping the Guardians will remove the ring so he can return to his normal life.  But, of course, the two Green super-heroes — soon after joined also by Shayera Hol, Hawkgirl — quickly find themselves embroiled in an interstellar adventure in which John just might learn that being a Green Lantern is his true path…

Beware My Power is a fun, entertaining animated film.  There’s nothing earth-shattering here.  Nothing in these new DC animated films seems to be able to match the highs for me of the great Bruce Timm DC animated series from two-plus decades ago.  I wish the story and characters in this film were a little better developed; a little more sophisticated.  But this a competently-made, well-animated new story and I enjoyed watching it even as it’s not a film I’ll be shouting from the rooftops about how great it is.

It’s terrific to see the African-American Green Lantern, John Stewart, being given the leading role.  It’s well-deserved.  I’ve always liked John in the comics, and I loved how John was such an important character in Bruce Timm’s Justice League animated series from the aughts.  John was iconically voiced by Phil LaMarr on the animated Justice League show.  Those are big vocal shoes to fill!!  But Aldis Hodge (One Night in Miami…) is terrific as the new John Stewart.  He’s able to capture John’s inherent dignity and intelligence.  He gives him a bit of a haunted and lost quality — John in this film is still struggling to make peace with his actions during his time in the military — and also a level of heroism that the character needs to be able to hit.

The 2020 animated film Superman: Man of Tomorrow kicked off a new continuity of DC animated films.  So far, this continuity has been very loose.  Man of Tomorrow appears to take place in the same universe as the subsequent films Justice Society: World War II, Batman: The Long Halloween, and now Green Lantern: Beware My Power.  (Batman: Soul of the Dragon, Injustice, and Catwoman: Hunted have been stand-alone films in their own continuity.)  But rather than getting a lot of characters crossing over, the main connection between these animated films has been their visual style.  It’s one that I quite like!  The animation has been smooth and I like the overall approach to character design.  There’s a stylized look with thick outlines around the characters that gives the films a pleasingly bold, graphic look… but there’s still plenty of detail in the images to give a grounded nature to what we’re watching.  It works nicely for me!

While John Stewart is the lead character, both Green Arrow and Hawkgirl have major supporting roles.  I really liked the dynamic between these three characters.  I think the film was at its best when we were watching them together (either bouncing off of one another or finding a way to work together).  Jimmi Simpson (The Newsroom, Westworld) is perfect as Green Arrow.  He’s got a great “every-man” quality to his voice, and that twinkle of good humor that’s so important for Ollie.  Jamie Gray Hyder is also very strong as Hawkgirl.  She brings a toughness and fierceness to Shayera, while allowing her core of honor to shine through.  (The Bruce Timm Justice League show spent a lot of time developing a romantic relationship between John Stewart and Shayera Hol, so I have a hold-over fondness to seeing those two characters together.  There was no romance between the two in this film, but I wonder if that’s a thread they’ll want to pick up in future stories…)

I liked the build-up in the first half of the film, as our heroes gradually become aware of a major intergalactic war (the Rann-Thanagar war; a major event from the DC comics) and start to piece together the twin mysteries of what started the war and also what happened to Hal Jordan.  There were some plot short-cuts in the second half that I didn’t love.  It felt like they tried to squeeze too much story into this film.  There were some things that happened too easily or too quickly.  Sinestro  — probably the greatest Green Lantern villain — is wasted: he’s barely in the film.  (Also a problem: the film treats his involvement in the story as a big third-act reveal; which would have worked had his face not been huge on the film’s blu-ray cover.)  And they tried to squeeze the whole Hal Jordan Parallax story-line into 5-10 minutes at the end of the film, which I think was a big mistake and a waste of an interesting storyline.  (And while I know superheroes are often breaking out of cells in supervillain lairs with ease, the way our gang got out of Sinestro’s prison seems particularly silly and too-easy to me.)

I’d also have liked to have seen a little more emotional depth to the characters.  They start to build up some PTSD for John Stewart in the film’s opening, but they didn’t really explore that as much as I’d have liked.  At one point in the film, John advocates for helping a Rannian soldier, who then turns around and uses his newly-repaired ship to murder more Thanagarians.  I thought that would have set off a crisis of guilt in John, but in the film he has basically no reaction.  That was a surprise and felt like an example of the missed opportunities for character development in the film.

I enjoyed Green Lantern: Beware My Power.  I think this new continuity is off to a good start so far.  I’m interested to see where these characters go from here.  I just wish that these new films could recapture for me the magic and excitement of those classic Bruce Timm animated series (Batman: The Animated Series, Superman: The Animated Series, Batman Beyond, Justice League, and Justice League: Unlimited).  I’d like to see these films take a few more risks and to get deeper into the characters.  I’d like to start seeing more emotional payoffs to the continuity between these films, the way we’ve seen to such great effect in the MCU, in which characters deepen and change over multiple films.  I want to feel more of a connection to these characters and this superhero universe.  Come on, DC!  You can do it!!